The political establishment has chosen their next battle: they’re attacking Missouri voters’ right to vote on a proposed Anti-Corruption Act. Clean Missouri, a local, grassroots organization, submitted over 300,000 signatures from Missouri voters with help from Represent Missouri members in support of this people-led reform initiative, known as Amendment 1. Now, lobbyists are suing to remove the measure from the ballot—but the people are fighting back.

On September 14th, Cole County Circuit Judge Dan Green ruled against the people’s will and removed Amendment 1 from the November Ballot. Supporters in Missouri vow to immediately appeal the decision, and legal briefs for the appeal have already been filed.

This lawsuit is part of a bigger trend nationwide—across the country, special interests are rigging the system to silence voters—but we’re doing something about it. We’re going to go state by state to pass powerful anti-corruption legislation to stand up to the rigged status quo. We need to show that everyone in the country is watching and they can't quietly silence the voters.

Why Do Missouri Lobbyists Want to Stop a Vote on Anti-Corruption?

According to a Clean Missouri lobbyist gift report, there are no limits right now on how many gifts paid lobbyists can give to Missouri lawmakers as they seek to influence state policy. Free meals, drinks, sports tickets, rounds of golf and travel have all become part of the game in Jefferson City — to the tune of almost $1 million worth of freebies every year.

It gets worse. ​More than two-thirds of gifts are reported in an opaque way using the group gift loophole crafted by the General Assembly which hides the true taker of gifts that purportedly go to “groups.” In fact, the St. Louis Post released a scathing article from their Editorial Board titled "Eat, drink and be corrupt — the Missouri Legislature's way."

No matter what party you believe in, this isn’t right. Here are some key facts about lobbyist gifts in Missouri: 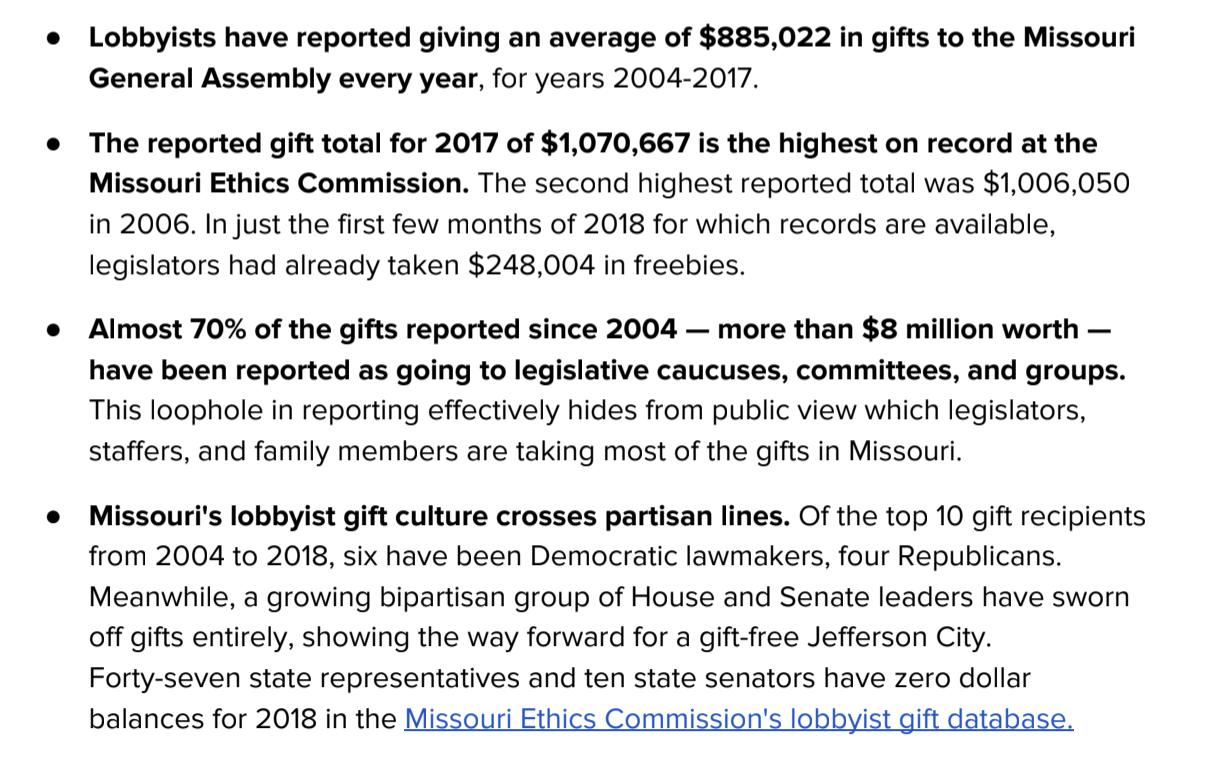 This grassroots anti-corruption campaign rises above the toxic partisan bickering we see in Washington, and brings local people together to fight corruption in Missouri. Amendment 1 is designed to clean up Missouri politics. It’s a strong, bipartisan effort to make government more transparent, limit the power of big money in the Missouri legislature, and hold legislators accountable when they fail to act in the public interest.

But special interests and lobbyists are trying to undermine that. The lobbyists behind the lawsuit are the CEO of a dark money group, a lobbyist who charged the taxpayers $340 an hour to defend Missouri’s disgraced former governor, Eric Greitens, and a lobbyist who sent threatening letters to government workers in an ethics investigation. They’re suing to prevent voters from fixing a broken political system. The very nature of this lawsuit is undemocratic - if they disagree they should run their own campaign, and let the people choose. This backroom dealing goes against the very principles of our Republic.

These Attacks are Happening All Across the Country

This lawsuit is part of a bigger trend nationwide—across the country, special interests are trying to silence voters before they have an opportunity to vote on political reform. This is the exact same underhanded attack that special interests attempted in Michigan last month. The Michigan Chamber of Commerce backed a lawsuit to remove an anti-gerrymandering measure from the ballot, but RepresentUs members fought back to protect the right to vote on it. We sent letters, published ads, organized rallies, and showed special interests that Americans won't allow them to take away our right to vote without a fight. We kept anti-gerrymandering on the ballot because hundreds of thousands of people heard about the attack on the voters and took direct action to stop it.

Michigan and Missouri aren’t the only states facing this fight. In Maine, politicians began to repeal a voter-approved ranked choice voting law, but the people passed a People’s Veto ballot measure in June to override the legislature. In South Dakota, the voters passed a strong statewide Anti-Corruption Act—but the legislature brazenly overturned it.

These corrupt tactics overrule the will of the people and delay common sense reforms. This pushback from the political establishment is alarming, but the anti-corruption movement isn’t slowing down.

This is a Historic Year in the Fight for Political Reform

There are more political reform campaigns this year than at any time since Watergate. Check out the anti-corruption movement map to see the cities and states where reform campaigns are underway right now.

In South Dakota, where the legislature brazenly repealed reform, every political candidate is running on an anti-corruption platform and the voters are pushing to pass an Anti-Corruption Amendment. After seeing what happened in South Dakota, RepresentUs members and leaders in North Dakota started a statewide campaign to pass an Anti-Corruption Act in North Dakota this November.

Lobbyists and special interests are rigging the system against everyday Americans—but we are fighting back. Every time we win, it weakens the political establishment and builds our movement's power. We already won this year in Michigan, Maine, Alaska, Ohio, and more. We can win in Missouri, too—but only if we speak out and show the political establishment that the voters are watching, and we demand our right to vote.