With less than 40 days to go, we’re rapidly approaching the 2022 midterm elections. And we all know what that means: more political ads on TV, more election robocalls and mailers, and more candidates popping up at events in our communities. It’s everyone’s final chance to make their pitch about why this election is so important.

Countless important races and issues will be decided on November 8. But if you asked us at RepresentUs why the midterms matter, we have a clear answer: Democracy itself is on the ballot.

Americans currently rank threats to democracy as our number one concern. There are many reasons for this, including dark money buying elections and politicians rigging voting districts to benefit themselves.

But in November, voters will have the opportunity to address some of these threats – literally. Here are three reasons why democracy is on the ballot this midterm season, why you should pay close attention, and how you can get involved.

Election liars are on the ballot

The true test of a democracy is whether the loser of an election accepts the result. This year’s midterms will be a test that none of us can afford to lose. 60 percent of Americans – in nearly every state – will have at least one candidate on their ballot that is lying about the integrity of our elections. Hundreds of them have rejected the 2020 election results, or raised unsubstantiated questions about the outcome. Many refuse to commit to accepting future results they disagree with.

In order to have a healthy government, we must all accept that voters decide who represents us. When corrupt politicians try to use the levers of power to alter election results, it undermines our democracy.

To prevent this hostile takeover of our elections, we all have to get involved. That means learning about the candidates running to serve us and voting for people who will respect the integrity of our elections. It’s on us to deny anyone who questions the legitimacy of our democracy the chance to mess with future elections.

Threats to direct democracy are on the ballot

Politicians don’t like it when voters have too much power. So as we speak, they’re working to make it much harder – impossible, even – for voters to use our power to pass laws. Just last week, we put out new research and an interactive map that shows the nationwide threat to the ballot initiative process – also known as direct democracy. 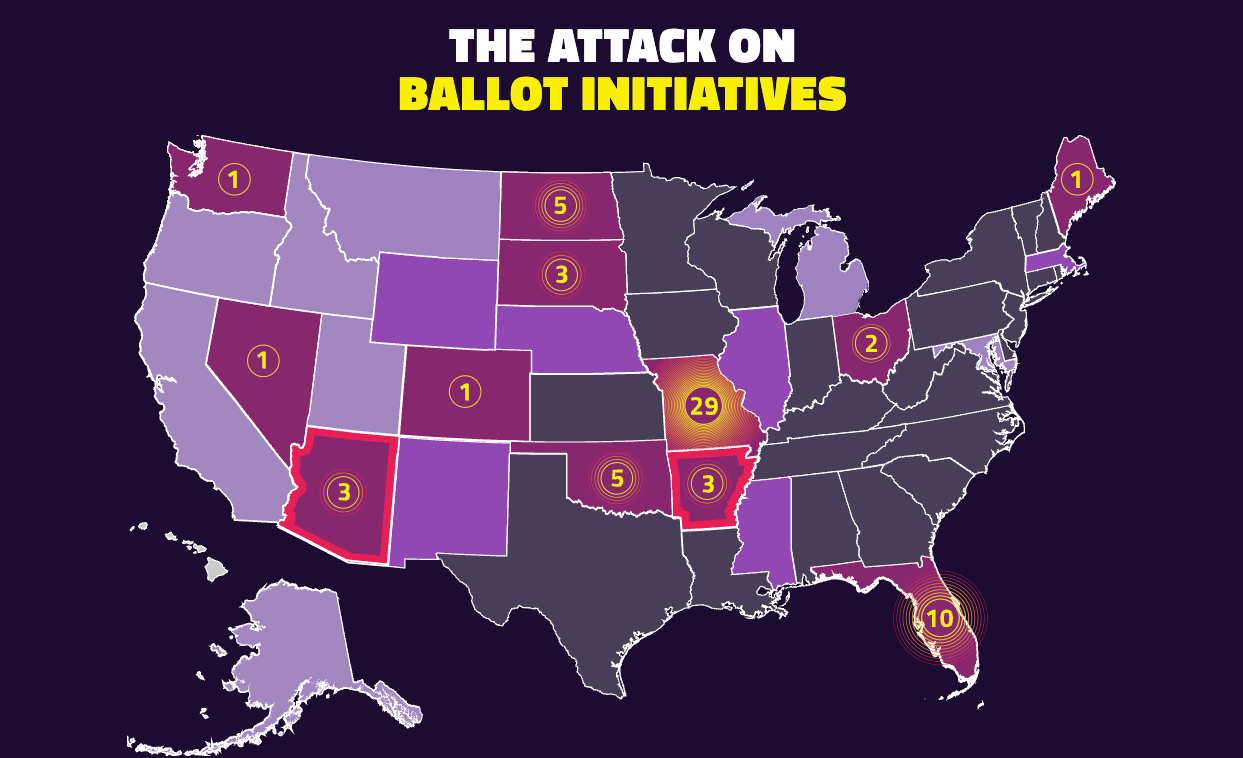 The ballot initiative process is an essential way for voters to pass laws when their elected officials fail to act. While the process varies from state to state, it allows voters to place important issues directly on the ballot. The proposal is then presented to all voters in an election, who decide whether it passes or fails.

In the last five years, our research found that elected officials and dark money groups in 11 states have proposed at least 64 bills to change the rules in their favor. Specifically, they want to impose a supermajority rule – requiring as many as two-thirds of voters to approve rather than a simple majority – to pass an initiative.

It’s much harder to pass initiatives under a supermajority requirement. Countless important laws – from women’s suffrage and marriage equality to ethics reform and Ranked Choice Voting – would never have passed under the rules these politicians want.

The 2022 midterms will set a record for the number of attacks on the ballot initiative process in the past 30 years. In Arkansas and Arizona, voters will have the opportunity to reject supermajority measures. In a big win for direct democracy, South Dakota voters defeated an attack on the initiative process in June.

Laws that take power back from politicians are on the ballot

It can be easy to fall into doom and gloom about the state of our elections. But it's important to remember that in November, we also have a chance to pass many important anti-corruption laws. In cities and states across the country, voters have opportunities to expand Ranked Choice Voting (RCV), defend the ballot initiative process, and tackle dark money in politics.

RCV is an exciting and popular improvement to our elections that allows voters to rank candidates in order of preference. Once all the votes are counted, this system ensures that winning candidates receive a majority of votes. This leads to politicians that are much more representative and responsive to the voters who elected them.

RCV is on the ballot in places including Nevada, Portland, Ore., Evanston, Ill., and Fort Collins, Colo. Additionally, Alaska will hold its first general election under its new RCV system. The state recently held a special election for its seat in the U.S. House of Representatives under the new rules and it was a wild success with a high turnout and a winner who received a majority of votes.

Voters in Arkansas and Arizona will have the opportunity to protect the ballot initiative process. And Arizona, Oakland, Calif., and Portland, Maine will all vote on ballot measures to increase transparency around money in politics.

All in all, these anti-corruption ballot measures will bring fairer, more representative elections to their communities. We look forward to adding them to our list of over 160 victories protecting democracy and fighting corruption!

The midterms matter – get involved!

There are many reasons that this year’s midterms will matter for future elections. Democracy itself is on the ballot in some form just about everywhere. We have the opportunity to send a loud and clear message that it is alive and well. We will tell opponents of democracy that they will not be able to undermine our votes as they please.

Everyone can do something. The first step is to make sure you are registered to vote. From there, consider volunteering to be a poll worker to deny election liars the chance to manipulate results from the inside. Finally, read up on your local ballot measures and see if you can help get them over the finish line. We’re also hosting an event next week featuring leaders from key campaigns that RepresentUs is supporting – join us!