With the midterm elections quickly approaching, a recent poll offers some clues about where Americans’ heads are at. In that poll, voters ranked “threats to our democracy” as the number one issue facing the country.

Here are 10 reasons why Americans see the threat to democracy as their most pressing concern.

Our broken campaign finance system means politicians spend way more time fundraising than doing their job: working to pass laws. Massive amounts of dark money have been unleashed in our elections, with each election season getting more and more expensive. In fact, the 2020 election was the most expensive ever – nearly doubling the previous record in 2016. Politicians must raise ludicrous amounts of money just to stay relevant and run their campaign.

Not only is the sheer amount of money a problem – it’s the extent politicians must go to raise it. Candidates spend several hours a day calling donors or attending lavish fundraising events. As a result, they’re mostly interacting with people who will donate thousands or millions of dollars to them. The interests of those folks are not representative of the country as a whole.

Which brings us to…

Turns out, when you don’t listen to the majority of people, you often act in ways that are contrary to public opinion. A comprehensive study by Princeton and Northwestern professors examined more than two decades of data to answer a simple question: Does the government represent the people?

The results are unsettling: The opinions of 90% of Americans have essentially no impact at all.

According to the study, the vast majority of people have a “statistically non-significant impact” on public policy. Who does? Economic elites, business interests and people who can afford lobbyists.

When only the well-connected and well-funded can influence public policy, our democracy starts to look more like an oligarchy – where moneyed interests get what they want, and the rest of us pay the price and feel like we’re screaming into the void.

3. Politicians rig their own elections with gerrymandering

Most of us agree that voters should choose their elected representatives, not the other way around. But through gerrymandering, politicians can draw voting maps that essentially guarantee their political party will win the next election.

There are many infamous examples of congressional and state legislative districts that look more like inkblot tests than an attempt to group communities together in an unbiased way. Gerrymandering is one of the worst forms of political corruption because it dilutes the voices of voters, leaving Americans feeling like their vote doesn’t matter. Partisan gerrymandering often results in uncompetitive elections and politicians who don't represent the interests of their constituents. If you live in a gerrymandered district, you may have little to no hope of ousting a power-hungry elected official. 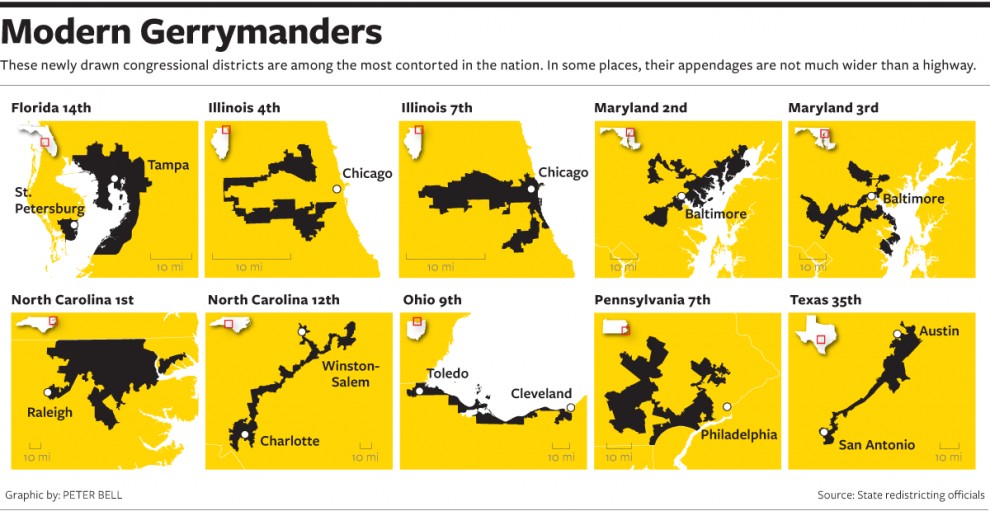 4. Elections and election workers are being harassed

Rampant misinformation about the 2020 election has resulted in an unprecedented level of harassment directed at nonpartisan election workers. Many have decided to retire or resign rather than face the vitriol.

Nonpartisan election administration has long been the backbone of our democracy. Free and fair elections are at risk if too many of these public servants resign.

5. We’re stuck in a lesser of two evils doom loop

Our elections are locked in a two-party system that restricts voters’ choices. In that system, it’s nearly impossible for independent or third party candidates to gain traction. And it forces politicians to think primarily about taking down the “other side” to gain a narrow electoral victory rather than try to advance the best ideas. Voters are told they should choose the “lesser of two evils,” even when there is another candidate on the ballot they’d rather support.

Around the world, multi-party democracies tend to see higher turnout and engagement and less partisan vitriol than we see here in the U.S. Our winner-take-all voting system means only Democrats and Republicans stand a real chance of winning. By voting for someone else, voters risk "spoiling" the election for a candidate they disapprove of, causing the erosion of trust in our two-party system. Worst of all, this system means that in a crowded race politicians can win an election without winning a majority of support from the voters.

6. Lobbyists and big donors set the agenda and write our laws

Lobbying, the act of advocating a particular position to an elected official, is a constitutionally-guaranteed right to influence public policy. At its core, there is nothing wrong with voicing your opinion to elected officials. The problem comes when high-paid lobbyists use loosely-regulated money, gifts and favors to influence politicians and dictate the policy agenda.

And because politicians spend most of their time fundraising, they don't have time to write laws – so corporate and private lobbyists have been allowed to step in and effectively write the laws that Congress passes with little scrutiny. By cracking down on the policies and loopholes that allow special interests to effectively bribe members of Congress with campaign contributions and job offers, we can restore common sense to Congress. If an individual or group wants to lobby Congress, they should be able to do so without bribes and special favors.

7. Voters are left in the dark about who is trying to influence elections

Dark money – funds to influence an election that come from undisclosed sources – erodes trust in our elections. By definition, it shrouds the information voters receive in secrecy. When a dark money-funded ad comes across your TV, phone or mailbox, it is next to impossible to know who is paying for you to see their message.

Dark money enables billionaires and corporations to influence our elections with unlimited cash without us even knowing it. If someone wants to influence an election, they should be required to put their name next to their money – and there should be limits to their spending. 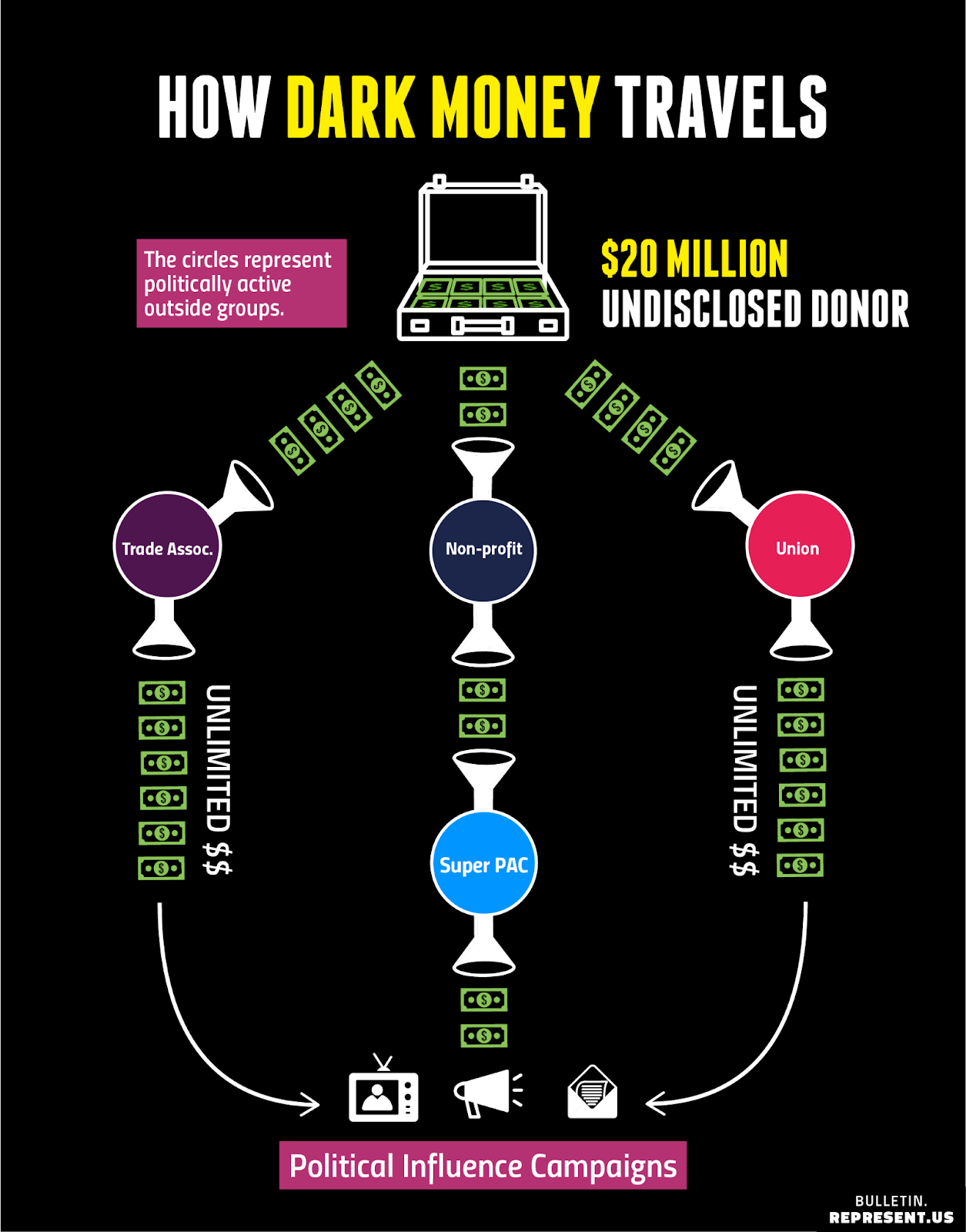 8. Politicians are trading stocks and making decisions that enrich themselves

There is perhaps no bigger conflict of interest impacting Congress than when members are allowed to buy, hold and sell stocks while in office. Instead of acting on behalf of their constituents, members of Congress are allowed to act based on their stock portfolio – despite federal law technically making this illegal. Due to flimsy reporting requirements and measly fines, politicians have little reason to be transparent about their financial interests and how their actions in Congress impact their finances.

The COVID-19 pandemic demonstrated just how rampant insider trading is in Congress. Members of Congress are privy to lots of nonpublic information, which they can then use to decide which stocks to buy and sell as they choose. Without stronger ethics laws, voters can’t be confident that their elected officials are acting in their best interest.

9. Partisans are trying to take over elections and maybe overturn results they don’t like

Perhaps the greatest immediate threat to our democracy is the legion of extremists planning to overturn any election results they disagree with. January 6th showed us just how dangerous election lies can be and right now, a well-funded movement is attempting to make overturning election results a “normal” part of election administration.

10. Trust in our government and politicians is at an all-time low

Public trust in the federal government has slowly degraded over time, with just two in ten Americans now saying they trust the government to do the right thing. For all of the reasons listed above, Americans feel like the elected officials who are supposed to represent them are merely serving their own interests while the rest of us get left behind.

With all of these clear threats to our democracy, it is clear why voters rank them as the top issue for this year’s midterms. Now is the time to take a serious look at what candidates plan to do to protect our democracy. It can feel overwhelming to have to fight the ominous, well-funded forces that are intent on undermining democracy and installing their unpopular ideas on the country. But we cannot give up hope because that is exactly what the extremists want. When we come together, we win!

So step one, make sure you’re registered to vote! Step two, research the candidates running to represent you and make sure they are committed to protecting democracy. And step three, sign up below to join us in the pro-democracy movement!