Ballot measures have long been a crucial way for American voters to fight for change through direct democracy. In 1918, Oklahoma voters granted women the right to vote two years before the 19th Amendment was ratified. A 1923 ballot measure passed by Ohio voters changed the state constitution providing “every citizen” the right to vote, rather than only “every white male citizen.”

However, not everyone loves direct democracy. A growing number of states are seeking to restrict this right and prevent American voters from using their collective voice to enact policy change. According to our research, 11 states have proposed 64 bills restricting ballot measures by requiring a supermajority approval in the last five years. A supermajority requirement is a law stating that ballot measures require more than a simple majority to become law. (A simple majority is a one-time 50% plus one vote on a measure.)

Although none of these supermajority requirement measures have passed, more and more are popping up recently. And two are on the ballot this fall in Arkansas and Arizona. 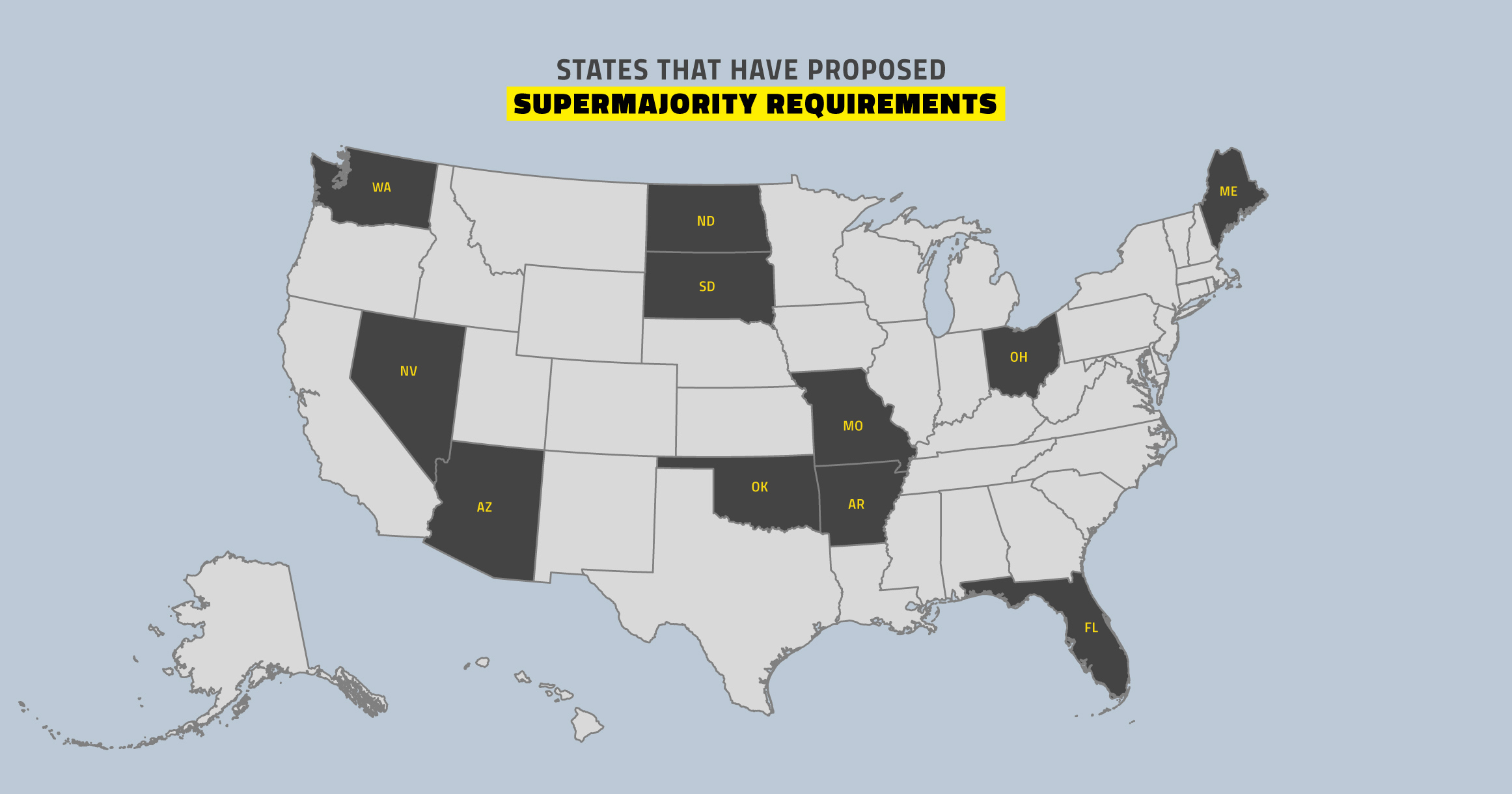 What is a ballot initiative?

Ballot initiatives, a form of ballot measure, are one of the purest forms of American democracy. The rules and processes vary from state to state and city to city. But generally speaking, ballot initiatives start when a group of citizens come together around an issue of law or policy and decide to take matters into their own hands.

After navigating a number of legal and procedural hoops to vet their proposed law, citizens must then collect a designated number of signatures that demonstrate support from other voters in the community. If all requirements are met, their proposed law becomes a question on the ballot. Voters get to decide on whether or not it’s implemented. That’s as direct as democracy gets.

Overall, 26 states have a ballot initiative or veto referendum process. In states where ballot initiatives are legal, citizens regularly exercise their rights to advance causes and improve their lives. One of the most notable recent examples of a successful ballot initiative was in Florida in 2018. That year, nearly 65% of Florida voters supported restoring voting rights to about 1.4 million Floridians who had been convicted of a felony.

Unfortunately, when citizens enact popular measures that threaten politicians’ power or interests, they often try to fight back. In the states where ballot initiatives are legal, members of both political parties have attempted to make passing them more difficult.

One of the most common ways they try to do this is by raising the threshold for passing a ballot initiative, such as implementing a supermajority requirement. In 2016, Democratic-controlled Colorado increased the threshold for passing ballot initiatives to 55%. And this year, two similar bills are on the ballot in Arkansas and South Dakota, despite the fact that South Dakota voters rejected a similar bill in 2018.

Why does raising the threshold matter?

Raising the threshold to pass initiatives and other ballot measures would have severe consequences for direct democracy. Many crucial ballot measures in America’s history would not have passed if the threshold had been 55 or 60%. Oklahoma’s 1918 measure to grant women the right to vote passed with 56.70%. North Dakota’s 2018 measure creating an ethics commission, banning foreign contributions, and addressing lobbying and conflicts of interest issues passed with 53.6%. And Maine’s legalization of gay marriage in 2012 passed with a slim majority of 51.5%.

In fact, our research team found 17 notable examples of groundbreaking and historical ballot measures, among many others, that would have never become law with supermajority requirements.

By raising the threshold, these states hope to create another barrier to prevent voters from exercising their rights.

In Missouri, Arkansas, North Dakota, and South Dakota, RepresentUs has been working hard to pass good-governance ballot initiatives. In 2018, Missouri voters passed Amendment 1, which restricted gerrymandering and political corruption. RepresentUs partnered with politicians on both sides of the aisle and went door to door talking to voters to gain support for the measure.

That same year, voters in North Dakota voted to approve Measure 1, which increased transparency and accountability, rooted out conflicts of interest, restricted lobbyist gifts, and tightened campaign-finance laws. Just like in Missouri, RepresentUs worked with local partners and recruited volunteers to promote the benefits of this measure, resulting in a resounding pro-democracy victory.

This year, we’re supporting a couple of exciting state and city ballot measures to improve elections in Nevada and Portland, Ore. If voters approve the Better Voting Nevada Initiative, the state would scrap partisan primaries in favor of open nonpartisan primaries and RCV general elections. Portland voters are also set to decide on whether or not to adopt proportional RCV for city elections.

RepresentUs will keep monitoring threats to direct democracy, and continue using the process in states that have it to pass pro-democracy laws.

With these exciting victories for democracy around the country, we’re just getting started. If you’d like to join us in the fight to protect ballot initiatives and promote good governance, sign up for our newsletter below!