Redistricting maps released by Colorado and Ohio this week illustrate the stark contrast in the states’ methods, according to the Redistricting Report Card from Princeton Gerrymandering Project and RepresentUs. The Report Card gave Colorado’s congressional map an A, while Ohio’s Statehouse and Senate maps got an F and B, respectively.

This is the first redistricting cycle under the Colorado Independent Redistricting Commission, which was created by the passage of two voter-initiated amendments in 2018. In June, the Commission released a draft congressional map using American Community Survey (ACS) data to elicit public feedback. They then re-issued the draft map on September 3, incorporating both updated Census data and public feedback, and then further refined the map on September 15. All of the commission’s proposed maps to date have earned A grades, meaning they give no explicit electoral advantage to either party. A final map will be proposed next week ahead of the Commission's September 28 deadline to approve a final plan.

In contrast, Ohio released draft maps on September 9 for its statehouse and state senate maps, only six days prior to the commission’s statutory deadline for passage. Ohio’s Statehouse map received an overall score of F because it gives significant advantage to Republicans. Maps were only marginally revised before their adoption on Wednesday night, resulting in another F map without bipartisan support that will only be adopted for four years.

“The vast majority of Americans despise gerrymandering, and want the map-drawing process to be free from partisan influence. Clearly, Colorado passed that test and Ohio didn’t,” said RepresentUs CEO Josh Silver. “Maps are starting to come out at a rapid pace, and we know that 35 states are at high or extreme risk of partisan gerrymandering. This is exactly what the Freedom to Vote Act seeks to fix. If passed, partisan gerrymandering would be illegal in all 50 states.”

The Redistricting Report Card utilizes a unique algorithm that generates 1 million districting plans for each state. The tool compares maps against the full range of possibilities -- both good and bad -- and issues grades based on criteria including partisan fairness, competitiveness, and geographic features. A grade of “C” is considered average.

Below is a summary of the findings for the Colorado and Ohio maps, along with in-depth analysis. You can find more details on the Redistricting Report Card website, and information about the scoring process here. 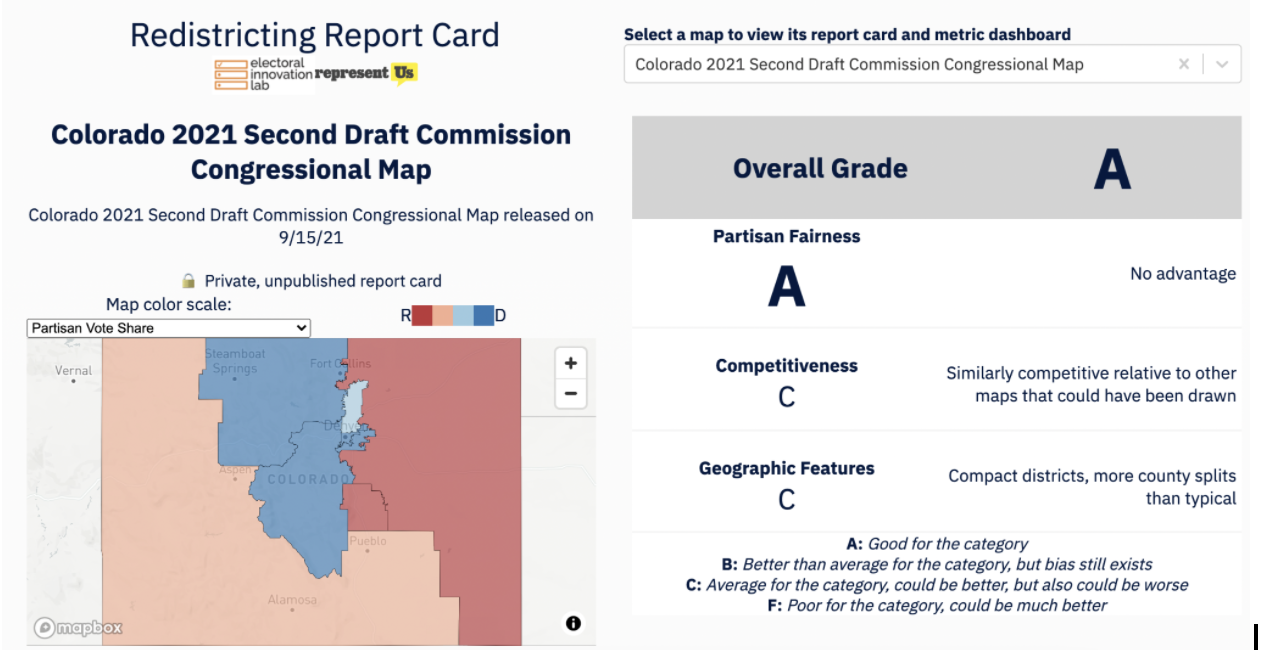 Partisan Fairness: A / No advantage to either party

Summary: Maps fall within the fair range for partisan fairness metrics and are not outliers when compared to a million simulated Colorado congressional maps that also follow state criteria and federal requirements.

Summary: The map falls below the fair range for partisan fairness when compared to a million simulated Ohio House maps that do achieve fairness metrics.