FLORENCE, Mass. -- There are few issues that bring Trump and Biden voters together like their opposition to partisan gerrymandering, according to a new poll from RepresentUs. More than 90 percent of voters surveyed want fair voting maps that do not benefit their political party. The poll comes less than two weeks before the U.S. Census delivers population data states on August 16, and when politicians can start drawing district lines that will be in place for the next decade.

The RepresentUs nationwide poll of 500 voters, administered by YouGov, took place between June 30 and July 8.

Gerrymandering is when politicians manipulate voting maps to get desired outcomes, picking their voters and giving an advantage to political parties. This practice is opposed by 88 percent of respondents who voted for former President Trump and 92 percent of those who voted for President Biden. 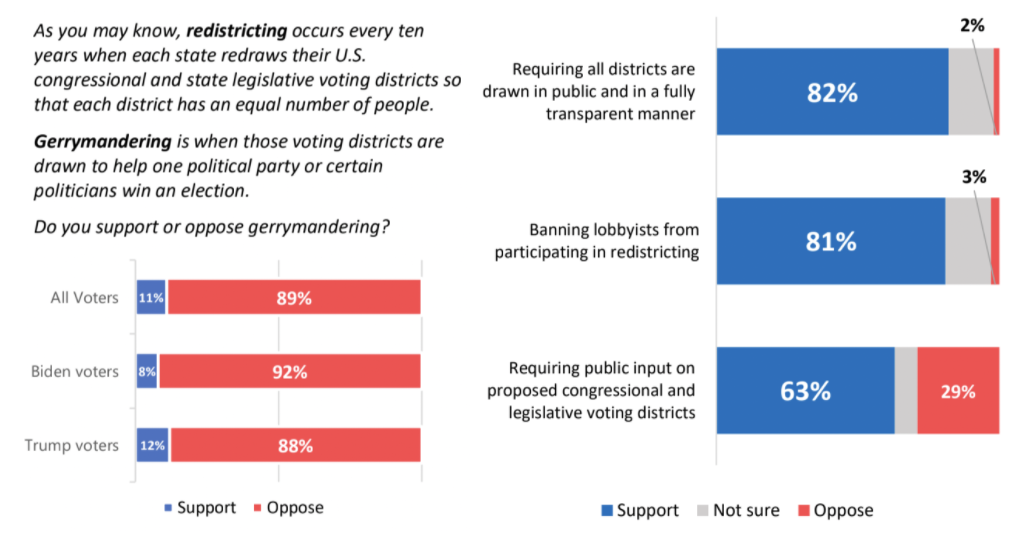 The RepresentUs Gerrymandering Threat Index shows that 35 states, including both blue states and red states, are at extreme or high risk of gerrymandering this cycle.

“This poll is unequivocal: voters across the political spectrum abhor gerrymandering, and they’re willing to look past their immediate partisan interests to achieve a functioning democracy,” said Josh Silver, former CEO of RepresentUs. “Partisan gerrymandering is one of the most nefarious forms of political corruption, disenfranchising millions of Republicans, Democrats and independents. It’s not hard to see why nearly everyone wants to see this practice banned once and for all.”

Voters also broadly agreed that they didn’t trust state legislatures to draw districts, with nearly 70 percent in favor of prohibiting state politicians from participating in redistricting. But they also agreed on key solutions that would help restore trust in the system, including requiring transparency in the process (82 percent) and banning the influence of lobbyists and special interests (81 percent). Nearly 60 percent also indicated that they would have more trust in elections if leaders in both major parties agreed that the new maps were fair.

The results from this new poll suggest that removing control of the process from partisan entities would give voters more faith in government.

Add your name below to join us in fighting back partisan gerrymandering.