Activists kicked out of the building for seeking a meeting with Deloitte's Mark Davidoff. 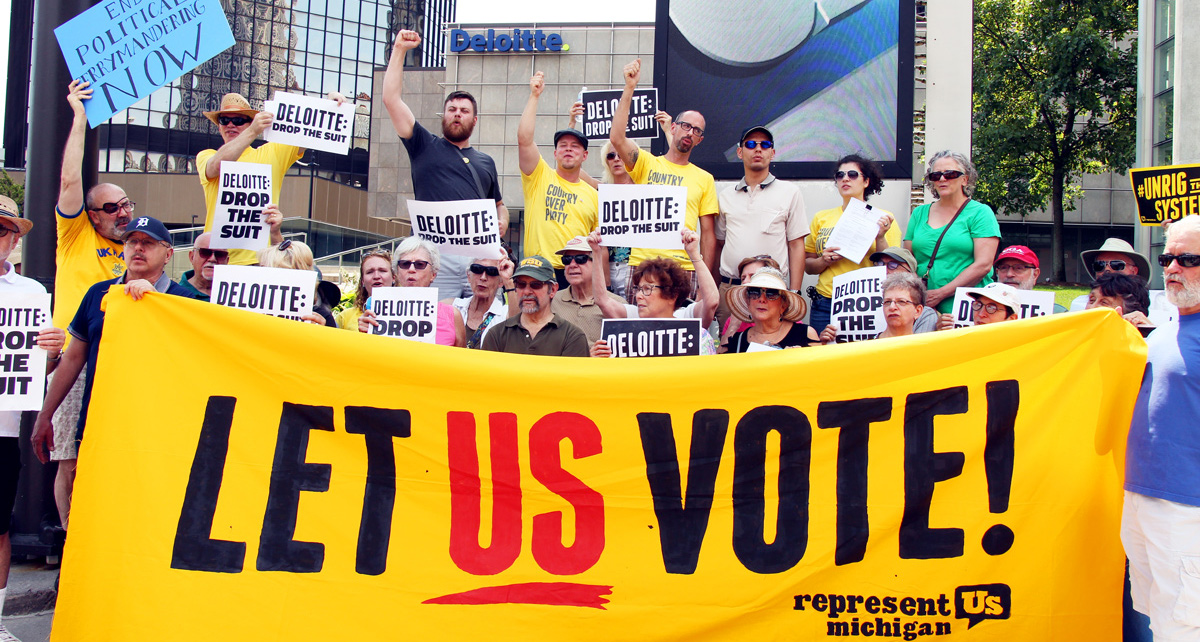 Dozens of Michiganders protested outside the Deloitte offices in Detroit to demand that Mark Davidoff, Chair of the Michigan Chamber of Commerce, drop the lawsuit to remove America's most impactful anti-gerrymandering initiative from the November ballot.

They were joined by people from across the America who took photos in solidarity and asked Deloitte on social media to #DropTheSuit.

People all over the country have asked Deloitte to stop backing the lawsuit and signed a petition to Deloitte's Managing Partner, Mark Davidoff, telling him to drop the suit.

The protest, led by Represent Michigan chapters, started with a march to Deloitte's Detroit office entrance. Represent Detroit chapter leader Emily Wietecha led a group inside the building to meet with Mark Davidoff, get him to go on the record supporting or denouncing the lawsuit, and deliver petition signatures.

But the group was turned away by security guards who declined to even take the petition signatures. (They did, however, say they liked what we were doing.)

You can watch the entire protest via the Facebook Live streamed from a protest attendee, or see highlights from MLive here. The protest has been covered by Michigan's NPR station, Detroit Metro Times, Crain's Detroit Business, and ClickOnDetroit.com.

Detroit Protesters Were Joined by Activists from Across the Country

In addition to the protest in front of Deloitte's Detroit building, people across the country (Massachusetts, Connecticut, California, Ohio, New Jersey, New York) went to their local Deloitte office buildings and took photos:

And people took to Twitter calling out the hypocrisy in a statement Deloitte released yesterday claiming they don't take positions on political issues such as this lawsuit:

The anti-gerrymandering initiative at stake in this lawsuit was approved for the ballot after 425,000 voters signed a petition in support of bringing it to a vote this November. The campaign is led by Voters Not Politicians, a grassroots nonpartisan coalition of thousands of volunteers in Michigan.

The initiative would establish an independent citizens redistricting commission instead of allowing self-interested politicians to choose their voters. There are a handful of other states with anti-gerrymandering measures on the November ballot, but Michigan is the state with the most gerrymandered seats in Congress. So, it's no surprise that special interests were ready with an attack to stop the people from voting on it. Before the initiative even qualified for the ballot, the Michigan Chamber of Commerce, chaired by Deloitte's Mark Davidoff, backed a lawsuit to remove the measure from the November ballot.

Who's Behind the Lawsuit, and Who Would Benefit?

Dark money groups are, well, hard to shed a light on.

But here's what we know about this attack and who's associated with it:

If this attack in Michigan is successful in stopping the vote, Michiganders won't even get the chance to decide for themselves whether to end gerrymandering. It would send the wrong message to special interests and corrupt politicians in all 50 states that they can take away our right to put anti-corruption initiatives to a vote.