You may have heard of gerrymandering before, but did you know that in September 2021, states started drawing our voting districts for the next ten years? If politicians gerrymander the maps this year, they’ll be able to pick their voters and rig districts to entrench their own power for the rest of the decade.

In an exclusive with Axios, RepresentUs experts released a report showing that 35 states are at extreme or high risk of partisan gerrymandering. That’s 188 million Americans living under the threat of gerrymandered districts. Map-makers are gearing up to redraw districts based on the new census data right now, so time is running out to stop the threat.

Here’s the ultimate guide to gerrymandering in 2021. Read on to learn how politicians gerrymander, which states most urgently need reform, and how passing the Freedom to Vote Act would end rigged election maps once and for all.

Gerrymandering occurs when politicians draw election district maps to loop in or exclude certain voters, effectively erasing votes so the incumbent party or politician can stay in power regardless of what the majority of voters want. The most common method of gerrymandering includes “packing and cracking,” where a politician rigs district lines that pack together supportive voters and break up unsupportive voters.

Every ten years, state and federal district maps are redrawn based on updated Census data during what’s called a redistricting process. If self-interested politicians are in charge of that process, they can gerrymander these districts to keep their grip on power — no matter what the voters want.

Gerrymandering is one reason why less than 10% of House races are competitive.

Right now, 35 states are at high or extreme risk of gerrymandering. This means more than half of America's vote could be completely skewed by unfair redistricting. These extreme-risk states are both red and blue, small and large, and located all over the map. Gerrymandering doesn’t only benefit one side of the aisle; it screws everyone — except establishment politicians.

This isn’t a partisan issue, it’s a power issue. To solve it, we need to return that power to the people — and it’s more urgent now than ever. Unfair redistricting now would rig elections until 2030. Is your state at risk? Find out here. 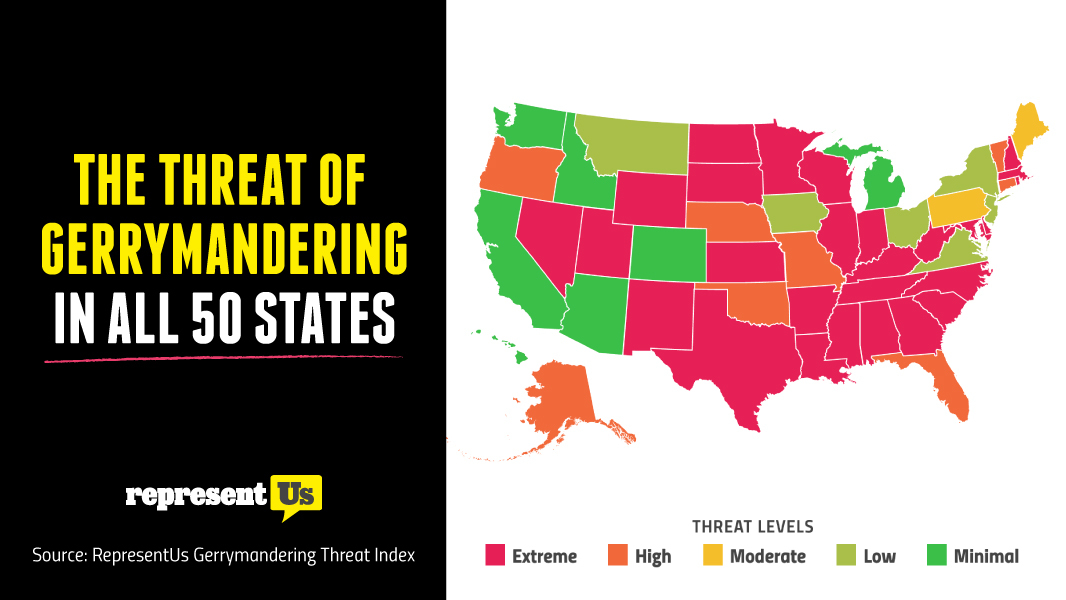 What puts a state at risk of gerrymandering?

Our policy experts examined the redistricting laws on the books in all 50 states, using five key threat criteria:

Based on these criteria, 27 states are under extreme threat of gerrymandered maps, 8 are at high risk, 8 have low to moderate risk, and just 7 states have sufficient protection against rigged elections. Read on to find out where your state ranks and then text 413-225-5100 to join the fight to defend fair maps and receive text alerts about how to fight back against gerrymandering in 2021.

Moderate-threat states are a mixed bag, with some good protections against rigged maps, and some key weaknesses. In these states, there is some threat that one faction will be able to dominate the process. The existing safeguards largely depend on the current political landscape.

The moderate-threat states: Maine and Pennsylvania.

Lower-threat states tend to have open map-drawing systems that prevent the worst gerrymandering, but may allow politicians more of a say in the design. The systems in place in these states have consistent strengths and a varied set of weaknesses: some have looser legal standards, while others limit transparency or allow for some partisan decision-making.

Minimal-threat states have stronger protections against rigged maps and clear, structured systems that encourage citizens to get involved. The map-drawing laws these states have put in place allow for more independence and require maps to earn cross-partisan support, drastically reducing the likelihood of rigged maps.

Why the threat of gerrymandered maps matters right now

Gerrymandering is about to get a lot worse in the next decade if we don’t act right now. After this year, we won’t have another chance to redistrict fairly until 2030, so maps that are rigged now will disenfranchise voters for the next ten years.

The pandemic has only worsened the situation. The Covid crisis delayed the release of new census data, creating a tighter deadline for redistricting and giving legislators the chance to cut corners by limiting public hearings and contestation of new maps.

Thanks to improved technology about voters’ locations and preferences, along with a 2019 Supreme Court ruling that federal courts can't consider partisan gerrymandering cases, corrupt politicians have more power than ever to limit competition and silence voters.

The good news is, there’s a movement of everyday Americans already fighting to take that power out of the hands of corrupt politicians and salvage fair, democratic political representation.

How do we end gerrymandering? Pass the Freedom to Vote Act

The Freedom to Vote Act is the most immediate, direct, and comprehensive solution – and it's already made it to the Senate. 25% of the nation’s congressional districts have a low risk of gerrymandering. If passed, the Act would outlaw congressional gerrymandering nationwide, making it the most powerful, efficient way to defend against this anti-democratic assault.

Anti-gerrymandering is just the tip of the Freedom to Vote Act’s anti-corruption iceberg: the bill will also stop billionaires from controlling our elections, secure our voting systems, end dark money, and so much more. Read about the vital reforms in the Act and then check out what you can do to make sure it passes.

We’re already on our way to ending gerrymandering

We know this kind of policy works. The anti-corruption movement passed a record-high number of similar state-level gerrymandering reforms across the country in 2018. These laws improved representation and opened elections up to greater political competition, allowing voters a wider array of options so they’re not stuck voting for the lesser of two evils.

But gerrymandering is a deeply-rooted, systemic problem that requires an equally systemic solution. As our democracy faces attacks on our Capitol, over 360 voter suppression bills, and a decade of voter disenfranchisement, the For the People Act offers a pathway back to political representation.

Join the movement to end corruption and pass the Freedom to Vote Act.