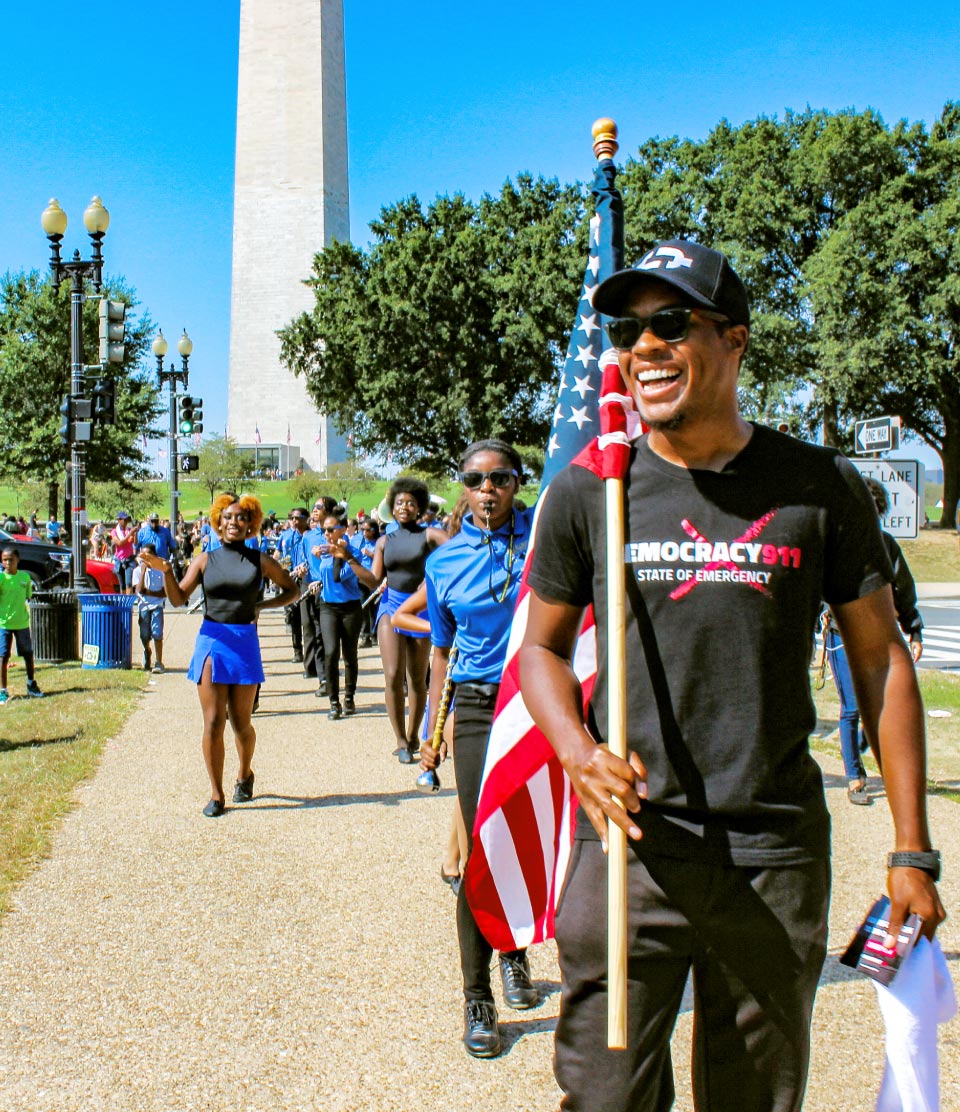 And with those words, Senator Bernie Sanders gave the anti-corruption and pro-democracy movement another boost, becoming the 15th presidential candidate (14th Democrat) to make the pledge to #FixDemocracyFirst if elected.

But of course that pledge didn’t come that easily. Just seconds before that, I had the chance to make the case to Bernie’s campaign Co-Chair, former State Senator Nina Turner in person (as I had done over email to her Co-Chair Ben Cohen and other campaign surrogates weeks before). I told her about my #Democracy911 walk from Atlanta to DC, to break the silence on our broken and corrupt democracy (especially in light of the unhinged voter suppression and unprecedented millions purged from the voter rolls in the wake of the Supreme Court's 2013 Shelby v. Holder decision, which gutted the 1965 Voting Rights Act), and how I was glad to witness the candidates and moderators finally break the silence on the debate stage the night before.

Then I asked her if we could now get a pledge from Bernie not just to “Fix Democracy,” as he was the first to do in 2016, but to #FixDemocracyFIRST, as 15 presidential candidates (14 Democrats) this cycle already had (most recently Republican Presidential Candidate Bill Weld; Tom Steyer before that, after I met him at the end of the #Democracy911 walk; Ben Gleib while sitting-in with me on the Capitol steps in DC; and, most prominently during the walk, Elizabeth Warren, addressing her largest crowd yet -- many thanks to RepresentUs partner Larry Lessig and End Citizens United on the foundational work they did to help on this front).

This is how we win. Breaking the silence -- one step, reform, debate, and candidate at a time.

Now, the remaining 7 presidential candidates must make the pledge to #FixDemocracyFirst, if we include Deval Patrick and Michael Bloomberg who recently joined the race. Of the 5 Democrats who’ve yet to make the pledge (including Cory Booker, who’s yet to confirm after preliminarily agreeing and directing me to confirm via his National Political Director over email), only 1 has qualified for the sixth Democratic presidential debate in December so far: Joe Biden.

Wherever you are, be it social media or a presidential town hall, ask these 7 candidates why they haven’t made the pledge to #FixDemocracyFirst -- since every other issue rests upon a fully functional democracy. Direct them or their campaign surrogates and staff to the 2020 Presidential Anti-Corruption Scorecard at either FixDemocracyFirst.us or simply FixItFirst.us.

Never before has there been more momentum to unrig our political system. In addition to winning the most anti-corruption and pro-democracy reforms in U.S. history last year (in both "red" and "blue" states, where over 80% of all voters, including 84% of independents, now want to see these reforms passed at the federal level), we just won Ranked Choice Voting in New York City last month (tripling the number of Americans using RCV) and over 20 other anti-corruption victories in states across the country this year (via ballot initiative, state legislation, and chapter resolutions).

Last month, RepresentUs also joined The Leadership Conference on Civil & Human Rights and a coalition of 150 other groups to release “#VisionForDemocracy: Fortifying the Franchise in 2020 & Beyond,” a policy platform which marks the overwhelming support for broad electoral reform -- and a platform that comprehensively builds on the three demands (protect our right to vote, make elections secure & competitive, and end political corruption) of both our #Democracy911 walk and #FixDemocracyFirst pledge.

Victor Hugo put it best, “Nothing is more powerful than an idea whose time has come.” Join us!