Last week, the Justice Department filed a federal lawsuit against Texas on the grounds that the state’s new state House and congressional maps violate the Voting Rights Act. The VRA prohibits gerrymanders that have the purpose or effect of abridging “the right to vote on account of race, color, or language minority status.”

So, it’s not surprising that the DOJ sued Texas. In fact, nearly two months ago I wrote about Texas’ proposed district maps that use racial gerrymandering to suppress the political power of minority constituencies. I predicted that the maps would proceed and be challenged in court. Not to toot my own horn – but boy – that played out exactly as I thought it would.

In the lawsuit, the Justice Department makes a strong case that Texas drew its maps to minimize the impact of Black and Latino voters. However, the partisanship and corruption that pervades our justice system will likely lead to the Supreme Court upholding Texas’ maps. If the Department of Justice brought this lawsuit nearly twenty years ago, it is more than likely that the lawsuit would prevail, and the Supreme Court would order Texas to redraw its maps. That said, over the past decade, the Supreme Court has dismantled key parts of the historic Voting Rights Act of 1965.

The repercussions of this Supreme Court case cannot be overstated. A ruling in favor of Texas could effectively strike down the Voting Rights Act – or what’s left of it – and open the floodgates for increased voter suppression and racial gerrymandering.

Before I dive into the specifics of the Supreme Court’s previous rulings on the Voting Rights Act, let’s quickly break down Texas’ abhorrent gerrymandering practices.

As the Justice Department’s lawsuit notes, from 2010 to 2020, “Texas grew by nearly 4 million residents, and the minority population represents 95% of that growth.” After the results of the 2020 census, Texas gained two more U.S. House seats – expanding their original 36 seats to 38 seats. In the once-in-a-decade redistricting process this fall, partisan Texas legislators drew maps so that both of the new districts would have white majorities. 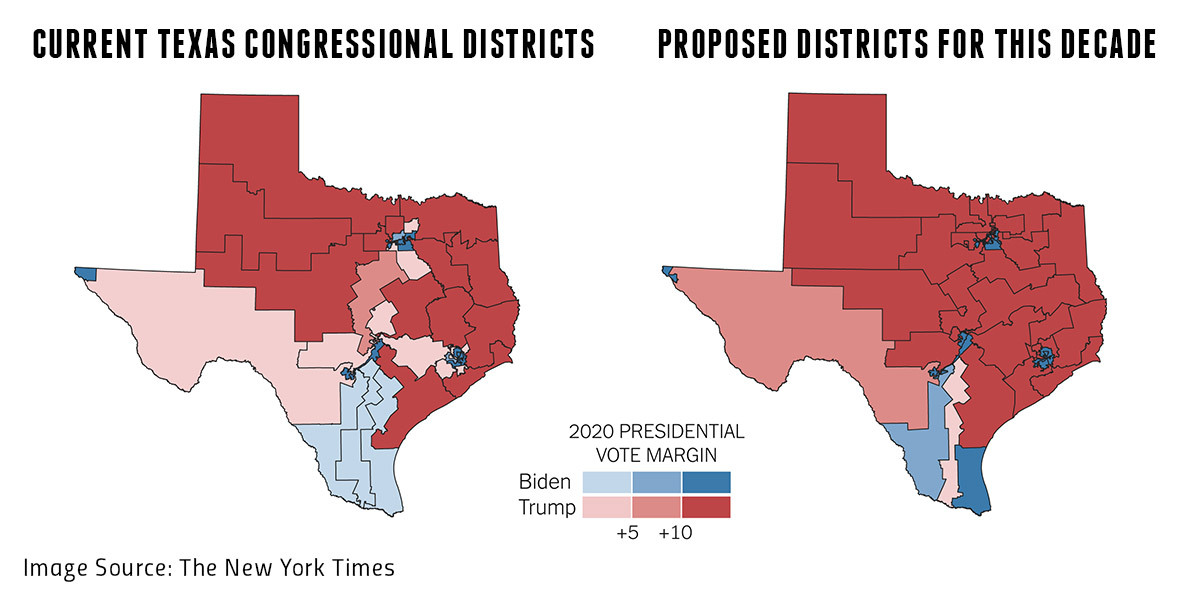 So, what does that mean? Even though Texas' population growth is entirely driven by its minority population, those same voters' voices are being diluted by racial gerrymandering.

Yes, these maps violate the Voting Rights Act. Yes, they are undoubtedly unconstitutional and undemocratic. But will the Supreme Court do anything about it? Recent decisions by the Court show that is unlikely.

Three Supreme Court rulings have progressively knocked down the Voting Rights Act: Shelby County v. Holder (2013), Abbott v. Perez (2018), and Brnovich v. DNC (2021). Here’s the thing: these court cases are inherently compounded with each other. You can’t get the complete picture of the coordinated attack on the Voting Rights Act without seeing how each domino has fallen to bring us to this very moment.

In 2010, officials in Shelby County, Alabama filed a lawsuit in federal court claiming that Section 5 of the Voting Rights Act was unconstitutional. Section 5 of the Voting Rights Act is a vital provision that requires jurisdictions with a history of discrimination to submit any proposed changes in voting procedures to the federal government before it goes into effect. This ensures that any changes don’t harm minority voters. 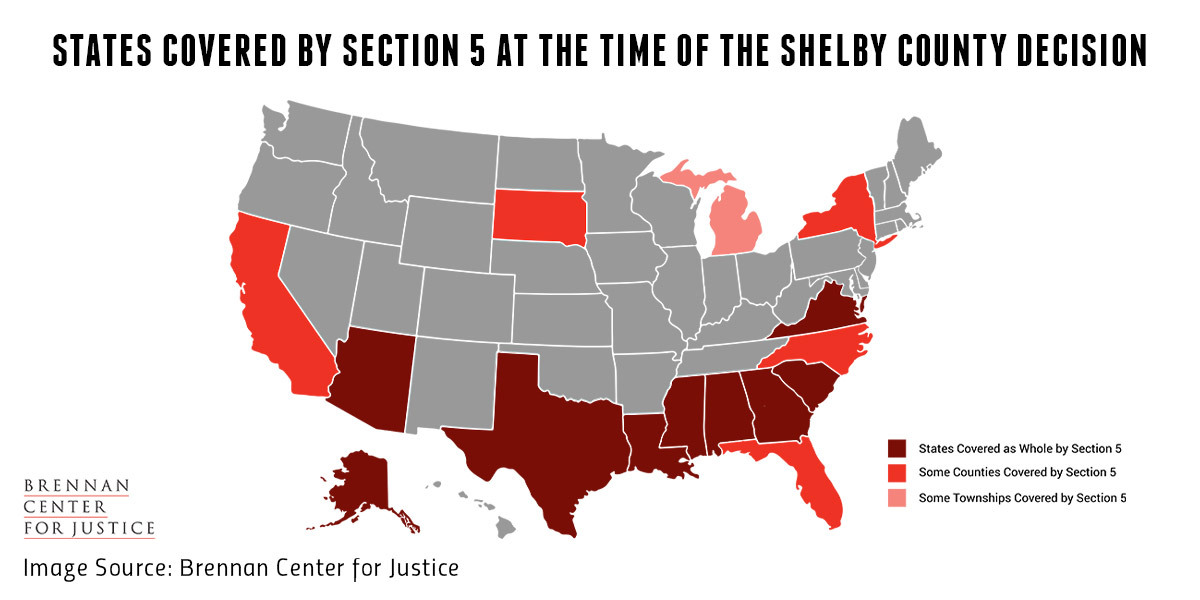 In 2011 and 2012, both the U.S. District Court for the District of Columbia and the U.S. Court of Appeals for the District of Columbia Circuit upheld the constitutionality of Section 5 of the Voting Rights Act. Shelby County appealed and took the case to the Supreme Court. On June 25, 2013, in a 5-4 ruling along partisan lines, the Supreme Court ruled that Section 4(b) of the Voting Rights Act, which uses a coverage formula to determine which jurisdictions are covered by Section 5, was unconstitutional.

That means the Supreme Court effectively scrapped Section 4(b) and Section 5 of the Voting Rights Act until Congress enacts a new, up-to-date coverage formula. Now, I’m sure you don’t find it shocking that Congress never acted, and therefore these sections are no longer upheld at the federal level. Despite congressional Democrats introducing legislation like the John Lewis Voting Rights Advancement Act to restore and strengthen sections of the VRA that were gutted in Shelby v. Holder, Republican obstructionists have consistently blocked the passage of such bills for their own political benefit.

And then, there’s Abbott v. Perez.

Warning: you may experience some major deja vu reading this one.

In 2011, individual voters and organizations representing Black and Latino voters in Texas filed a series of lawsuits alleging that Texas’ proposed congressional and state House maps violated Section 2 of the Voting Rights Act, which requires a certain number of minority-majority districts. Like in 2020, the 2010 census found that Black and Latino Texans accounted for nearly 90 percent of the state’s population growth. Despite receiving four additional congressional seats, Texas legislators intentionally diluted Black and Latino voting power by engaging in similar racial gerrymandering practices that we saw throughout the 2021 redistricting cycle. I warned you – deja vu.

The plaintiffs argued that Texas should be required to redraw its maps to create more electoral opportunities for minority voters. They also asserted that the state of Texas should be placed back under preclearance coverage of Section 3 of the Voting Rights Act.

Now, this is where it gets a little messy.

In 2012, the Western District Court of Texas ordered the state to draw interim maps for the congressional and state House districts while the challenged maps were in preclearance. In 2013, Texas adopted those interim maps permanently, but the plaintiffs continued to assert that those maps still discriminated against minority voters. 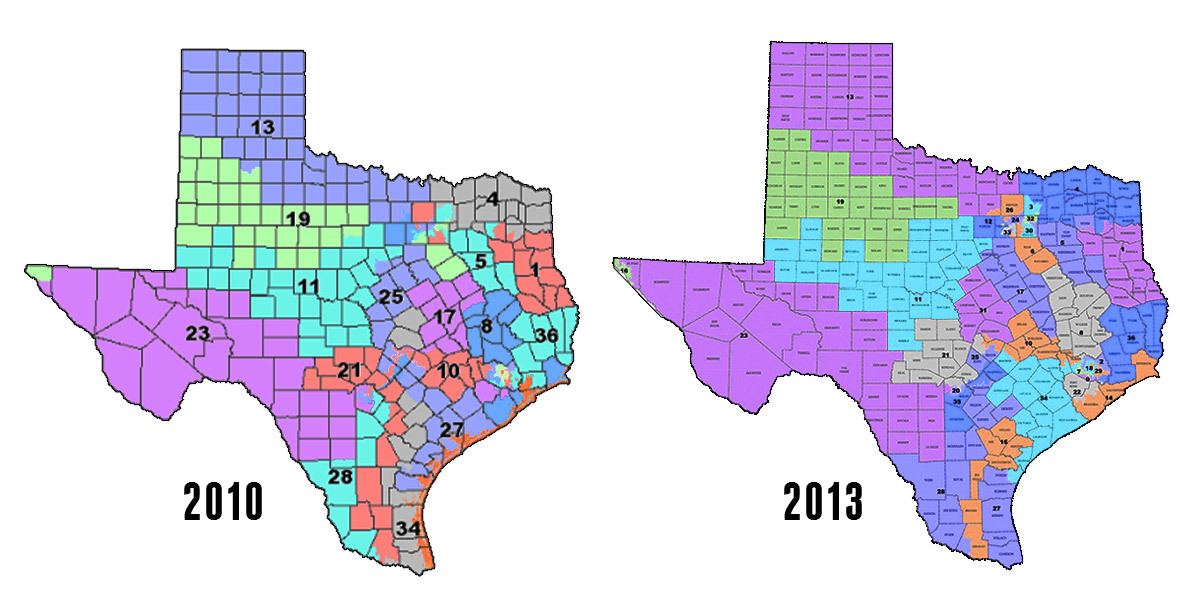 Flashforward to June 25, 2018. In a 5-4 decision – again along party lines – the Supreme Court reversed the lower court’s findings that the state legislature intentionally discriminated against Black and Latino voters in the redrawn 2013 congressional and state House maps. They even took it a step further and reversed the lower court’s findings that the maps violated the Voting Rights Act. So, what did the Supreme Court do to protect the rights of minority voters? Nothing. Absolutely nothing. Why should we believe they’ll do anything differently this time around?

And last but not least, we have Brnovich v. DNC, the most recent case.

The Democratic National Committee (DNC) and other civil rights organizations, like the ACLU, argued that two Arizona policies were racially discriminatory and violated Section 2 of the Voting Rights Act. Section 2 outlaws states and localities from imposing any “qualification or prerequisite to voting or standard, practice, or procedure…in a manner which results in a denial or abridgment of the right of any citizen of the United States to vote on account of race or color.”

One of the policies that the DNC claimed was a violation of Section 2 was a new requirement to discard out-of-precinct ballots, even for statewide elections like for the governor or the president. The second policy, known as HB 2023, is a criminal statute making it illegal for anyone but a voter’s family member or caregiver to return early ballots for another person.

Meanwhile, a lower court ruled in favor of the DNC and upheld that both policies violated Section 2 because they discriminated against Native American, Latino, and Black voters. The court also held that the ballot collection ban policy was passed by Arizona’s state legislature for intentionally discriminatory purposes, which violated not only the Voting Rights Act but also the Fifteenth Amendment to the U.S. Constitution.

So what did Arizona do? They went to the Supreme Court.

On July 1, 2021, the Supreme Court reversed the lower court’s rulings and upheld both of Arizona’s policies in a 6-3 vote. And, how did they rule? Now, say it with me: “along party lines!” Noticing a pattern?

While ruling on this case, the Supreme Court focused on factors that have never even been considered before in similar voting rights cases. For instance, one question judges asked while determining their ruling was whether Arizona provided more opportunities to vote now than when Section 2 was last amended in 1982.

There should be more voting opportunities for minority voters now than in 1982, and that question shouldn’t be a factor in ruling whether a law in 2021 abridges the Voting Rights Act or not. This line of thinking is going to make it much harder for voting rights advocates to bring Section 2 lawsuits against states and localities that intentionally discriminate against minority voters. And that’s precisely the point.

The United States v. Texas case will likely be added to this list of landmark Supreme Court voting rights cases. Will it have the same end result as Abbott v. Perez? Only time will tell. But one thing we do know is that we cannot depend on the courts to save us.

Our voting rights are under attack. Our democracy is in peril. And the time to act is now. Hope is not lost. With a people-powered campaign, we can protect and strengthen our democracy.