Last week, I wrote about how Ohio’s proposed district maps received an “F” from our Redistricting Report Card with the Princeton Gerrymandering Project, due to extreme partisan gerrymandering. Well, yet another state has failed: Texas.

Before we dive in, I want to be crystal clear that gerrymandering is an undemocratic tool that both major political parties have used for their own partisan benefit. It just so happens that Republicans run the Texas state government, so this particular story focuses on their proposed maps to lock themselves into power. However, you can be sure that we'll use this space as more states introduce maps to let you know when Democrats gerrymander––as we did in New York–– too. This isn’t about partisanship. This is about saving our democracy.

Like Ohio, the Texas state legislature has notoriously gerrymandered their maps for years. However, Texas doesn’t just engage in partisan gerrymandering, they also use racial gerrymandering–an illegal practice–to intentionally suppress minority voters throughout the state. In fact, Texas violated the Voting Rights Act of 1965 due to intentional racial discrimination every single decade since its enactment.

Before we break down Texas’ proposed congressional maps, let’s talk about racial gerrymandering.

Let me give you an example. In the southern United States, white Democrats tend to live close to white Republican voting blocs and are a smaller part of the electorate than communities of color. Essentially, they don’t hold enough political influence for partisan gerrymandering to move the needle either way. That said, communities of color tend to live in smaller, denser areas due to residential segregation. So, what does the GOP do? They use “packing” and “cracking” to either group all minority voters into one district or spread them across many districts to dilute their political power.

In 2011, a group of Black and Hispanic voters challenged Texas’ proposed state maps for racial gerrymandering. From 2000 to 2010, Texas grew by 4 million people, 90 percent of whom were minorities. Even so, not a single minority group received an additional seat in Congress as a result of population growth. With ever-so-slight alterations, Texas was able to keep its racially oppressive map, despite the lawsuit and outcry from voting rights advocates throughout the country.

The 2020 census found that Dallas experienced remarkable population growth powered mainly by Black and Latino voters, giving Texas two more congressional seats. In spite of this fact, the state legislature has opted to place their two new districts in a whiter area of Austin and a historically Republican area of Houston. Neither new seat is a minority opportunity district where voters of color could successfully elect their candidate of choice.

With the remaining districts, the Texas GOP either packed minority voters into seats already controlled by Democrats or cracked minority voting blocs into white, conservative strongholds. This racial gerrymandering stunts the ability of minority voters, especially Latino voters, to have political influence in multiple congressional districts.

Domingo Garcia, the national president of the League of United Latin American Citizens, said it best, “Ninety-five percent of the growth for Texas is Hispanic, but there’s no additional Hispanic districts in this proposal.” LULAC’s preliminary evaluation of the proposed Texas maps also found that out of the 38 new congressional districts, Latino voters would only have the opportunity to elect their candidate of choice in seven of them, down from the eight Latino opportunity districts currently in place for Texas’ 36 congressional districts. Frankly, Texas’ proposed maps are a blatant GOP power-grab in an attempt to maintain their majority in an evolving political and racial landscape. 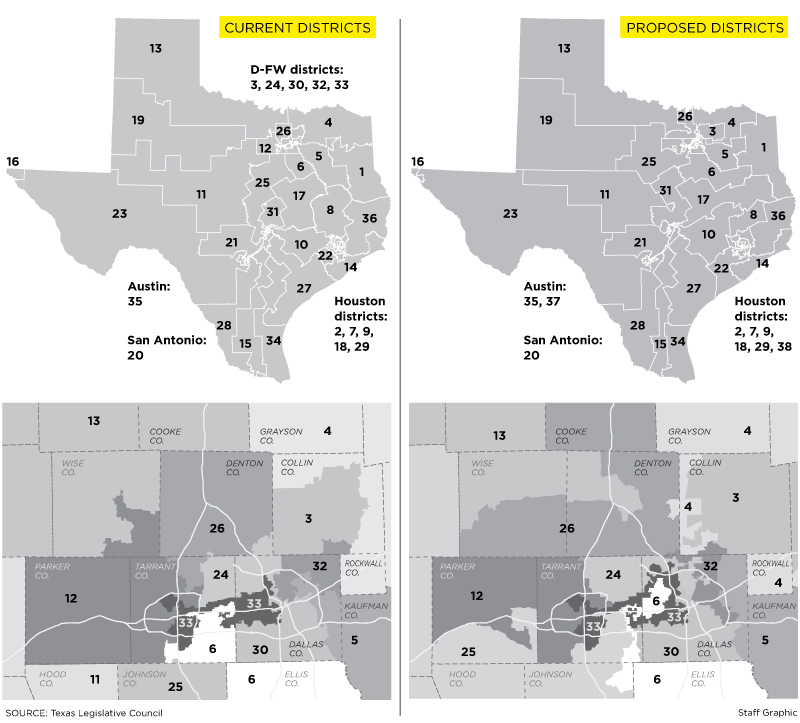 So, let’s get into our Redistricting Report Card for Texas.

Unsurprisingly, we gave Texas’ proposed maps a big, fat “F” for their blatant use of partisan gerrymandering to advantage Republicans and oppress minority voters. Like Ohio, Texas’ proposed map falls far below the fair range for partisan fairness when compared to over a million simulated Texas congressional maps that do achieve fairness metrics.

We have to fight back.

Look, these maps will be challenged in court if they proceed. And, you know what? They might even get struck down. But if history tells us anything, it’s that politicians know how to work around a legal challenge to continue gerrymandering. Simply put, we cannot rely on the courts to create and enforce fair maps. We’ve tried that in the past, and it didn’t work. That’s why we need Congress to act now before it’s too late.

Remember: the fight isn’t over yet – and we’ve only just begun updating our Redistricting Report Card for states across the nation. We are committed to increasing transparency throughout the redistricting process for voters and advocates like you.

Be sure to check out our partnership with Princeton to see how we graded proposed maps in your state.