Each decade, the U.S. Census collects data on the American population to gain an accurate picture of the ever-changing demographics of the country. The census also marks the occasion of redistricting, in which all 50 states redraw the congressional districts that define where Americans vote and how their votes are counted.

In theory, redistricting is an opportunity for states to draw voting maps that best serve the interests of their voters. In practice, however, politicians of both parties use the process to ensure reelection by gerrymandering their districts. Effectively, gerrymandering allows partisans to choose their own voters, rather than voters choosing their representative. As a result, American voters are left with few choices and a diminished voice.

Gerrymandering, a process that disenfranchises voters

Here at RepresentUs, we’ve been documenting the threat that gerrymandering poses to American democracy for quite some time. While gerrymandering has been around for decades, the practice has escalated in recent cycles and increasingly impacts congressional elections.

Effectively, gerrymandering is when election district lines are drawn in a way that artificially advantages one person, party, or group over another – and it's a big reason why our elections aren't fair and competitive. There are various ways of achieving this, including “cracking” - breaking up similar voting groups into different districts to dilute the power of their vote - and “packing,” - crowding similar voting groups into one or two districts to diminish their overall representation and power in government.

An example of how politicians can gerrymander elections to their advantage: 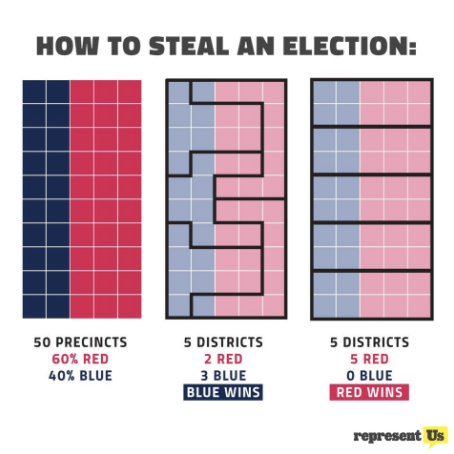 By utilizing these tactics, politicians in both parties have, through technically legal means, rigged elections to their liking, protecting incumbents from challengers and decreasing the competitiveness of districts. While gerrymandering might be good for political parties, it is all to the detriment of American voters.

Where do we stand after 2020 redistricting?

The 2020 redistricting process has given the American people a peculiar result. Even as the 2010 Republican advantage in the House has tilted more towards Democrats, reflecting the national political reality more accurately, there are very few competitive seats. After the 2010 redistricting cycle, the Democratic party learned from their electoral losses and committed to more aggressive gerrymandering tactics, much like their Republican counterparts.

Yet even as they have succeeded at correcting the overall imbalance of the House, American voters are left with significantly less choice in who represents them in Congress. As the New York Times writes in their of the new Congressional map, 216-219 of the 435 districts tilt towards Democrats, with an identical number tilting Republican.

“The surprisingly fair map defies the expectations of many analysts, who had believed that the Republicans would use the redistricting process to build an overwhelming structural advantage in the House, as they did a decade ago.”

This fairness has come at a price, however. With both parties aggressively gerrymandering to maximize their electoral advantage in states they control, the American voters are the ones who suffer. In fact, according to 2020 election results, less than 40 out of the 435 districts are expected to be competitive in the 2022 election. A decade ago, there were 73 such districts. For context, competitive seats are usually defined as “races won by less than 55% of the vote.”

This development has severe repercussions. Incumbents will continue to dominate in elections, meaning that voters will have little chance at replacing politicians who do not truly represent their interest. According to analysis from Ballotpedia, 93% of incumbents nationwide won their elections in 2020. Many of these races will effectively be decided in partisan primaries – before the general election even takes place – disenfranchising millions of American voters in states around the country. This leaves politicians largely unaccountable to the voters they are meant to represent.

Finally, when primaries are the only elections that matter, candidates are incentivized to cater to a small sliver of the electorate: primary voters. As a result, more candidates on the extreme ends of the political spectrum will win their primary, then win the general with no competition and ultimately be sent to Congress, leading to more divisiveness and gridlock.

So where do we go from here?

Gerrymandering might be worse than ever, but there are ways to combat it. RepresentUs has long advocated for and passed anti-gerrymandering measures, from banning gerrymandering altogether to convincing states to adopt independent redistricting commissions to draw maps. In the 2021 redistricting cycle, we worked with partners in the key states of Wisconsin, Maryland, Pennsylvania, Florida, and North Carolina to successfully secure fairer maps.

The ultimate result of the 2021 cycle is a mixed bag: We have a national map that is more balanced between the parties, but voters are presented with significantly less competitive districts, and therefore significantly less power. RepresentUs and our movement will build on the progress we’ve made and continue to fight partisan gerrymandering. By building on our more-than-150 pro-democracy victories, we can increase competitive districts nationwide as well, providing American voters with the choices they deserve.

A daily news digest delivered to your inbox with the latest on democracy reform, anti-corruption, and the fight to unrig our system across the country. Sign up now to stay informed.
We take your privacy seriously. You will receive periodic updates from RepresentUs and you can unsubscribe from our emails at any time. Learn more about RepresentUs and the American Anti-Corruption Act.