Wisconsin Republicans have proposed a gerrymandered congressional map, according to the Redistricting Report Card from RepresentUs and the Princeton Gerrymandering Project. Released yesterday, the map got an “F” for partisan fairness because it gives Republicans a significant advantage, an “F” in competitiveness with only one competitive district, and a “C” for geographic features, which is considered average. If passed by the Republican legislature, the map is predicted to produce a delegation of six Republicans and two Democrats. 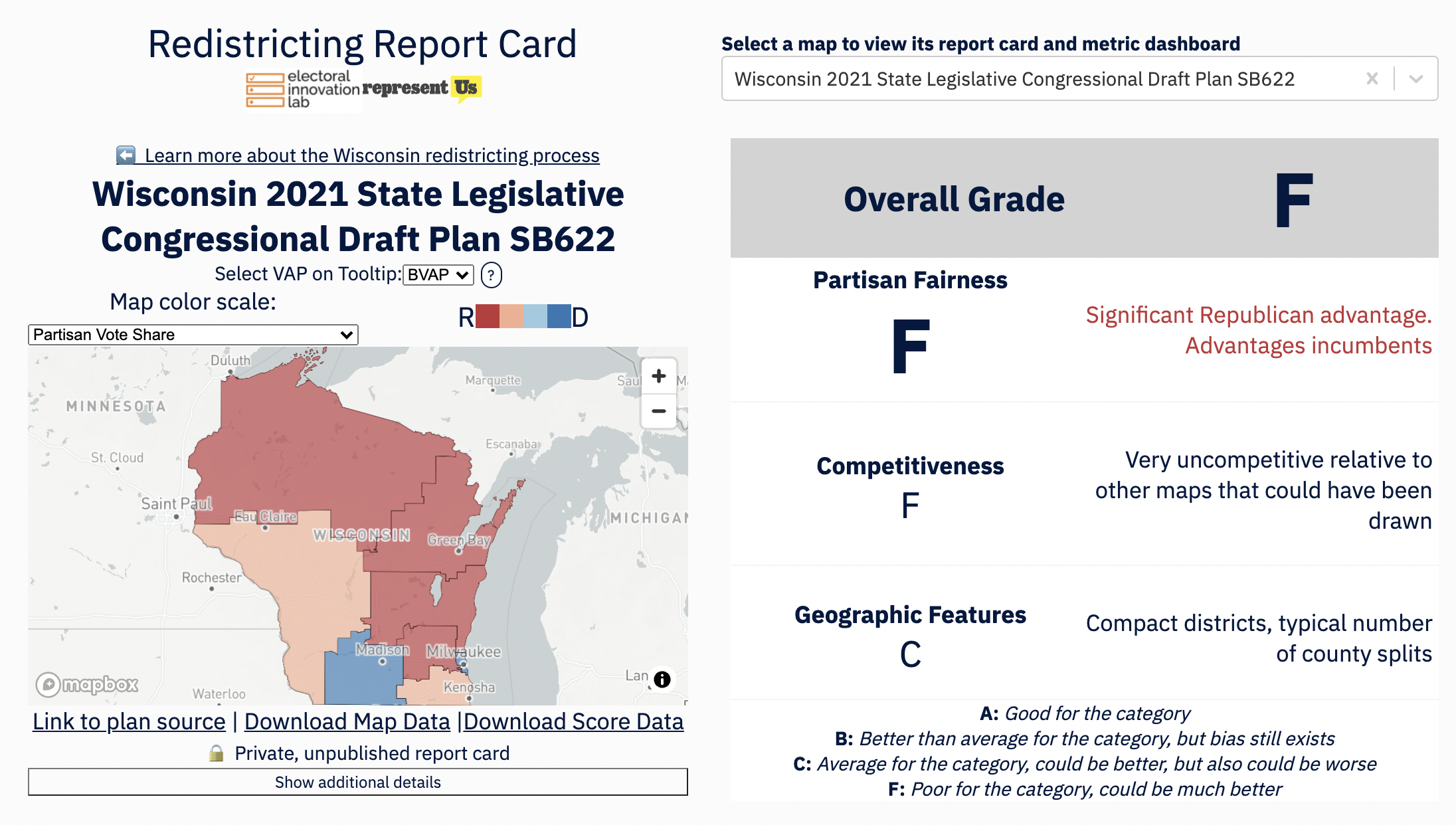 Before the redistricting process kicked off, RepresentUs’ Gerrymandering Threat Index categorized Wisconsin as being at “extreme” risk of partisan gerrymandering. That’s primarily because state politicians have complete control over the map drawing process. Transparency is also a major concern, as Wisconsin has no requirements for public hearings, data, or submissions. Gov. Tony Evers did create a nonpartisan Advisory Commission that holds public hearings, but Republican leadership in the legislature has said they’ll ignore the commission. If the legislature and governor can’t agree on a map, the court would have to step in to draw the maps.

“When partisan lawmakers are in charge of the redistricting process, it’s almost guaranteed you’ll end up with partisan gerrymandering. These maps proposed by Wisconsin Republicans continue a pattern we’re seeing in red and blue states across the country,” said RepresentUs Senior Campaign Director Joe Kabourek. “By overwhelming margins, Wisconsin voters oppose gerrymandering and they want fair districts that don’t favor one party over the other. Legislators should listen to their constituents and go back to the drawing board.”

The Redistricting Report Card utilizes a unique algorithm that generates 1 million districting plans for each state. The tool compares proposed maps against the full range of possibilities -- both good and bad -- and issues grades based on criteria including partisan fairness, competitiveness, and geographic features. A grade of “C” is considered average.

The Report Card has also given out failing “F” grades to proposed or approved congressional maps in Illinois, North Carolina, Oregon and Texas.

The Freedom to Vote Act, a landmark federal bill currently being considered by the U.S. Senate, would ban partisan gerrymandering at the congressional level. If passed, the law would likely set up immediate court battles over unfair voting maps approved this cycle.