Amanda Pustz is the state director of Protect Wisconsin Elections, a volunteer-led, grassroots movement made up of voters across the political spectrum. Headquartered in Madison, PWE activates Wisconsinites across political ideologies to build public awareness about Wisconsin’s highly effective election process, and advocate for election officials – who are under threat from extremist election deniers.

When she’s not protecting democracy, you can find Amanda enjoying waterfront walks on the University of Wisconsin campus, listening to live music, or indulging in historical fiction. A lifelong public servant, Amanda got her professional start as a high school history teacher, educating students about American democracy. Now, the campaign trail is her classroom, and as you’ll see in this interview, her passion for engaging and informing the public about democracy hasn’t ceased.

Excerpts of our conversation have been edited for clarity.

Juliette Lockman: Tell us a little bit about yourself, Amanda. How long have you lived in the Badger State? Where do you live now?

Amanda Pustz: I've lived in Wisconsin since 1997. I don't say this very much to Wisconsinites, but I grew up in Illinois and went to college in Michigan. I chose to come to Wisconsin after I graduated from college. At the time I was looking for a teaching job. And so I wanted a state that had a good reputation in terms of their K-12 system. I'm in Madison, the capital city in south central Wisconsin. It's laid back Midwest culture.

JL: What can you tell us about Protect Wisconsin Elections?

AP: It is a campaign that's founded by a lot of grassroots volunteers, along with myself and the other organizers in Wisconsin to work on protecting Wisconsin's elections. What does that mean? It means that first and foremost, we want to protect the fine people who administer elections here in the state of Wisconsin. It's one of the best in the country in terms of how elections are run. For example, MIT's election performance index rated it at number four out of the entire country.

There's 1,852 municipal clerks, and they are all committed to running well-organized, fair and free elections. And then, of course, all of the poll workers and poll observers that come out to volunteer their time to make sure that elections are run well, and that people have the opportunity to vote for the leaders of their choosing. They're our neighbors, our friends, our community members. These are trustworthy people who are committed to democracy. They may vote one way or the other in an election, but they want to make sure that everybody, no matter their partisan affiliation or not, has an opportunity. And so when I hear that people are either threatening these workers that are running the election or threatening to dismantle the system as we know it – that is scary.

I think about my former life when I was a high school history teacher. I would encourage our 16 year olds or 17 year olds to go and sign up to be poll workers thinking that this is their first step into the democratic process. They learn about the system. They get excited about being a voter when they turn 18. And to then think that I might have sent these kids into a situation where they're getting criticism or threats or confrontation, when all they're trying to do is help people vote. That's not acceptable. We have to do something.

JL: What does a day in the life of Amanda look like on the campaign trail?

AP: As the state director, a lot of it is organizing. Our campaign is structured in two basic ways with these election protection teams. The first piece is our volunteers in their Wisconsin communities coming together to protect their municipal clerks. The second piece is educating the rest of Wisconsin. I think a lot of people are not aware of what is going on. They just assume, “Everything's good, everything's great. I don't have to worry.” They don't know. And so [we’re] helping inform them of what's going on and then helping them join our efforts together to educate others. Let's thank [our clerks] personally and face to face. But then let's also give them real support by educating the public. For example, if we find out that a certain municipality needs poll workers, let's recruit our friends and neighbors and community members in that area to be poll workers for the August primary or the November election. Things like that. 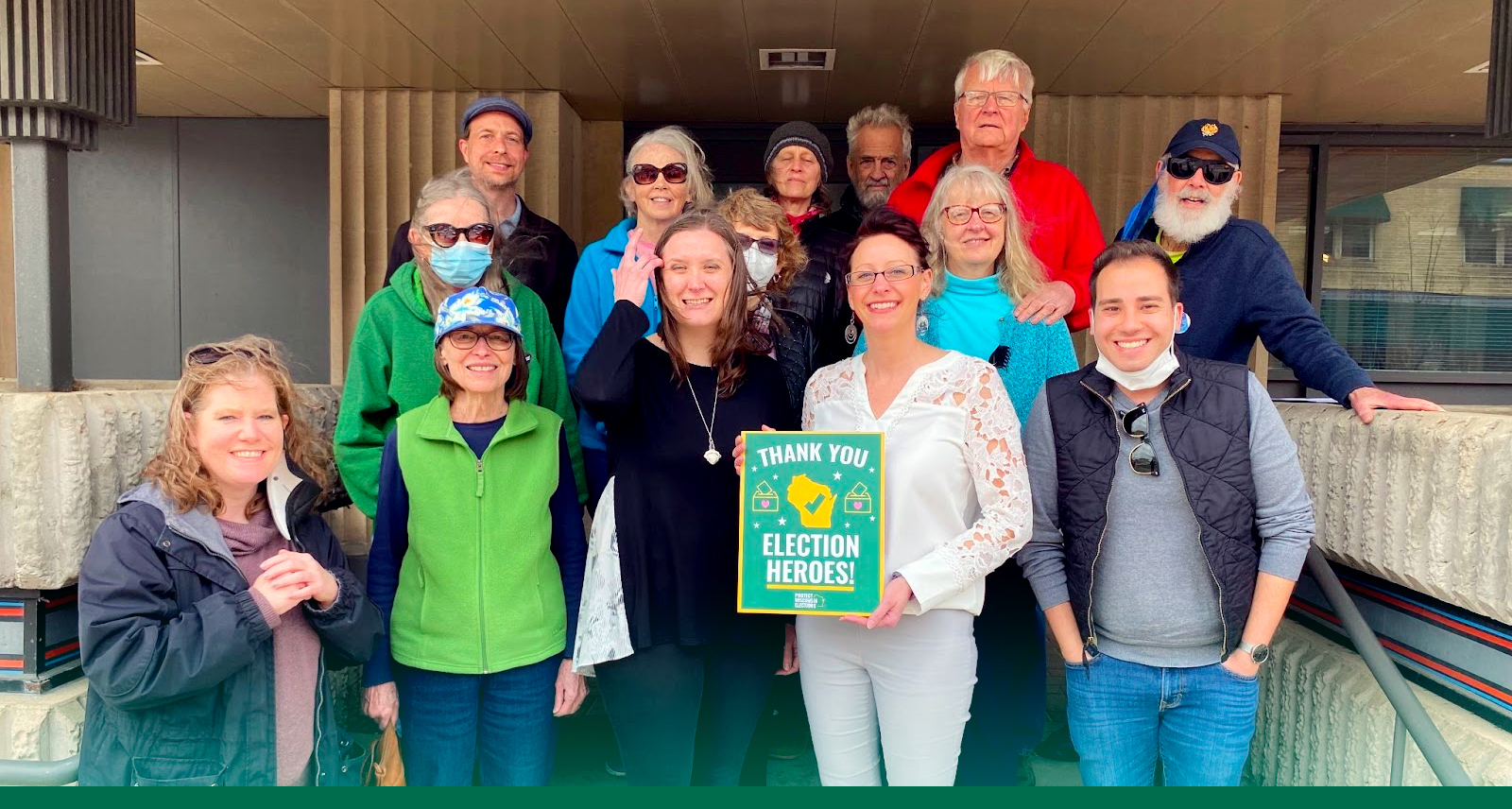 AP: We had a Clerk Appreciation Day a month ago and one clerk told us she had just run her 69th election and she was like, “I've never been thanked before.” That's amazing to me. I'm thinking, “You're the backbone of our democracy. You are making sure people have the right to elect the leaders of their choosing. And no one has thanked you?!” That was so heartwarming. I loved that. Or the fact that even just last night we had a letter to the editor training. I mean, people didn't just come up with one idea for letters to the editor. They came up with like three or four that were brilliant. And to me, that's what feeds a campaign. They're the ones who keep people like me going.

I think that part of what they're being drawn to with Protect Wisconsin Elections is the fact that it's positive. I feel like a lot of people are seeing politics right now as being negative with a lot of vitriol, with a lot of negativity. We're doing the exact opposite. You're trying to present a positive and send out positive waves into the world rather than feeding on the negative. And so much of what we're trying to do is bring people together. I think people are really itching for that.

JL: Given the extreme partisanship that we're seeing in today's political climate, a lot of people are disillusioned with politics and they want to tune it out completely. What would your pitch be to conservatives, liberals, and everyone in between who feel this way?

AP: I like to present the question of what happens if you continue with doing nothing. What if people did nothing? Or what if people got involved and did something? And depending on the type of person I'm talking to, that resonates with some people.

I also question people, “why would they want us to check out of the system?” Because I think that is a tactic. You can take power. There is a tactic to exhaust people so that they don't want to get involved. And for some people, to [point out] this idea that you're actually being manipulated by the bombardment of bad partisanship, bad stories, hyper partisanship – that works.

For others, it might be a situation like connecting an issue that does matter to them. What does it matter? What does it matter to vote? And then we would talk about what's an issue that matters to them. And they say, “I got nothing.” And I'm like, Really? You want to go to that concert next week? How about ticket prices or public transportation to get there or if there is something about the roads that you're going to ride to get to that concert. There's something that is going to be connected to politics that's going to connect with an issue that matters even to people that think they're not political.

Sometimes people need that inspirational story, too. They need to remember that changes have happened. There have been successful movements.

Victories can happen, change can happen. It is often long, it is hard fought, but it is worth it in the end. Also, recognizing that cases like the 19th Amendment, was an incomplete victory because it wasn't really a victory until the Voting Rights Act of 1965. So acknowledging the whole thing, I think, is important to sometimes motivate people to understand why it's important to get involved. Yeah, it's challenging. Not going to lie. It's going to be long. But it's worth it to make the changes. 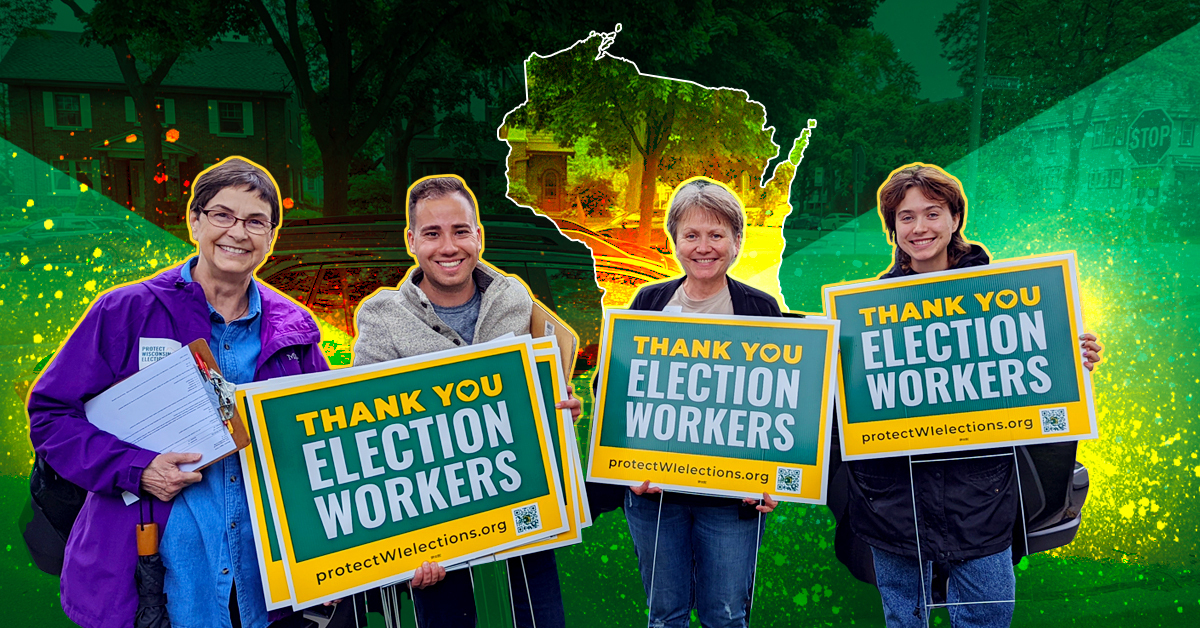 JL: I want to give you a chance to plug any exciting events that are coming up with Protect Wisconsin Elections.

AP: We're super excited by the things that we've done with Protect Wisconsin Elections so far, but we've got lots more work ahead of us. We're looking at starting to attend some community events where we can do some of those public education outreaches, where we can start to have conversations with everyday, ordinary Wisconsinites about the importance of protecting Wisconsin election officials.

We also have yard signs that we are going to get made and hopefully blanket Wisconsin with these really awesome signs thanking our election workers. I want to see nothing but yellow and green in all sorts of different places across the state where we are reminded every day [about the] people that are the backbone of our democracy.

I would also encourage people to go to the website, Protect Wisconsin Elections. Sign up! We'll get you hooked into your local team so you can join us in these efforts.

A daily news digest delivered to your inbox with the latest on democracy reform, anti-corruption, and the flight to unrig our system across the country.

Sign up now to stay informed.
We take your privacy seriously. You will receive periodic updates from RepresentUs and you can unsubscribe from our emails at any time. Learn more about RepresentUs and the American Anti-Corruption Act.
RepresentUs is America’s leading anti-corruption organization working city-by-city, state-by-state to fix our broken political system.