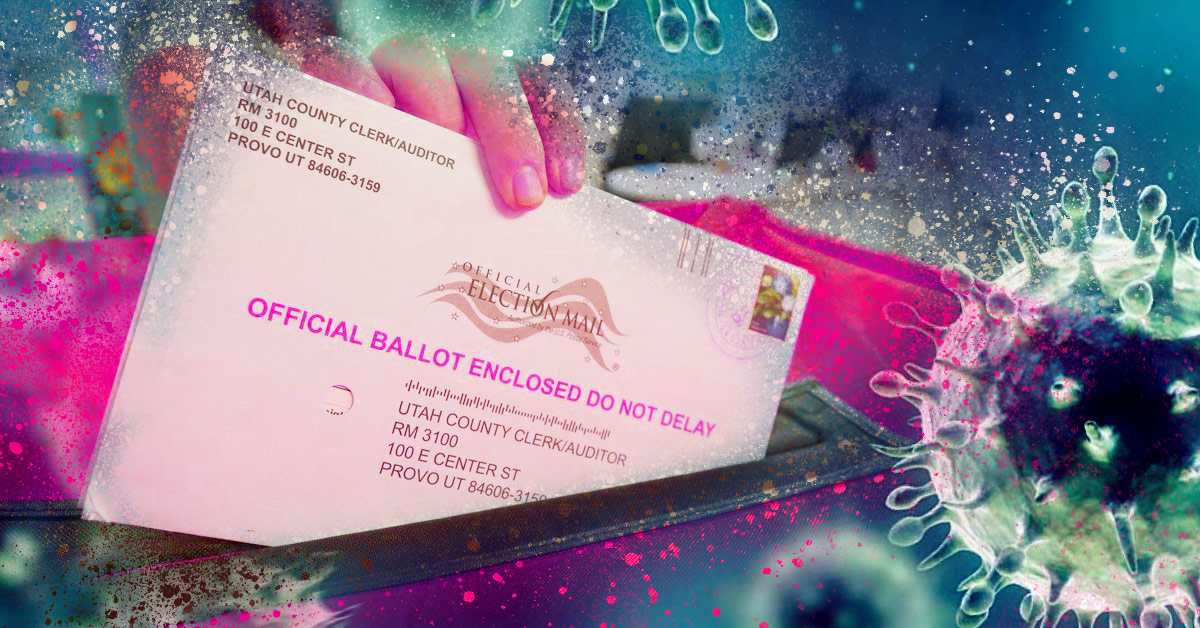 A public health emergency is reminding Americans how useful it is to be able to vote at home.

The ongoing Coronavirus (COVID-19) pandemic is upending American life as we know it. From shopping and socializing to daycare and dining out, our daily lives have screeched to a halt. But one thing hasn't changed: 2020 is a pivotal election year.

Even while events are being canceled and entire cities are going on lockdown, many Americans who want to vote are being asked to risk their health and safety in crowded polling places.

But it doesn't have to be that way if your state offers you the option to vote at home. Find out how voting from home works, where it’s already happening, and what you can do to support our nation and our elections during this public health crisis.

Wait, you can vote at home?

Yes - many Americans can vote from home! Vote at home, also known as vote by mail, or absentee voting, is an increasingly popular voting method that's an alternative to going in person to a polling place on Election Day.

Here's how it works:

Vote at home gives voters the option to vote securely, on their own schedules – without the stress of finding childcare, taking time off work… or worrying about a global pandemic.

Who can (and can't) vote from home right now? 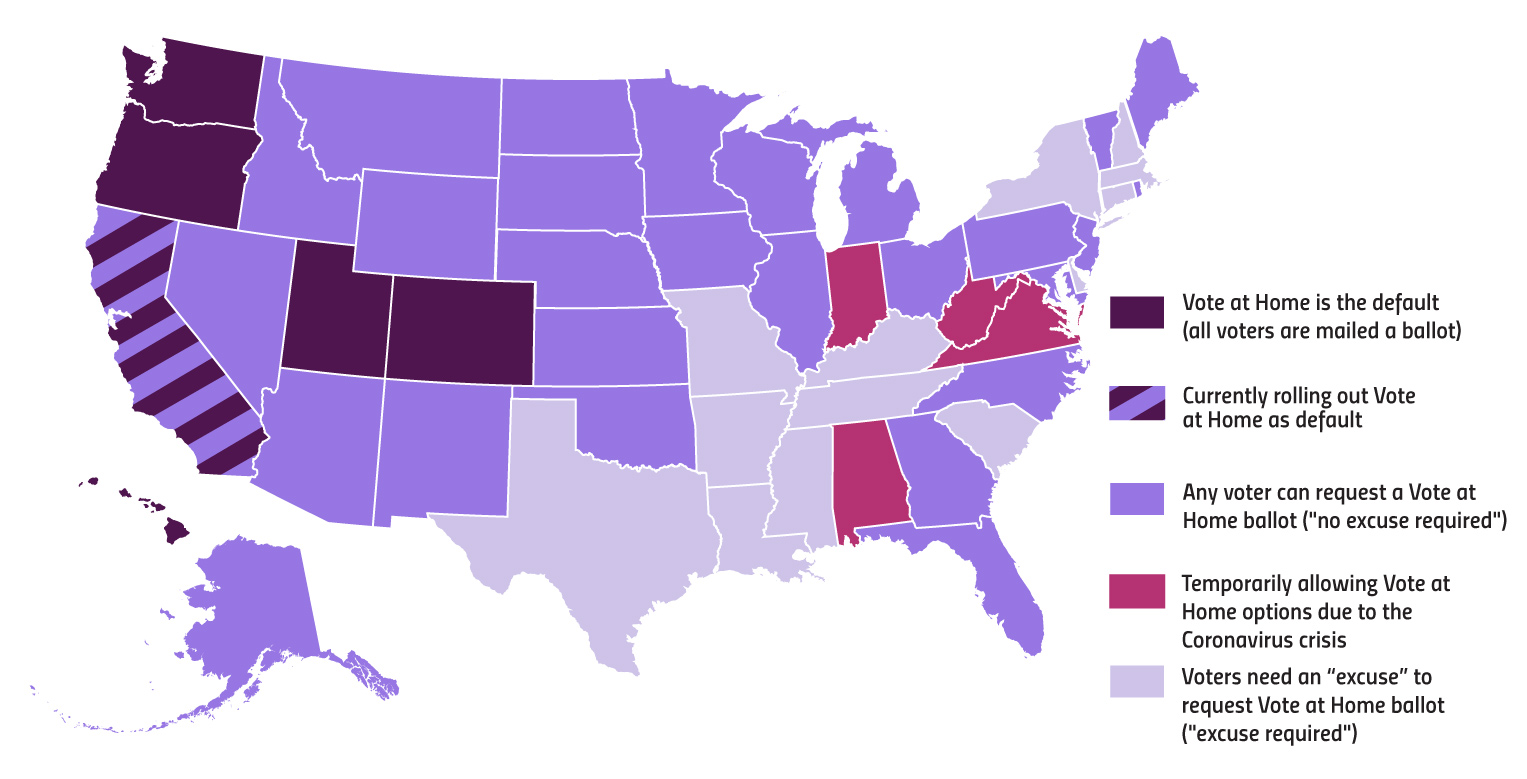 Vote at home is available in every state – but not all Americans have access to it. There are three different ways states currently offer vote at home:

Want to know where your state stands? Find out if you can vote from home this election season.

Will Americans be able to vote from home during the coronavirus pandemic?

Not yet – but there are initiatives underway right now that could change that.

Lawmakers at the state and federal level are working quickly to respond to this crisis and protect your health and your right to vote. News is moving fast, and some recent changes in legislation and elections may not yet be reflected here.

While many Americans already have the option to vote from home, voters in 10 states do not. Senators Amy Klobuchar and Ron Wyden introduced legislation on March 18 that would ensure all states allow voters to request absentee ballots and protect our health when a public health emergency, such as COVID-19, would make voting in person unsafe.

Whether you live in a state that already offers vote-at-home options, or you yourself would be unable to vote safely under the current circumstances, you can support yourself and your fellow Americans by signing our petition to urge your Senator to pass the bill.

The states also have the power to make Vote at Home accessible to all Americans, by changing their policy or making Coronavirus a qualified excuse during this election.

Virginia and West Virginia have already responded to the crisis by allowing all voters to request a mailed ballot—and it’s crucial the other states that require an excuse to vote absentee follow their lead.

Why is voting at home important?

Even before the pandemic turned our world upside down, the movement to expand vote from home was on the rise, with more states and counties adopting it. Voting from home gives Americans the option to vote securely and conveniently without worrying about taking time off of work to stand in long lines at crowded polling places.

Voting from home is especially useful for Americans who may have trouble accessing a polling place, such as seniors, people who can't take time off work, disabled voters, or even those who live in more rural areas and must travel long distances to reach a polling place. Because voting at home brings the ballot to your door, the benefits to voters of all kinds are immense.

Imagine a mom who needs to take care of her sick son on Election Day and can’t get to the polls, a stay-at-home dad who can’t find childcare for that time, or a voter in a state where there's often ice on the roads in early November. First responders whose schedules can be disrupted, and of course overseas military men and women can all face challenges casting their ballots when their only option is in-person voting.

How does voting at home fix our broken elections?

Our elected officials should represent the American people, and voting is one of the most important ways we make our voices heard. If voting isn’t secure and accessible to all eligible voters, we cannot have a government that is truly of, by, and for the people. That’s why voting from home is a key tool to help unrig the system.

Giving voters the opportunity to vote from home consistently boosts voter turnout, making our government better represent the will of the people.

In the 2018 primaries, universal vote at home states saw an impressive 15.5% higher turnout than those using traditional polling places. You can even see this trend from county to county.

In a Utah town split between one county that uses vote at home and one that doesn’t, one study, after controlling for voter propensity, found turnout jumped by up to 12.5% in the portion of the town using vote at home. This trend seems to be especially true for important but often overlooked local elections.

Voting by mail is a secure, cost-saving option.

Paper ballots give a full audit trail and can’t be electronically hacked, making our elections more secure. And without the need to staff as many polling places and maintain and replace hundreds of voting machines, cities and states can save a lot of money.

In every election, it’s integral that everybody has the chance to participate — whether we’re facing a pandemic or just juggling childcare.

The movement to allow more voters to vote from home has been gaining traction in recent years. You can help capitalize on this momentum and bring this needed reform to Americans across America by joining RepresentUs, or becoming a part of our national online volunteer team the Action Brigade.