So you live in an oligarchy.

A word usually associated with deranged Russian oil tycoons is suddenly front and center in many American’s minds thanks to a new study by researchers at Princeton and Northwestern. The analysis of 1,779 recent policy outcomes found that “economic elites and organized groups representing business interests have substantial independent impacts on U.S. government policy,” while average citizens “have little or no independent influence.”

In other words, the U.S. is an oligarchy: a system of government where a small number of elites rule. Everyone else? Not so much.

“Well I could have told you that”

This might seem obvious to some readers. After all, everyone knows economic elites run the show in the United States, right?

As it turns out, there are surprisingly few studies out there on this topic. That’s what makes this study so important. If we want to have an informed debate about issues of money and influence, those things “everyone knows” have to be backed up with real data. Let’s look behind the headline to see what the research really says.

The research was done by two political scientists, Martin Gilens and Benjamin Page, and had two parts: First, they measured the amount of political influence various groups have in America. Then, they checked this against some technical definitions of democracy, oligarchy, and other forms of government.

Finding 1: The Wealthy Have More Influence 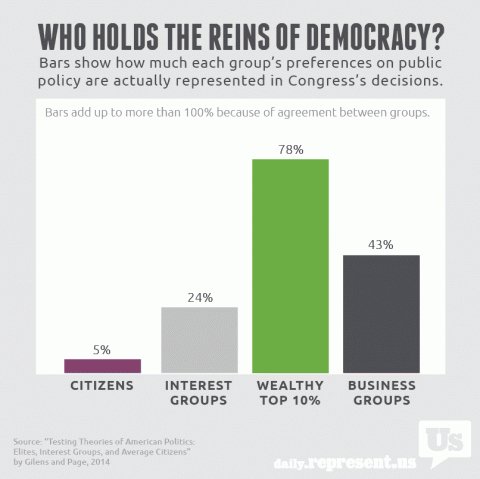 The chart here shows how much political influence different groups have in America today. Not only do the wealthy have the most influence; ordinary voters have basically none.

To have “political influence” in this case means that Congress responds to you by passing the laws and policies you like. Low influence means you’re ignored — Congress passes laws that have no relationship to what you want.

Special interest groups also have sway over public policy. The researchers divided them into two types. “Mass” interest groups, which represent large groups of organized citizens, have a small amount of power. Business groups, like trade associations, have a moderate amount, likely because they can afford to spend more on lobbying and political donations.

None of this means that ordinary people never get what they want from Congress. In several instance, public opinion data matched up with things Congress actually did, but the vast majority were also outcomes favored by the wealthy and business interests. What about those other times? The sad fact is that, statistically speaking, the government doesn’t care what 90% of Americans think.

Okay, so that’s bad: the wealthy get the laws they want. The final piece of the puzzle is to look at the pattern of influence we have, and see what category that fits into. 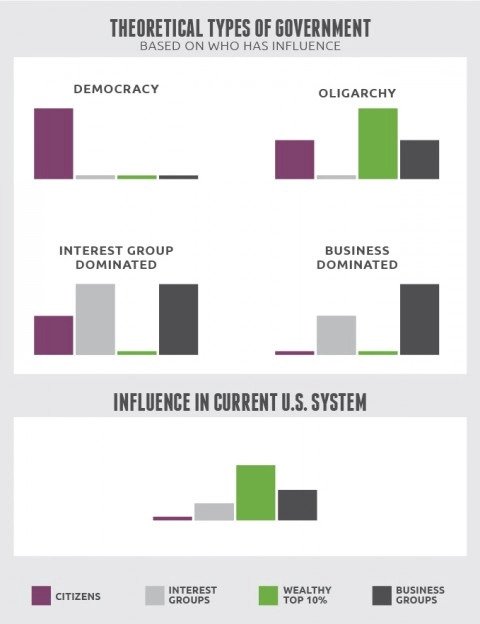 The authors defined four possible systems we might have: (1) democracy, (2) oligarchy, or semi-democratic systems dominated by (3) interest groups generally or (4) business groups especially.

You can look at the figure and judge for yourself: America in 2014 matches mostly with the oligarchy model — an oligarchy of wealthy individuals.

The problem here isn’t the existence of wealth, or that wealthy Americans have political opinions. It’s that the government is representing only 10% of the American people. Everyone else is living with something less than democracy.

The causes and the solution

This research wasn’t really about what got us to an oligarchy, but the authors have some ideas:

"It is well established that organized groups regularly lobby and fraternize with public officials; move through revolving doors between public and private employment; provide self-serving information to officials; draft legislation; and spend a great deal of money on election campaigns.

At its heart, this is a problem of corruption – caused by money in our political system. Such corruption is fundamentally opposed to the ideals of our republic because “the public is likely to be a more certain guardian of its own interests than any feasible alternative.”

Martin Gilens has some hope for change however. In a recent interview, he said, “meaningful campaign finance reform is the single, most promising avenue” for change.

Other solutions can be found in certain democratic political reforms including ranked choice voting and open primaries that serve to break the two-party duopoly's stranglehold on our political system and give voters more choice and voice at the ballot box.

Some Details: How They Calculated Influence

To find how much influence the general public has, Gilens and Page looked at polling data about specific policies, and then compared that to what Congress actually did. These line graphs show that comparison: how likely a law was to pass versus how much the public wanted it.

The flat line for most Americans shows that no matter how popular a law was, Congress was about equally likely to pass it. Contrast that with the line for wealthy Americans, whose opinions substantially affect how likely a bill is to pass.

You can read a pre-release version of Gilens and Page’s research paper here.