We need to show Rep. AOC and Sen. Ted Cruz we’re watching, we’ve got their backs, and we want them to follow through on their promise to close the revolving door.

Senator Ted Cruz (R-TX) and Rep. Alexandria Ocasio-Cortez (D-NY) promised to work together to ban members of Congress from becoming lobbyists. They sound serious. But Congress is where good ideas go to die, so right now, building public pressure is the most important thing we can do. 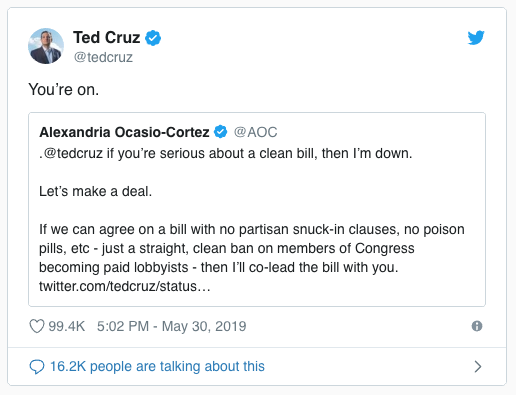 The Cruz/AOC plan would ban former members of Congress from becoming lobbyists… for life. But even a 5 or 10-year ban would be huge progress. They’d slam the “revolving door” shut and prevent big-money special interests from bribing politicians with million-dollar lobbying jobs. Cruz and AOC have publicly agreed to a “clean” bill—one that isn't stuffed with poison pills or partisan giveaways—and we need to make sure they see it through.

Remember, President Trump promised to “Drain the Swamp”—and it’s flooding instead. If AOC and Cruz put together a clean, bipartisan bill, it has a real chance of passing.

Send a message to AOC and Ted Cruz: We support your effort to close the revolving door. Work together and pass a clean bill the President can sign.

Thank you for your leadership in working across the aisle on your proposed ban on former members of Congress becoming lobbyists. You’re following in the footsteps of conservatives and progressives working together to pass Anti-Corruption reforms in states across America. The people are watching. We’ve got your back, and we won’t let you off the hook until this gets done.