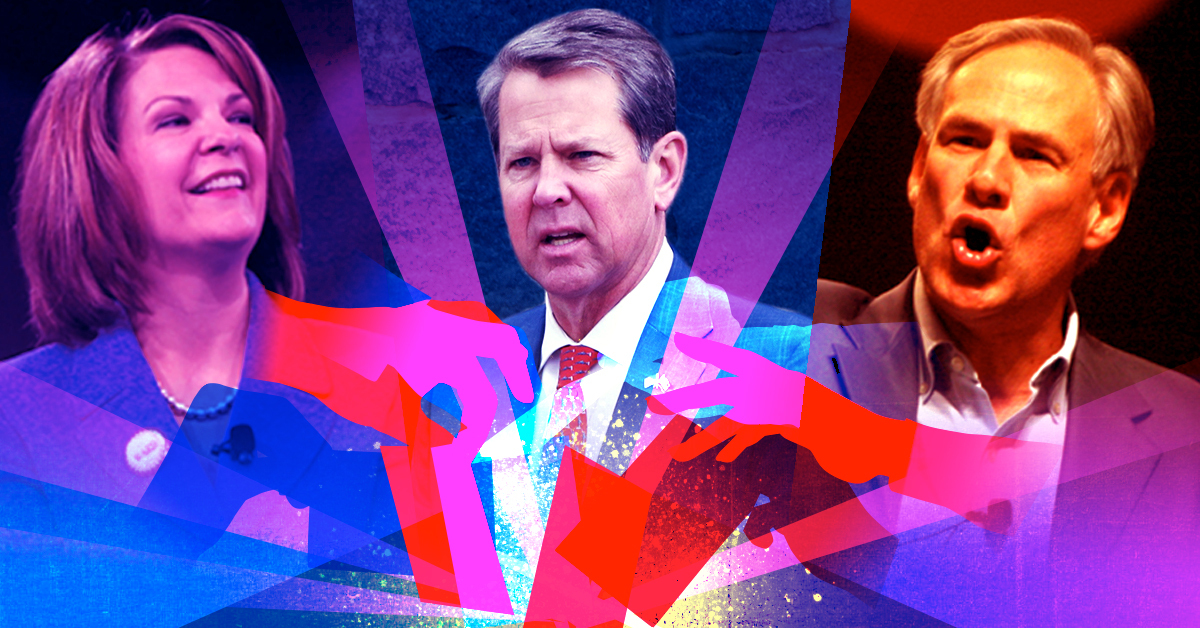 A new report from Voting Rights Lab, a nonpartisan organization dedicated to advocating for the right to vote, exposes a dangerous trend developing across the country. In the aftermath of the 2020 election, more than 180 bills aimed at “shifting election authority” have been introduced across the country.

As the 3rd US Circuit Court of Appeals stated in November 2020 as it rejected an effort by former President Trump to challenge the results of the presidential election, “free, fair elections are the lifeblood of our democracy.”

However, the report from Voting Rights Lab contains alarming evidence that American elections are under attack. Voting Rights Lab has tracked seventeen states that have introduced bills that provide partisan actors more oversight over how elections are conducted. In these states, politicians are attempting to, and in some cases already have, grab control of the elections from the nonpartisan officials who usually oversee them.

As the report states, “These actions – legislative and otherwise – threaten to inject partisanship where it never belongs: into our election systems themselves.”

The report states three dangerous results of this recent wave of legislation:

All together, these laws pose a serious threat to American democracy.

Arizona is a newly purple state that has become a key battleground for future elections. President Biden won Arizona by a little more than 10,000 votes and the state has two Democratic senators, while the governor is a Republican, and the U.S. House delegation is almost dead even, with five Democrats and four Republicans. Yet in the aftermath of the 2020 election, the Republican-led state legislature has taken numerous steps to alter how its elections are held, many of them partisan and controversial.

The state legislature has introduced several bills that aim to remove power from state and local officials, and instead place it in the hands of the legislature, a significant departure from how elections are conducted across the country. In fact, one bill introduced in January of 2021 would empower “the legislature to revoke a presidential elector's certificate of election by majority vote any time before the presidential inauguration, without regard to whether it is in regular or special session or has held hearings on the matter.” In other words, the state legislature could overturn the results of the presidential election if they saw fit, overturning the will of Arizona voters.

In addition to these moves, Arizona has enacted a bill that criminalizes the act of sending mail ballots to any voters who did not request one. Violators of this bill will be threatened with felony prosecution. As the AP reports, “Election officials have responded with warnings of a chilling effect on those responsible for administering the vote and counting ballots, raising fears they could be penalized for minor mistakes, get caught up in partisan fights or even leave their jobs.”

Even after the Arizona Senate spent at least $150,000 of taxpayer money on an election audit that only confirmed President Biden’s win, these politicians continue to push false claims of fraud in order to undermine and fundamentally alter how American elections are conducted.

Signed in March 2021, Georgia’s bill SB 202 introduced a host of changes to how Georgia conducts its elections. New laws include restricting the time periods for requesting and sending in a mail-in ballot and increased voter ID restrictions for voters requesting a ballot. Although the bill does increase access to early voting in most counties, it also bans mobile voting sites such as voting buses that were previously legal. Notably, the bill also prohibits individuals except for poll workers from handing out food or water to voters within 150 feet of polling sites.

One of the most impactful segments of the bill brings significant changes to the makeup of the State Election Board. The chair of the Board will no longer be the Secretary of State, and instead will be a nonpartisan appointee from the state legislature, which is currently controlled by Republicans.

The State Election Board has also been given more power to “intervene in county elections boards that are deemed underperforming.” As the New York Times wrote in July, local Republicans have already utilized this newfound authority, as “members of at least 10 county election boards have been removed, had their position eliminated or are likely to be kicked off through local ordinances or new laws passed by the state legislature.” Five of these officials were people of color, with the majority of them being Democrats.

In a state President Biden narrowly won in 2020, local politicians have responded to increased competitiveness in elections by increasing their authority to control these elections, while significantly altering how Georgia’s elections are conducted.

Texas’ much-publicized bill, SB 1, was signed by Governor Greg Abbot on September 7th, resulting in a large amount of new election rules aimed at altering how Texans can vote.

As the Texas Tribune reports, SB 1 “specifically targets voting initiatives used by diverse, Democratic Harris County, the state’s most populous, by banning overnight early voting hours and drive-thru voting.” This new bill also adds further restrictions to mail-in voting, provides partisan poll watchers with more freedom and protections, and makes the act of providing mail-in ballots to voters who did not request one a state felony.

Texas is increasingly becoming a battleground state in both local and statewide elections, and these restrictions will only make it more difficult for voters to exercise their constitutional right to vote.

We have to fight back

This report highlights how urgent passing voting rights legislation on the federal level is to safeguard our future elections. Even after the failure of the Arizona audit to produce any evidence of voter fraud, President Trump and his allies are planning on conducting more audits in states such as Wisconsin, Pennsylvania, and Texas, all while undermining the public’s faith in our elections.

RepresentUs is America’s leading nonpartisan organization fighting to protect and strengthen democracy. We unite independents, progressives and conservatives to pass pro-democracy laws, fight corruption, and defeat authoritarian threats. We have won more than 150 victories in cities and states across America since our founding 10 years ago. Each win is one step closer to our vision of making America the world’s strongest democracy.
We take your privacy seriously. You will receive periodic updates from RepresentUs and you can unsubscribe from our emails at any time. Learn more about RepresentUs and the American Anti-Corruption Act.
RepresentUs is America’s leading anti-corruption organization working city-by-city, state-by-state to fix our broken political system.