The Freedom to Vote Act wouldn’t just ban partisan gerrymandering and dark money, it would also increase access to the ballot box by setting baseline standards for early and absentee voting nationwide while protecting our elections from foreign interference. Meanwhile, the John Lewis Voting Rights Advancement Act would restore critical provisions in the 1965 Voting Rights Act that have been gutted by recent Supreme Court decisions, most recently Brnovich v. DNC.

Most Americans support these common-sense voting rights bills, and a majority of Senators do too.

In fact, support for the Voting Rights Act has historically been overwhelmingly bipartisan, including a unanimous 98-0 vote in 2006 that included ten Republicans who are still in their seats – and voted to block the John Lewis Voting Rights Advancement Act last Wednesday. 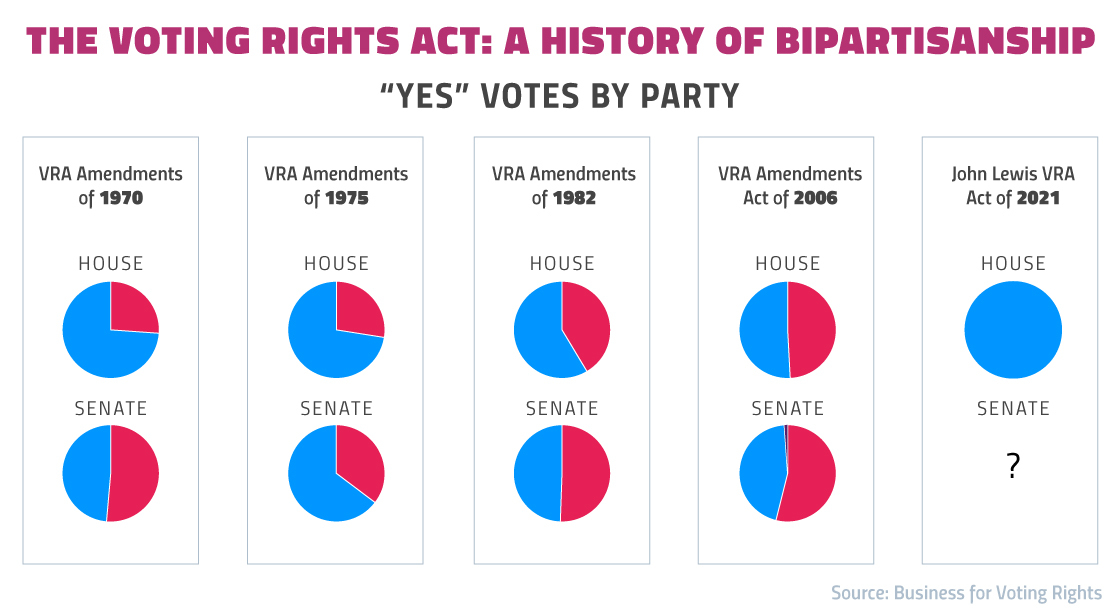 We desperately need these bills to be passed into law to stop rampant gerrymandering from rigging upcoming elections and block voting rights attacks passing in states across the country. So, why were these landmark bills blocked? Because our politicians are more interested in playing partisan games and protecting their own self-interests than serving the American people who elected them.

Let’s break down the archaic senatorial procedure of the filibuster that has brought the Senate to a grinding halt, preventing it from passing popular laws like the Freedom to Vote Act.

So in 1806, at Burr’s direction, legislators dropped the motion from the Senate rulebook. The Senators’ decision wasn’t about protecting minority rights or making the Senate this slow-moving body – it was simply because the Vice President told them to. Though the deletion of the “previous question” motion made the filibuster possible because the Senate no longer had a rule that allowed for a simple majority to cut off debate, the filibuster still did not yet exist.

Flash forward to the mid-1800s. The Senate was still operated by majority rule, and Senators expected that all matters would be brought to a vote. Then comes the Civil War. Polarization sky-rocketed, as did obstructionism over civil rights and election laws.

And then, in 1917, on the brink of World War I, Senators agreed on a super-majority rule to end debate, similar to the filibuster that we have today. During the Jim Crow era, obstructionist, white supremacist Senators took advantage of this amendment and filibustered every chance they had. Due to the organizing of the civil rights movement and leaders like Dr. Martin Luther King Jr. and Representative John Lewis, the Senate overcame the filibuster. It passed necessary, historic landmark legislation like the Voting Rights Act of 1965.

The history of the filibuster doesn’t end there. In the mid-1970s, the Senate decided yet again to reform the filibuster by adopting a “two-track” policy. The new agreement, meant to reduce gridlock, created a dual-tracking system so the Senate could work on multiple bills at a time. Awesome, right? Wrong. This seemingly harmless process essentially eliminated the “talking filibuster” which required Senators to hold the floor while executing a filibuster – blocking any and all Senate business until a cloture vote was held. The dual-tracking system inadvertently made it easier and more beneficial to filibuster a bill, as only the threat of a cloture vote became necessary to execute a “silent filibuster.”

So, here we are, in 2021, and this archaic rule is dominating our legislative process.

The filibuster is being used more and more frequently, increasing gridlock and hyperpartisanship. It’s stopping Congress from making progress on even the most popular issues. Yes, the Senate is supposed to be a place for healthy debate to reach a compromise and pass laws that will best serve voters. But that’s no longer happening. This isn’t how the Senate – or even the filibuster – is meant to work. Our founding fathers would be ashamed.

It’s time to reform the filibuster.

The Senate rulebook has been changed before, and it can be changed again. If we want to pass democracy-restoring voting rights legislation, we have to fix the filibuster now – before it’s too late.

Together, we can restore the Senate by reforming the filibuster so our most deliberative governing body can get back to the job of representing the voters – like they were elected to do in the first place.

And the moment the filibuster is fixed, the Senate must pass the Freedom to Vote Act and the John Lewis Voting Rights Advancement Act. Our democracy depends on it.

Join us in demanding the Senate reform the filibuster by signing below.

I’m writing to urge you to fix the filibuster and pass the Freedom to Vote Act.

The Senate is so dysfunctional that even the most popular bills are blocked. A majority of Americans, including me, support the Freedom to Vote Act. I'm tired of seeing the filibuster block this historic bill that stops dark money, ends gerrymandering, makes Election Day a holiday, and so much more.

Please fix the filibuster and pass the Freedom to Vote Act.