Jefferson City, MO  – Today RepresentUs, the nation’s largest grassroots anti-corruption campaign, endorsed the Clean Missouri Initiative. The initiative has submitted 346,956 signatures from across the state, and is awaiting certification. If certified, the initiative would appear on the November 2018 statewide ballot.

“We are excited to have the support of RepresentUs. Their support, along with 346,956 Missourians demanding change, demonstrates the bipartisan nature of anti-corruption reform. We’re excited to work with RepresentUs and their members to make the voices of everyday Missourians heard,” said Sean Soendker Nicholson, Campaign Manager for Clean Missouri.

“RepresentUs is proudly endorsing the Clean Missouri Initiative. When it comes to fixing our corrupt political system, real change comes from the people,” says Josh Silver, Director of RepresentUs. “Americans from across the political spectrum are leading incredible grassroots efforts to build a government that works for everyone, not just a handful of special interests and billionaires.”

RepresentUs has over 50 chapters, volunteers in all 50 states and over half a million members. RepresentUs members in Missouri have been working with Clean Missouri throughout the campaign.

In a recent Letter to the Editor posted by the St. Louis Post-Dispatch, RepresentUs St. Louis volunteer Steve Davey explains the American values at stake: “Our most sacred, foundational liberty — the freedom to self-govern — is being corrupted by big money interests in Jefferson City….Some politicians care more about huge campaign checks, junkets with lobbyists, and cashing in to become lobbyists themselves, rather than representing the will of their constituents. This is not fiscally conservative or ethical. ”

The proposed statewide ballot initiative will increase transparency, strengthen ethics and campaign finance laws, limit the influence of dark money in local elections, and combat the financial pressure and influence of lobbyists across the state by closing loopholes that allow unlimited money in elections. The initiative focuses on six main pillars of common sense public and campaign finance reform. The full language of the ballot initiative can be found here.

RepresentUs is the nation’s largest grassroots anti-corruption campaign, bringing together conservatives, progressives and everyone in between to pass anti-corruption laws in cities and states around the country.

###
To learn more about the partners active on the ground, visit the Clean Missouri Initiative. 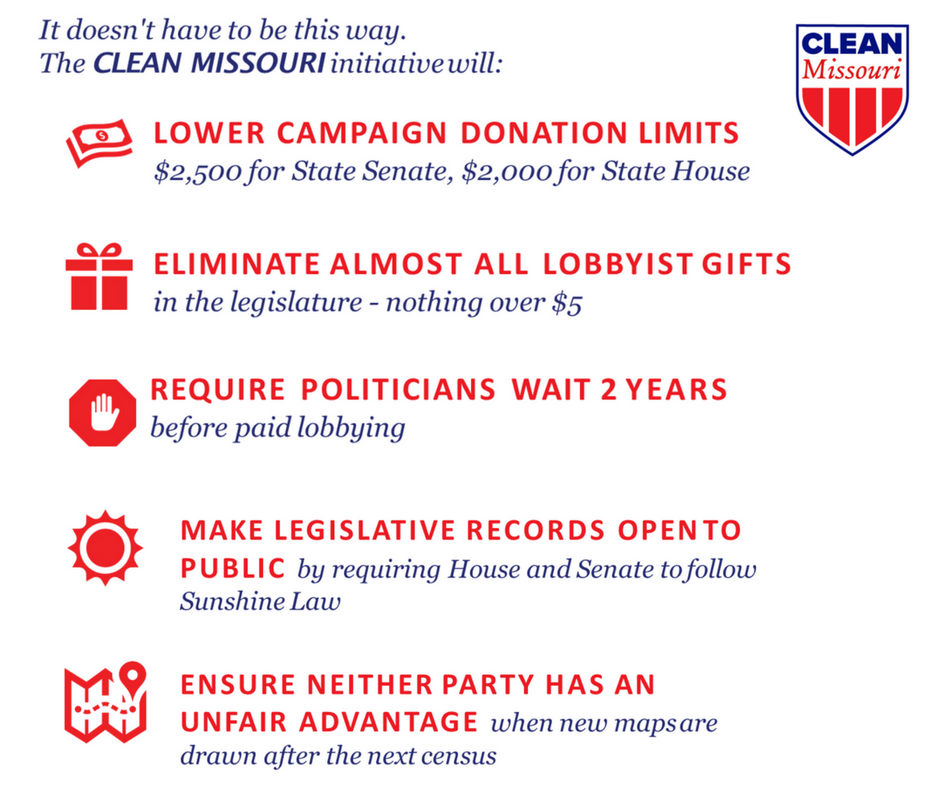 .
We take your privacy seriously. You will receive periodic updates from RepresentUs and you can unsubscribe from our emails at any time. Learn more about RepresentUs and the American Anti-Corruption Act.
RepresentUs is America’s leading anti-corruption organization working city-by-city, state-by-state to fix our broken political system.