As legislative committees meet this week to adopt criteria for this year’s redistricting process, and the U.S. Census prepares to deliver population data to states Thursday, a new poll from RepresentUs shows 89 percent of North Carolina voters oppose partisan gerrymandering. At the outset of this process, only 22 percent of voters trust the legislature to draw district maps.

The RepresentUs nationwide poll of 416 North Carolina voters was administered by YouGov.

Gerrymandering is when politicians manipulate voting maps to get desired outcomes, picking their voters and giving an advantage to political parties. North Carolinians across the spectrum oppose gerrymandering, including 89 percent of respondents who voted for former President Trump and 92 percent of those who voted for President Biden. Additionally, 70 percent of North Carolinian voters see gerrymandering as a major problem and 90 percent would oppose the practice even if their preferred candidate or party may sometimes lose the election. 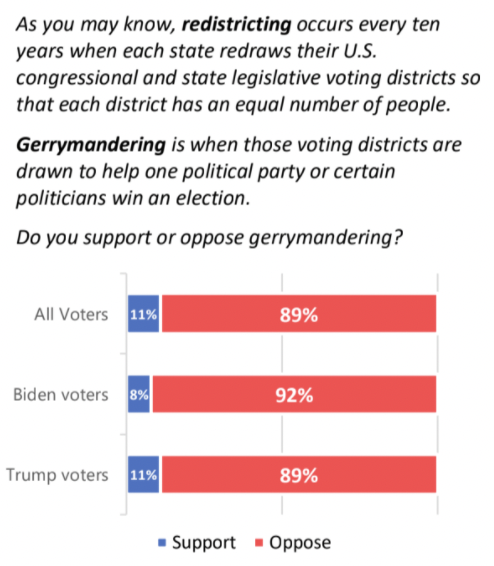 This poll follows the release of RepresentUs’ Gerrymandering Threat Index, which shows that North Carolina is at “extreme” risk of partisan gerrymandering this cycle. 35 states, including both blue states and red states, are at extreme or high risk.

Only 22 percent of North Carolinians trust state legislators to draw new districts. In fact, nearly 70 percent favor prohibiting state politicians from participating in redistricting. But voters also agreed on key reforms that would help restore trust in the system, including requiring transparency in the process (81 percent), banning the influence of lobbyists (78 percent), and prohibiting districts from being drawn to benefit one party over another (75 percent). More than 50 percent also indicated that they would have more trust in elections if leaders in both major parties agreed that the new maps were fair. 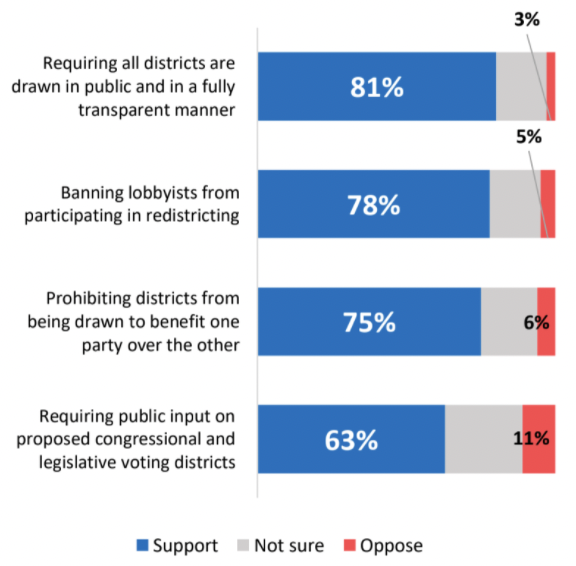