As the Wisconsin Legislature prepares to open the public comment period for the state’s redistricting process tomorrow and three redistricting lawsuits make their way through the courts, a new poll from RepresentUs shows 87 percent of Wisconsin voters oppose partisan gerrymandering. At the outset of this process, only 19 percent of voters trust the legislature to draw fair district maps.

The RepresentUs poll of 410 Wisconsin voters was administered by YouGov (crosstabs available here).

Gerrymandering occurs when politicians manipulate voting maps to get desired outcomes, picking their voters and giving an advantage to political parties. Wisconsinites across the spectrum oppose gerrymandering, including 81 percent of respondents who voted for former President Donald Trump and 93 percent of those who voted for President Joe Biden. Additionally, 69 percent of Wisconsin voters see gerrymandering as a major problem and 93 percent would oppose the practice even if their preferred candidate or party may sometimes lose the election. 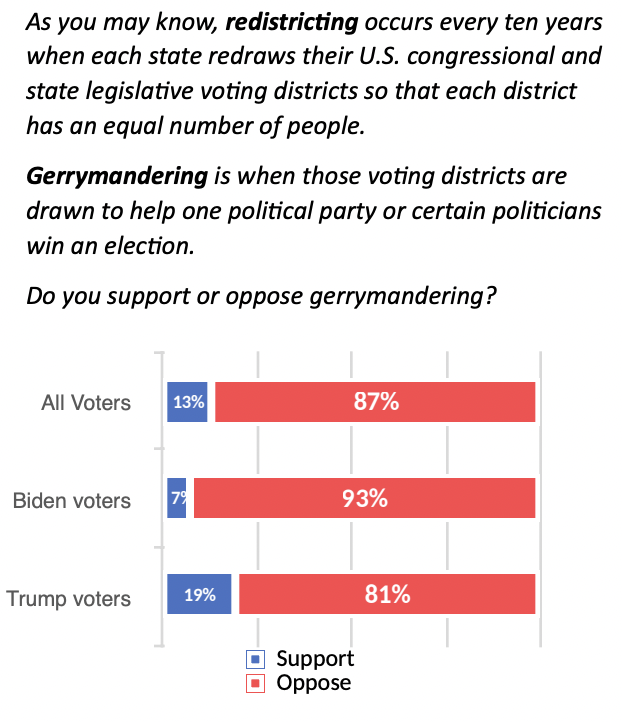 This poll follows the release of RepresentUs’ Gerrymandering Threat Index, which shows that Wisconsin is at “extreme” risk of partisan gerrymandering this cycle. 35 states, including both blue states and red states, are at extreme or high risk. RepresentUs has also partnered with the Princeton Gerrymandering Project on a Redistricting Report Card, a one-of-a-kind tool that will grade Wisconsin’s proposed maps and identify if and how badly it was gerrymandered.

Only 19 percent of Wisconsinites trust state legislators to draw new districts. In fact, 73 percent favor prohibiting state politicians from participating in redistricting. But voters also agreed on key reforms that would help restore trust in the system, including requiring transparency in the process (82 percent), banning the influence of lobbyists (78 percent), and prohibiting districts from being drawn to benefit one party over another (73 percent). Finally, 54 percent also indicated that they would have more trust in elections if leaders in both major parties agreed that the new maps were fair. 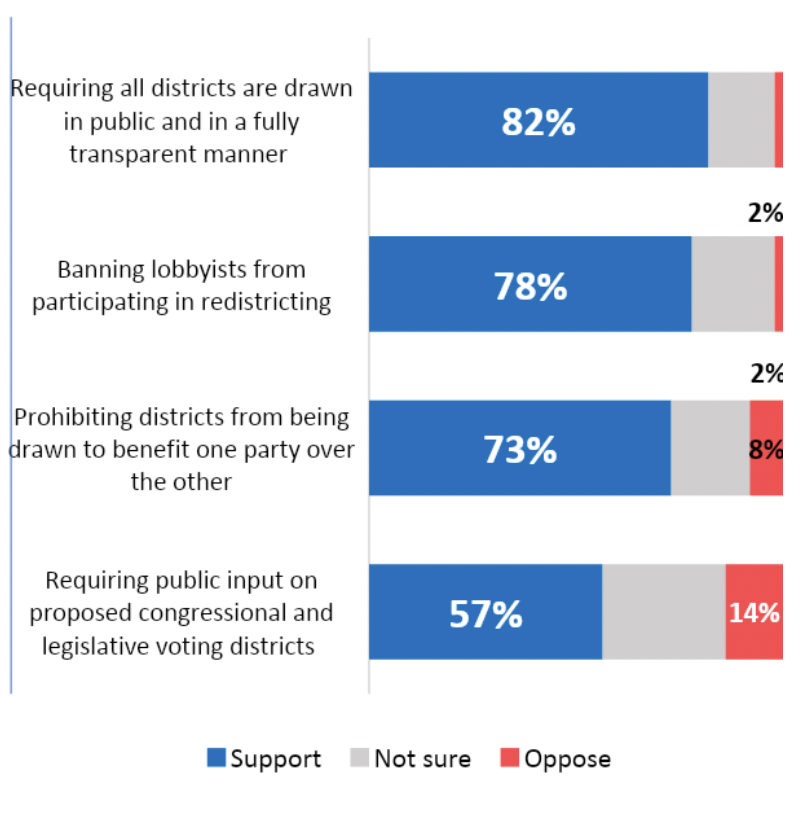 “These poll results suggest that removing control of drawing districts from partisan entities like the Wisconsin State Legislature would give voters more faith in government,” said RepresentUs Senior Director Joe Kabourek. “We’ll be watching this process very closely. And if and when unfair maps are proposed, we’re prepared to alert the public about how to fight back.”