The recently released Pandora Papers, an investigation published by the International Consortium of Investigative Journalists (ICIJ), highlight how the global elite have managed to shelter their wealth from taxes and government oversight for years. While countries such as Switzerland and Panama were previously exposed in the Panama Papers, another ICIJ investigation published more than five years ago, this newest investigation highlights the disturbing emergence of the United States as a tax shelter for wealthy elites from around the globe.

In fact, South Dakota has grown into a world leader in providing the means for billionaires to shelter their wealth from governments. While Delaware has previously been the most well-known US state accused of enabling global corruption, South Dakota has now taken the lead as the most prominent US-based tax shelter. According to South Dakota’s own numbers, the state’s trust industry held $367 billion worth of assets in 2020, up from $75.5 billion in 2011.

So what is a trust exactly?

As the Tax Justice Network describes them, trusts “involve a legal structure where a person (called the settlor) transfers assets to a trustee, who will hold the (trusted) assets under their name and manage them according to the settlor’s directions in favour of the beneficiaries appointed by the settlor.”

While this is fairly complex, Tax Justice Network points out that trusts are a major issue for two major reasons: secrecy and their ability to hide the contents of these trusts from governments, tax authorities, and other institutions. These trusts effectively allow massively wealthy individuals from around the world to hide their assets from their home governments, enabling them to dodge taxes and accountability for their wealth. In addition to governments, the Tax Justice Network highlights these trust owners have also sought to hide their wealth from “victims of sexual abuse and murder.”

What is America’s role in global corruption?

While South Dakota maintains by far the most trusts with 81, states such as Florida, Delaware, Texas, and Nevada all hold between 24 and 37 trusts. South Dakota’s aggressive moves to market itself as a tax shelter for wealthy individuals has led to a new arms race among US states. As Chuck Collins, the Director of the Programme on Inequality at the Institute for Policy Studies, told The Guardian, “We are the weak link. And South Dakota is in a race to the bottom to be the weakest link on trusts.” 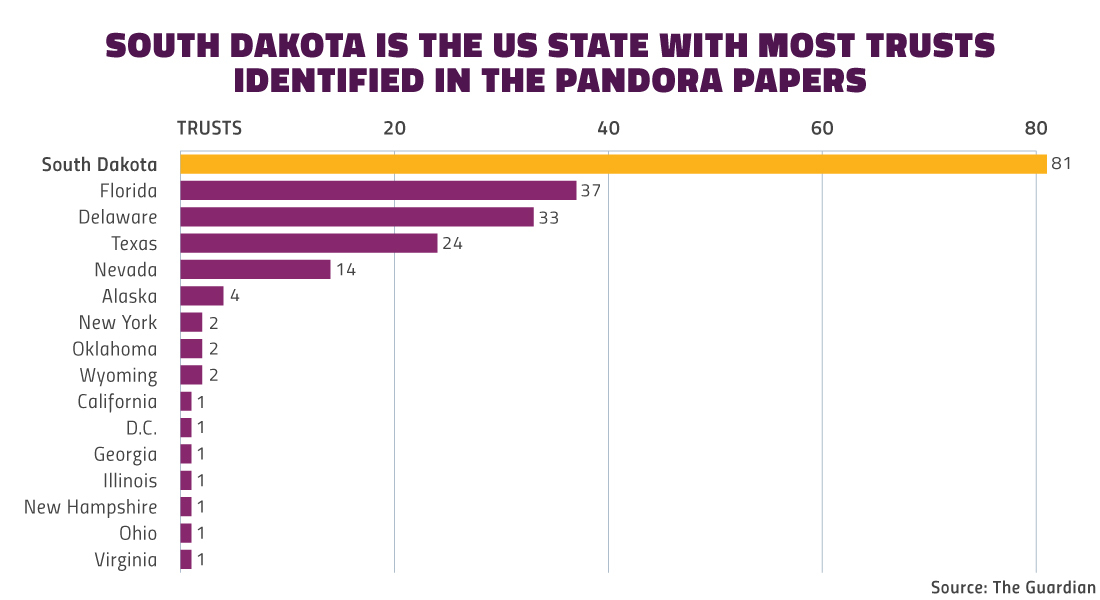 Some of the most prominent individuals named in the Pandora Papers had spent or hidden massive amounts of money in the US. Jordan’s King Abdullah II spent more than $100 million on 14 homes in the US and UK between 2003 and 2017. Jordan is one of the largest recipients of US foreign aid, receiving around $1.5 billion in 2020, and is located in a volatile region of the Middle East, bordering Syria, Iraq, and Egypt. Despite the Jordanian king’s massive wealth, Jordan’s economy has been severely hit by the COVID-19 pandemic, and its unemployment rate rose to nearly 25% in late 2020.

These examples highlight how the United States has grown to be a leader in global corruption. In fact, according to the Tax Justice Network’s Financial Secrecy Index 2020, the United States has now passed Switzerland, long known as a notorious location for tax shelters, and sits second place worldwide in the 2020 rankings of “enablers of financial secrecy.”

However, a bipartisan group of U.S. lawmakers have responded to these recent revelations in the Pandora Papers and are demanding that Congress take action. This proposed legislation, called the Enablers Act, is cosponsored by Reps. Tom Malinowski (D-N.J.), Steve Cohen (D-Tenn.), Joe Wilson (R-S.C.), and Maria Elvira Salazar (R-Fla.), representing a coalition of politicians from across the American political spectrum.

The Enablers Act would  require the Treasury Department “to create basic due-diligence rules for American gatekeepers who facilitate the flow of foreign assets into the United States,” according to the Washington Post. Currently banks must conduct due diligence into their clients’ sources of wealth, yet trust companies and law firms, among other organizations, have remained exempt from such requirements.

As Representative Cohen told the Post, “All around the world, countries are being looted and the most vulnerable people victimized by their elites. These kleptocrats then launder that money to the West, where they enjoy the high life — spending the money on luxury cars, penthouses, jets and opulent parties.”

For more stories like this and updates on democracy and corruption issues, sign up for our newsletter below!

A daily news digest delivered to your inbox with the latest on democracy reform, anti-corruption, the For the People Act, and the fight to unrig our system across the country.