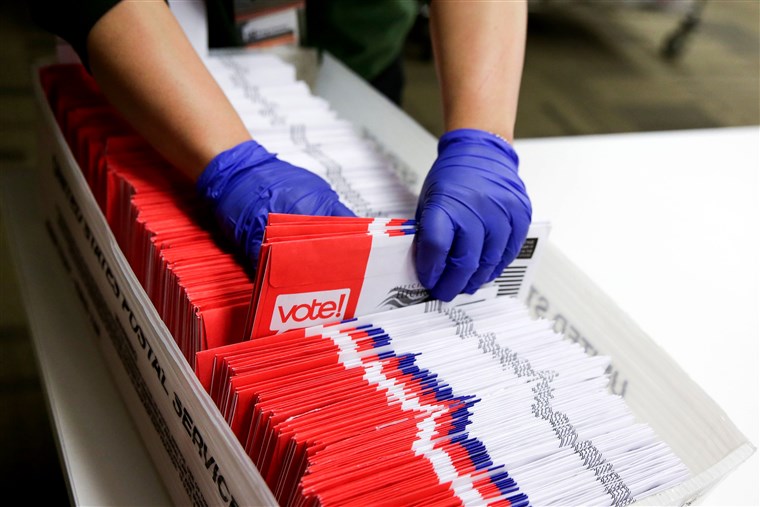 FLORENCE, MASS. (April 14, 2020): Pressured by Americans who want to vote safely, we are down to the “Late Eight” states that have so far refused to expand Vote by Mail amidst the coronavirus pandemic. New Hampshire and New York increased vote-by-mail options last week, leaving us with these states that have failed to act.

While some states are quickly expanding vote-by-mail options, the “Late Eight” states have yet to take action. Last week voters in Wisconsin were forced into long lines at limited polling locations, sparking outrage across the country and showing how COVID-19 could threaten upcoming primaries and the November general election. People should not have to choose between their health and casting a ballot.

Two other states had already broadened absentee voting for some elections below the statewide level: Arkansas and Massachusetts. Over the weekend, Virginia made their temporary reforms permanent by enacting legislation that will allow any registered voter to request an absentee ballot.

“The Late Eight states must act soon to protect voters. There is no time to waste. Every day that goes by is another day they are not investing the time and resources required to expand Vote by Mail,” said Josh Silver, Co-Founder and Director of RepresentUs.

Thousands of Americans have made calls and signed petitions asking their state representatives to immediately put to use their portion of the $400 million approved by Congress to expand vote-by-mail options and early voting, and improve safety measures. We recognize all states may need more funding, as The Brennan Center estimates we need $2 billion to run free and fair elections in the wake of the pandemic. Congress should provide more funding so that states can fully implement these solutions.

RepresentUs volunteers have made more than 7,200 calls to state and federal officials to ask for safe vote-by-mail options. They also texted more than 38,000 voters. The RepresentUs petition calling for Vote by Mail has more than 27,000 signatures.

Silver is available for phone or video interviews about RepresentUs’ campaign to expand Vote by Mail.

The second of our six-part, free, virtual Unrig Roundtable series takes place this Wednesday at 1 pm  ET. This time, we’re tackling digital warfare and how you can protect yourself and our democracy. With millions of Americans stuck at home and glued to our screens, fake news, deep fakes, and online psychological warfare threaten politics — and our personal safety — more than ever. Experts will show you how shocking these threats really are, and what we must do about it.

We’ll hear from Baroness Beeban Kidron, House of Lords, Film Director, Chair of 5Rights Foundation; Shoshana Zuboff, author and Professor Emerita, Harvard Business School; Ben Scott, the Executive Director of Reset; and RepresentUs Managing Director and Co-Founder, Joshua Graham Lynn on how we can protect ourselves and our democracy from digital manipulation.

Details on the series can be found here.