We cannot ignore racism. A message from RepresentUs

Is the Swamp Drained?
Here's what Trump Promised vs. His Actions 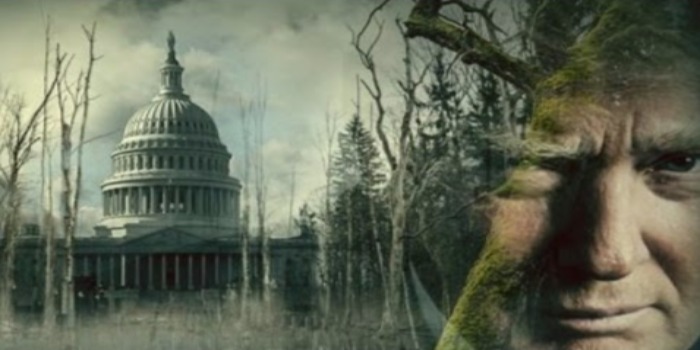 President Donald Trump's pledge to “Drain the Swamp” defined his campaign, a call-to-action against special interest groups and lobbyists in Washington. With the outsider now in office, it's important to ask: what has the administration done so far to reduce corruption? The answer – some, but not much. Let's break down Trump's promises and actions to date, before discussing how to fix the problem.

As a candidate running against the political establishment, Trump called repeatedly for stronger anti-corruption measures. His campaign ethics plan, for example, included five ethics reform points designed to “make our government honest again.” Here's how he planned to “drain the swamp”:

Three of those points – the executive lobbying, foreign lobbying and foreign fundraising bans – made it into Trump's plan for his first 100 days in office, alongside: 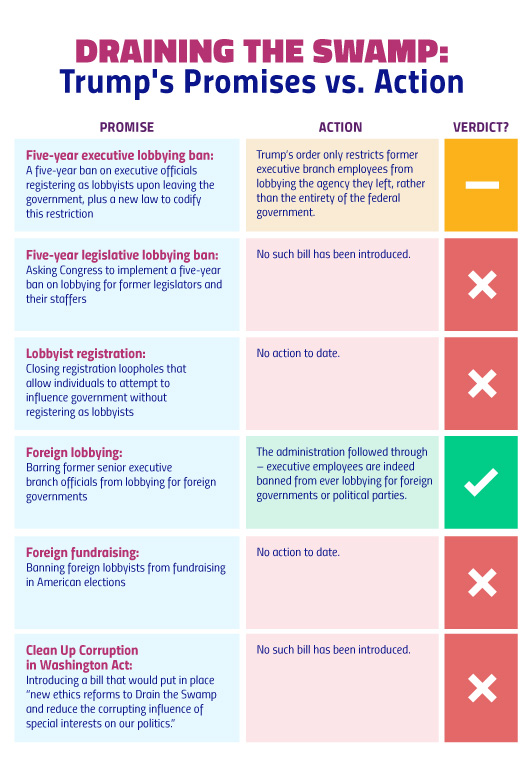 So, what has the Trump administration done? On January 28, the administration released an order that requires executive branch appointees to sign an ethics pledge that addressed some, but not all, of the promises listed above. As several commentators have noted, including POLITICO's Isaac Arnsdorf, this order actually falls short of the Obama administration ethics requirements in many places. Here are some of the pledge's highlights and how they compare to Trump's stated plans:

The number of lobbyists on Trump’s transition team should perhaps have forewarned that the administration would allow former lobbyists into its ranks. In terms of increasing general transparency – an important factor in comprehensive ethics reform – the administration has done little. As David Graham of The Atlantic points out, Trump's unwillingness to release his tax returns and apparent double-speak in maligning Hillary Clinton for giving paid speeches to Goldman Sachs and then tapping former executives of the bank for executive positions exemplifies the kind of course-correction the new administration will need to make in order to fight cronyism in a substantial way.

As for the proposed legislation:

To be fair, it's early. Trump's 100 days expire on April 29 and even then, the presidency requires addressing a whole slate of issues, some of which arise unexpectedly. Priorities may shift over time, but since “draining the swamp” was so central to President Trump's campaign, it is important to note that the actions taken so far appear insufficient to truly gird against corruption and reform ethics at the federal level. The actions taken to date are commendable, but the administration will need to push harder to make a real impact.

When Trump was first elected, Represent.Us published a guide describing how the new president could really fight against corruption while in office. Many of these changes are policies Trump hasn't delivered or even promised. Substantially shifting Washington's special interest culture would require implementing reforms found in the American Anti-Corruption Act, including:

These are reforms that would work to make Washington more transparent, empower all Americans to participate in their system of government and restrict secretive special interests. If the Trump administration is serious about draining the swamp, it needs to give more than lip service to real reform. This won't be a walk in the park; in fact, it will take time and energy and political capital. But fundamentally improving our political system to protect against corruption and elevate everyday people – truly making the nation great – is worth it.

Be part of the movement breaking big money's stranglehold on government.
We take your privacy seriously. You will receive periodic updates from RepresentUs and you can unsubscribe from our emails at any time. Learn more about RepresentUs and the American Anti-Corruption Act.