While the United States has long portrayed itself as a model democracy for countries around the globe, a recent report by an international think tank refutes this narrative. The International Institute for Democracy and Electoral Assistance (IDEA) analyzes 45 years of indicators in 166 countries for their annual report on global democracy. To analyze their data, IDEA utilizes 29 different indices, such as clean elections, free political parties, and level of corruption to evaluate democracies around the world.

Democracy on the Decline Around the World

For the first time since the annual report began in 2017, the United States has been classified as a backsliding democracy. And although IDEA only began publishing the report in 2017, their data goes back to 1975, meaning that this is the first time in 45 years that IDEA’s researchers have noticed such a decline. Unfortunately, the United States is far from alone in its democratic decline. Nearly three times as many countries are trending towards authoritarianism as are trending towards democracy. In the most recent report, IDEA contended that 20 countries are moving in an “authoritarian direction,” while only seven countries were said to be headed in a democratic one.

The report contains numerous other concerning news when it comes to the state of global democracy. This is now the fifth consecutive year that the number of countries sliding towards authoritarianism is three times as large as those moving towards democracy.  Even more alarming is that 70% of the world’s population now live in “countries that are either non-democratic or democratically backsliding, while only 9% live in “high-performing democracies.” The authors go on to note that the COVID-19 pandemic, as well as an unequal global distribution of vaccines, have contributed to democratic backsliding around the world.

The authors of the IDEA report shared their thoughts on the United State’s backsliding with the French news outlet Agence France-Presse. Co-author Alexander Hudson remarked that “the United States is a high-performing democracy,” one that even improved in certain aspects of democratic administration. “However,” he continued, “the declines in civil liberties and checks on government indicate that there are serious problems with the fundamentals of democracy.”

The report highlighted former President Trump’s false claims of fraud and attempts to overturn the 2020 election as a major warning sign. “A historic turning point came in 2020-21 when former president Donald Trump questioned the legitimacy of the 2020 election results in the United States,” the authors wrote. However, this was far from the only issue, as Hudson also emphasized the “decline in the quality of freedom of association and assembly during the summer of protests in 2020,” after the murder of George Floyd by police officers in Minneapolis. In fact, states across the country responded to those protests by passing new laws designed to punish protesters, and in some cases even allow drivers to run over protesters in the street without any legal repercussions. 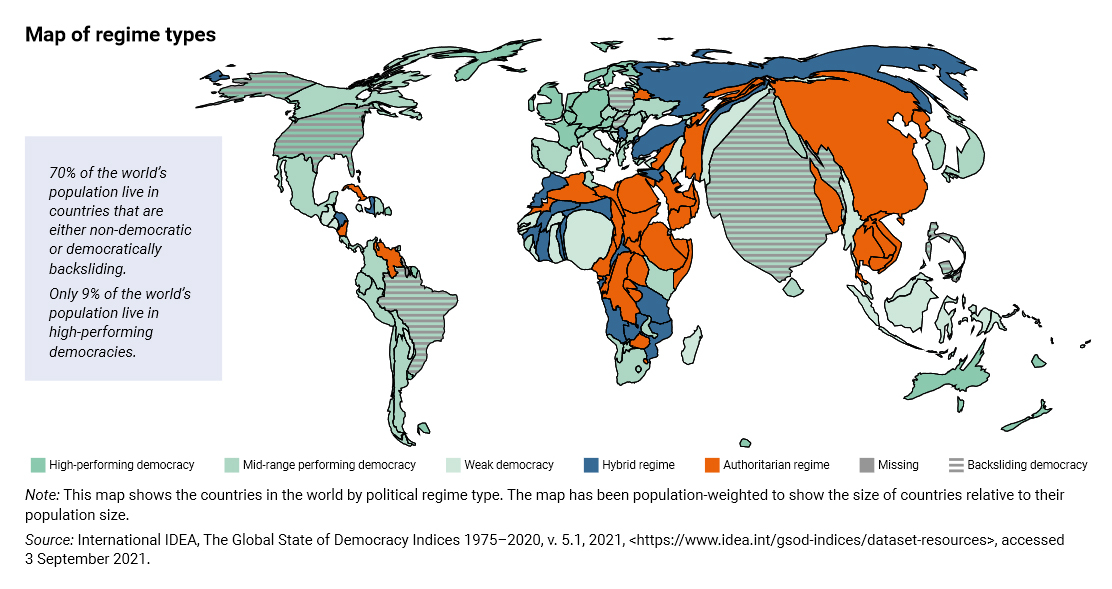 IDEA’s secretary-general Kevin Casas-Zamora voiced his concerns regarding the implications of a significant decline in American democracy, noting that, “the violent contestation of the 2020 election without any evidence of fraud has been replicated, in different ways, in places as diverse as Myanmar, Peru and Israel.” The world continues to look to the United States for guidance, and authoritarians in countries around the world have apparently replicated our strategies to undermine their own elections.

Even as President Biden hosted the virtual “Summit for Democracy,” American allies are experiencing issues with their own political systems. In fact, American-aligned nations are backsliding at twice the rate of non-American allies, according to Swedish-based non-profit V-Dem. As the New York Times reported in November, American allies such as Turkey, Hungary, Israel, and the Philippines have all seen significant declines in democratic freedoms in recent years. In fact, only 5% of global democratic increases occurred in the United States and its allied countries, while 36% of all democratic backsliding occurred in American-aligned countries. Just as American democracy is declining domestically, so is the United States’ ability to encourage democracy worldwide. The United States wants to once again serve as a global force for freedom, ensuring our own government works for all American citizens is a crucial first step.