Aerospace military contractor TransDigm was recently caught price-gouging American taxpayers to the tune of $16 million between 2015 and 2017.

The defense contractor’s nauseating practice of lining their own pockets with your tax dollars has prompted stinging, bipartisan condemnation. But that’s not the whole story. Here’s how the Pentagon is wasting millions of your tax dollars, and who’s profiting off of it.

The Pentagon wastes your money on overpriced parts

The recent scandal broke over findings that TransDigm, one of the largest military contractors, has been price-gouging American taxpayers by charging the U.S. government absurd prices on common items. 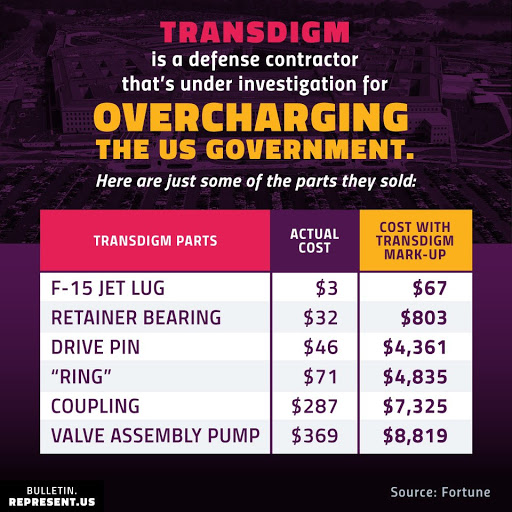 A recent review found that TransDigm potentially charged excess profits on 98 out of 100 parts sampled. TransDigm marked profits up by up to 9,380%, like when it charged the government $4,361 for a “drive pin” in a July contract that cost only $46 to make. Because of this, the Pentagon may end up paying TransDigm $91 million in coming years for parts valued at only $28 million.

That’s $63 million of your tax dollars going to line TransDigm’s pockets. This from a company that has been granted almost half a billion dollars from the government for nearly 5,000 contracts over five years.

Lawmakers from both sides of the aisle, including Republican Sen. Chuck Grassley and Democratic Rep. Alexandria Ocasio-Cortez, have laid into TransDigm’s officials over the insane markups.

Since 1990, Congress has accepted over $230 million from these defense contractors. And what have the contractors gotten in return? Legislation that allows contractors to lock in prices and corner the market, ensuring that they’re able to continue to overcharge American taxpayers.

Normally, market forces keep prices reasonable through competition. When multiple vendors sell the same item, they’re encouraged to undercut their competition by selling it for cheaper. But when there’s only one seller, the seller can jack up the costs as much as they like.

The same is true when the government is buying military parts. With only one contractor able to provide it, they can squeeze American taxpayers for every last dime. That’s why Congress passed the Truth in Negotiations Act (TINA) in 1962. The law requires contractors to provide the government with cost and pricing data on parts, when they’re the only contractor bidding for your tax money.

But the industry continues to exploit loopholes in the law in order to conceal pricing information and jack up prices. Despite multiple opportunities to amend the law and close these loopholes, Congress has yet to take action on them.

What’s more, a law passed in 2016 ensures defense contractors never have to lower prices. The 2016 NDAA included a provision that essentially locks the Pentagon into a price. If they overpay once for a part, they’ll overpay again and again.

The Pentagon lost track of $21 Trillion

Since 1990, all departments and agencies in the federal government have been required to submit to annual audits. While every other government agency or department has complied with the law, Congress had to order the Department of Defense to submit to an audit by a third party.

Officials soon discovered that the department’s financial records were so riddled with bookkeeping irregularities and errors that a reliable audit was simply impossible.

While the DoD’s Acting Secretary blamed the size of the department’s budget for the difficulty in auditing, some reports say that the DoD has an ongoing and pervasive practice of using fabricated numbers to deceive Congress, and laundering money to different parts of the DoD’s budget. Indeed, a searing op-ed from Senator Chuck Grassley (R-IA) calls out the “fraud and abuse” at the DoD.

“Year after year, Congress shovels more money into the Pentagon’s coffers. Those funds are meant to ensure that our military is the best in the world. Instead, they’re squandered to the tune of hundreds of millions of dollars.” — Sen. Grassley (R-IA)

Looking over the Pentagon’s financial transactions between 1998 and 2015, a mind-numbing $21 trillion could not be traced, documented, or explained—that’s five times the entire annual federal budget, and a few trillion more than the entire U.S. Gross National Product. While this doesn’t conclude that all of that money was misused, it also doesn’t rule that out. In the end, no one can account for whether or not $21 trillion in government money was spent legitimately.

The Department of Defense is riddled with industry insiders 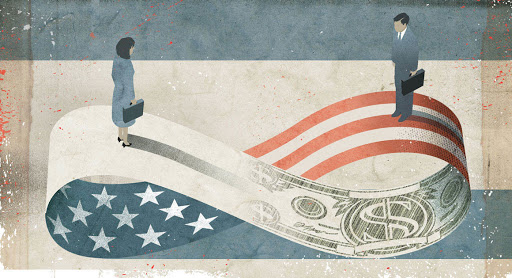 A report from the Project on Government Oversight (POGO) found 645 instances in the past decade where senior officials, members of Congress, and senior legislative staff left office to become defense contract lobbyists, board members, or business executives. Around 90% of these former government officials became lobbyists.

The Trump administration has been repeatedly called out for its practice of staffing ex-execs of defense contractors in the Pentagon. Benjamin Cassidy, now the Assistant Secretary for Legislative Affairs, worked as a senior executive at Boeing. Secretary of the Army Mark Esper worked as a senior executive at Raytheon for seven years before he joined the Department of Defense.

But it’s not a practice the Trump administration invented. Case in point: Obama-appointed William Lynn became second in command at the DoD after spending a decade as a lobbyist for Raytheon. There’s also a long established practice of former Pentagon officials leaving office for high-paid industry jobs—and bringing their government rolodecks with them.

Until recently, Patrick Shanahan was the Acting Secretary of Defense. Shanahan has been criticized for having previously worked for Boeing, one of the largest defense contractors, for 31 years.

Despite having signed an ethics agreement promising not to get involved in matters with the defense contractor, Shanahan praised Boeing and bashed competitors in his time as Secretary. He also pushed the Pentagon to purchase $1.2 billion in Boeing F-15X fighter jets. The Air Force has stated they aren't interested in this outdated model.

The Pentagon is wasting your tax money and ignoring the voices of everyday Americans. But you can do something about it.

We have a plan to unrig our broken political system—and it’s working. In 2018, RepresentUs members helped pass 23 anti-corruption reforms across the country—that’s more than any other time in American history. We’re gearing up for even more in 2019 and 2020.

Join us to get involved.