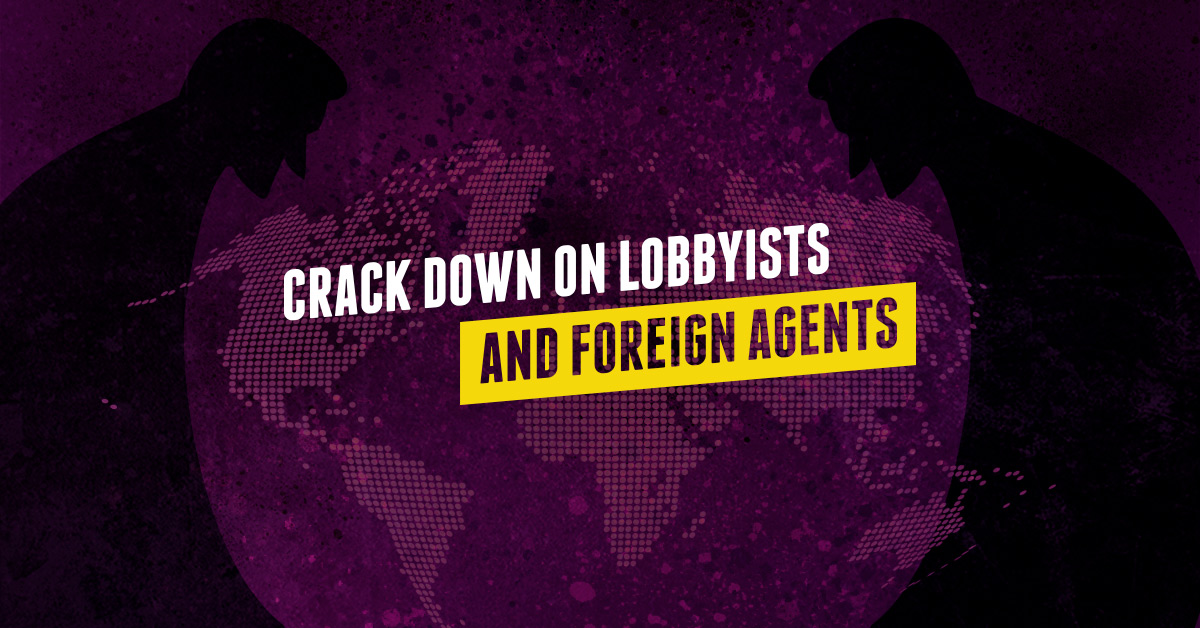 Foreign interests have paid more than $530 million since January 2017 to influence the U.S. government and public opinion.

That’s more than half a billion dollars, funneled from special interests overseas, to lobbyists and foreign agents operating in the United States.

The recipients of all this foreign money are required by law to register and report on their activities under the Foreign Agents Registration Act (FARA). The truth is that the law is only rarely enforced and foreign agents flout its requirements.

Why do lobbyists for foreign governments and corporations disregard U.S. law? Because they know they won’t get caught. For years, the Department of Justice has relied on an official policy of “voluntary compliance.”

As Vox has reported, “A 2016 audit of FARA by the Justice Department’s inspector general found “widespread delinquencies” in compliance rates. Their review of documents filed from 2013 to 2015 found that:

How can the Department of Justice put faith in “voluntary compliance” when the disclosed information is late and incomplete?

The American people deserve to know exactly who is working for foreign governments to influence us and our elected officials.

Tell the Department of Justice to crack down on lobbyists and foreign agents by enforcing the law. The time for “voluntary compliance” is over.

No one actually knows how many people should be registered under the law but recent developments indicate that the Washington elite don’t worry too much about ignoring it.

The Paul Manafort Case Shows the Limits of Disclosure

The trial of former Trump campaign chairman Paul Manafort has shed light on foreign lobbying influence and the failures of voluntary compliance. Manafort and his business partner Rick Gates allegedly earned $75 million working on behalf of a Ukrainian political party but never reported the arrangement under FARA.

Manafort was working on behalf of then-Ukrainian president Viktor Yanukovych when he hired three lobbying firms to provide assistance, with each receiving more than $1.1 million for their work.

Three men at those firms are now in the spotlight after special counsel Robert Mueller uncovered their role in supporting Manafort’s Ukraine lobbying. The three under scrutiny are:

None of the three men registered as foreign agents under FARA.

The Podesta Group collapsed late last year, partially for its involvement with Manafort. Meanwhile, another lawyer at Gregory Craig’s firm has already pled guilty for perjury in another aspect of Mueller’s investigation.

It shouldn't take a special counsel to enforce existing protections against foreign lobbying. When DC insiders like Manafort, Gates, Craig, Weber and Podesta can’t be bothered to disclose that they’re working for foreign parties, something is seriously wrong with enforcement.

FARA is not a suggestion, it’s the law. Tell the Justice Department to start acting like it.

To: The Department of Justice

Since 2017, more than $530 million has flowed into our country to influence public opinion and our elected representatives.

We, the American people, demand to know who is on the payroll.

Enforce FARA with a firm hand and end your policy of "voluntary compliance." The law is the law.