What is a filibuster?

A filibuster can refer to any tactic a senator uses to extend debate on a bill and block it from being passed.

More specifically, in the U.S. Senate today, a filibuster allows a minority of senators (or even one senator) to extend a debate as long as they want. This is typically done to delay action on a piece of legislation they oppose. Debate could theoretically go on forever, blocking a final vote indefinitely. (But this isn’t how it used to be — more on that below.) 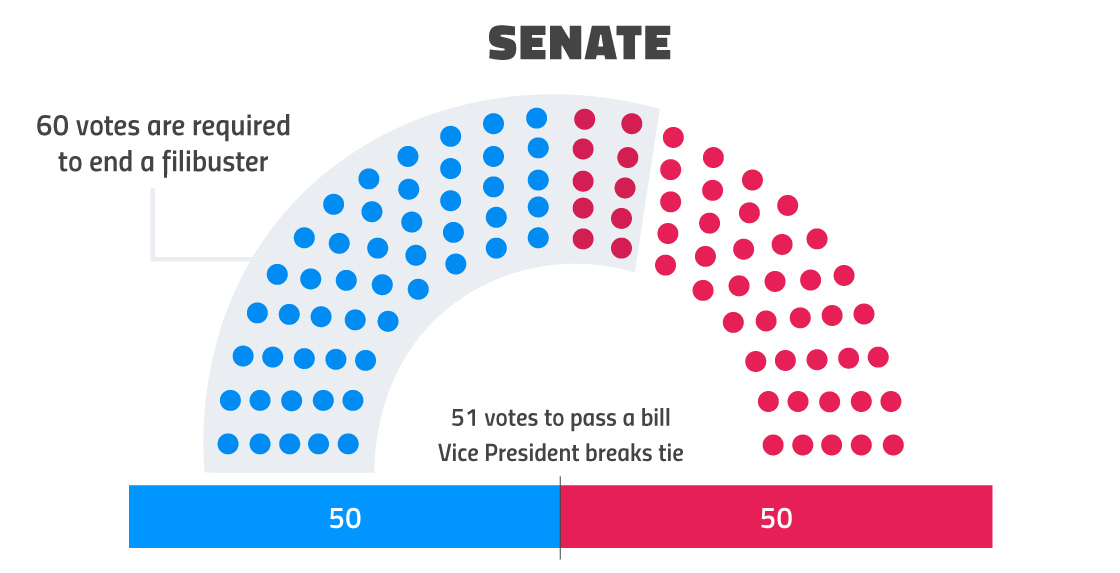 When most people think of a filibuster, they imagine a senator standing up and talking for hours on end to block a bill. While it used to work that way, you might be surprised to learn that today’s filibuster looks nothing like that.

Voting to end a filibuster is actually harder than passing a bill. Senate rules require a supermajority of 60 votes — three-fifths of the total chamber — to stop a filibuster and move a bill to a vote. Meanwhile, it only takes 51 votes to pass that same piece of legislation in the Senate. The process of ending a filibuster is called invoking cloture.

For decades, people on both sides of the aisle have called for reform or elimination of the filibuster, while others have defended it as a valuable core of U.S. democracy that maintains checks and balances.

What is the history of the filibuster?

Technically, the filibuster dates all the way back to ancient Rome, and it’s been part of American democracy for centuries. In the U.S., it’s undergone several reforms and revisions over its lifespan.

The practice of filibustering legislation became more popular around World War I, when anti-war senators in the minority used it to block bills by talking for a long time. As more senators started filibustering, the Senate decided it needed a way to end these lengthy debates. In 1917, the Senate enacted the first form of cloture, where two-thirds, or 67 members, of the Senate could vote to end a filibuster.

The Senate further revised the filibuster in 1975, reducing the number of votes required for cloture to three-fifths of the Senate, or 60 senators.

In the 1970s, the Senate also adopted a “dual-track” system where senators can set aside one stalled bill to focus on other legislation. This procedure, which continues today, eliminated the “talking filibuster” — now senators don’t have to talk during the entirety of a filibuster. While this system keeps the legislative process moving, it has also made it so senators can use the filibuster more easily and frequently.

Even in the last decade, the Senate has continued to alter the filibuster. Both Republicans and Democrats have made tweaks to the filibuster in order to push forward certain timely nominations or bills.

Has the use of the filibuster increased?

Since “filibuster” is a broad term that can refer to a wide range of bill-blocking actions, it is difficult to measure how often senators have done it. Invoking cloture — or voting to end debate on a bill — is a much more formal process. Researchers typically look at the use of cloture as a proxy for understanding how frequently the filibuster is used.

The use of cloture has become much more popular since the 1970s, growing from about 25 motions filed in 1977 to 150 in 2018. This means that filibustering has most likely increased as well.

That said, the exponential growth in cloture motions doesn’t necessarily equate directly with a matching increase in filibustering. Sometimes, the Senate invokes cloture before anyone even announces a filibuster, just to ensure a bill moves to a vote quickly.

Pros and Cons of the Filibuster

Here are what some people consider to be the pros and cons of the filibuster, based on how it impacts the legislative process. 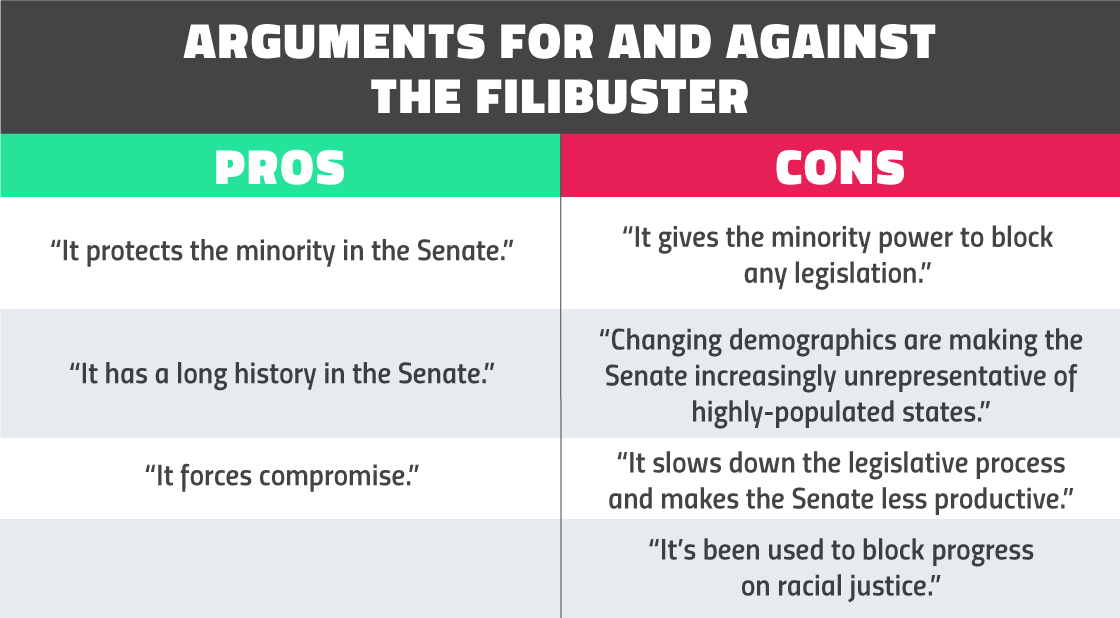 What are the arguments in favor of the filibuster?

“It protects the minority in the Senate.” Many people believe the filibuster is an important tool for the minority party to block the majority from enacting its agenda unilaterally. By empowering the minority, the Senate maintains strong checks and balances on the legislative process, and helps ensure that bills have broad support to pass. This can be especially important for less populous states that have less representation in the House.

“It has a long history in the Senate.” The filibuster has existed in some form since the United States was in its infancy. Taking the filibuster out of our legislative process would mean changing an integral part of how Congress has operated for decades.

“It forces compromise.” The minority can use the filibuster to block any bill they don’t support. So, if the Senate majority wants to pass legislation, they have to gain bipartisan support or else risk a filibuster. This ensures that new bills work for both parties and, ideally, a greater portion of Americans.

What are the arguments against the filibuster?

“It gives the minority power to block any legislation.” Technically, a single senator can completely derail a bill if 60 senators can’t agree to invoke cloture. If a bill fails to pass because a small minority is against it, is that representative of the greater desire of the people?

“Changing demographics are making the Senate increasingly unrepresentative of highly-populated states.” Since each state has two senators, regardless of population, residents of large states have less power over the lawmaking process. With population patterns changing, it’s estimated that by 2040, two-thirds of the country will be represented by just 30% of the Senate. This means the Senate minority may be representative of a very small population of the U.S.

“It slows down the legislative process and makes the Senate less productive.” Today’s Senate is the least productive in history. The chamber only passed 278 bills in 2020, as opposed to 1,000 in 1971, and over 2,000 in 1955. Since the very purpose of the filibuster is to slow down and block bills from passing, it could be a big reason why fewer bills are passing.

“It’s been used to block progress on racial justice.” Historically, the filibuster has been used as a tool to block bills advancing civil rights, racial justice, and workers’ rights. According to the Senate’s website, “filibusters proved to be particularly useful to southern senators who sought to block civil rights legislation, including anti-lynching bills.”

What would happen if the Senate removed the filibuster?

The most likely result of outright eliminating the filibuster would be that more bills would pass. The filibuster has blocked a number of major bills from passing in the last 20 years.

Without the filibuster, it would be easier for the majority party to pass legislation without opposition. Because Democrats currently control the majority of the House and Senate, eliminating the filibuster would likely mean a lot of laws authored by Democrats would pass. But, if the Republicans gain control of the Senate again, they too would have a much easier time enacting their agenda.

How would removing the filibuster work?

What is the filibuster "nuclear option"?

The “nuclear option” is another way to change the filibuster that's more complicated but more likely to pass. Instead of changing the law itself, the nuclear option would involve creating a precedent. A precedent clarifies how the rules of the Senate should be interpreted and used. It could add certain restrictions to the filibuster rule, making it harder to filibuster or easier to invoke cloture.

A precedent is also easier to get passed because it can be enacted with support from only a simple majority of senators. Both parties have used the nuclear option as recently as 2013 and 2017 to change the filibuster process for cabinet nominations and judicial positions.

Could the Senate strengthen the filibuster instead of removing it?

Instead of flat-out abolishing the filibuster, the Senate could make changes that strengthen the filibuster. Filibuster reform could help ensure the Senate is an effective and functional body that still encourages minority input and bipartisanship. Here are a few options being considered:

The “talking filibuster”: Require filibustering Senators to hold the floor. When most people think of filibustering, they imagine a senator standing up and talking for 24 hours — just like in the classic movie Mr. Smith Goes to Washington. In today’s Senate, however, the “dual-track” system allows senators to attend to other business if one item is stalled. Because of this, filibustering is fairly easy and painless, so it’s become much more common.

The talking filibuster would change this by requiring at least 41 minority senators to physically hold the floor the whole time they are filibustering, and take turns talking nonstop. All business would be stalled until one of two things happen: The majority party pulls the bill, or the number of filibustering senators falls under 41. This is a much more exhausting form of blocking a bill, so it would likely discourage senators from using it quite as frequently. It could ensure that the perspective of a minority group of senators is fully heard — but not allow the same group to unilaterally block taking a vote on a bill.

Eliminate the filibuster to begin a debate. When the Senate votes on a “motion to proceed,” it is beginning the debate on a bill or other piece of business. This motion requires a simple majority. However, if the motion to proceed is filibustered, it requires 60 votes to begin debating the bill, which can make it much harder for the Senate to consider a piece of legislation.

Make it easier to move to a vote after debating. 60 senators must vote to successfully end a filibuster, but sometimes there are not even 60 senators present at debates. There are a few ways to reform this:

What will happen to the filibuster?

Members of both parties have used the filibuster to their advantage, and there are also a wide range of suggested reforms that could strengthen or weaken the filibuster. While the filibuster is likely to remain a part of the Senate, it’s also bound to continue evolving as it has for the past century.