After a back-and-forth political battle, New Jersey Gov. Phil Murphy finally signed an anti-dark money bill into law. S-150, the "End Dark Money" bill, promises to bring needed reform to a state plagued with a history of corruption. It's also a stunning victory for one of the longest-running RepresentUs chapters, whose leaders have been on the frontlines of this grassroots legislative pressure campaign since its inception.

The bill, which sailed through the New Jersey Senate and Assembly with near-unanimous, bipartisan support, puts an end to dark money. Now, independent lobbying groups that donate to political campaigns have to disclose their funders. That way, voters will know exactly who is trying to influence elected officials.

Read on to find out what the dark money is, how this bill works to unrig our political system, and how RepresentUs members in New Jersey—and across America—fought to get it passed.

There are strict disclosure laws for political parties and candidates—but outside groups like PACs and nonprofits don't have to share where their funding comes from. This leaves a glaring loophole in the law that special interests exploit.

Instead of donating directly to a political candidate, special interests shuttle their money through outside groups. They donated to independent groups, which in turn donated to campaigns. By hiding their actions in these third party groups, bad actors could conceal their identity all while maintaining their grip on our political system. 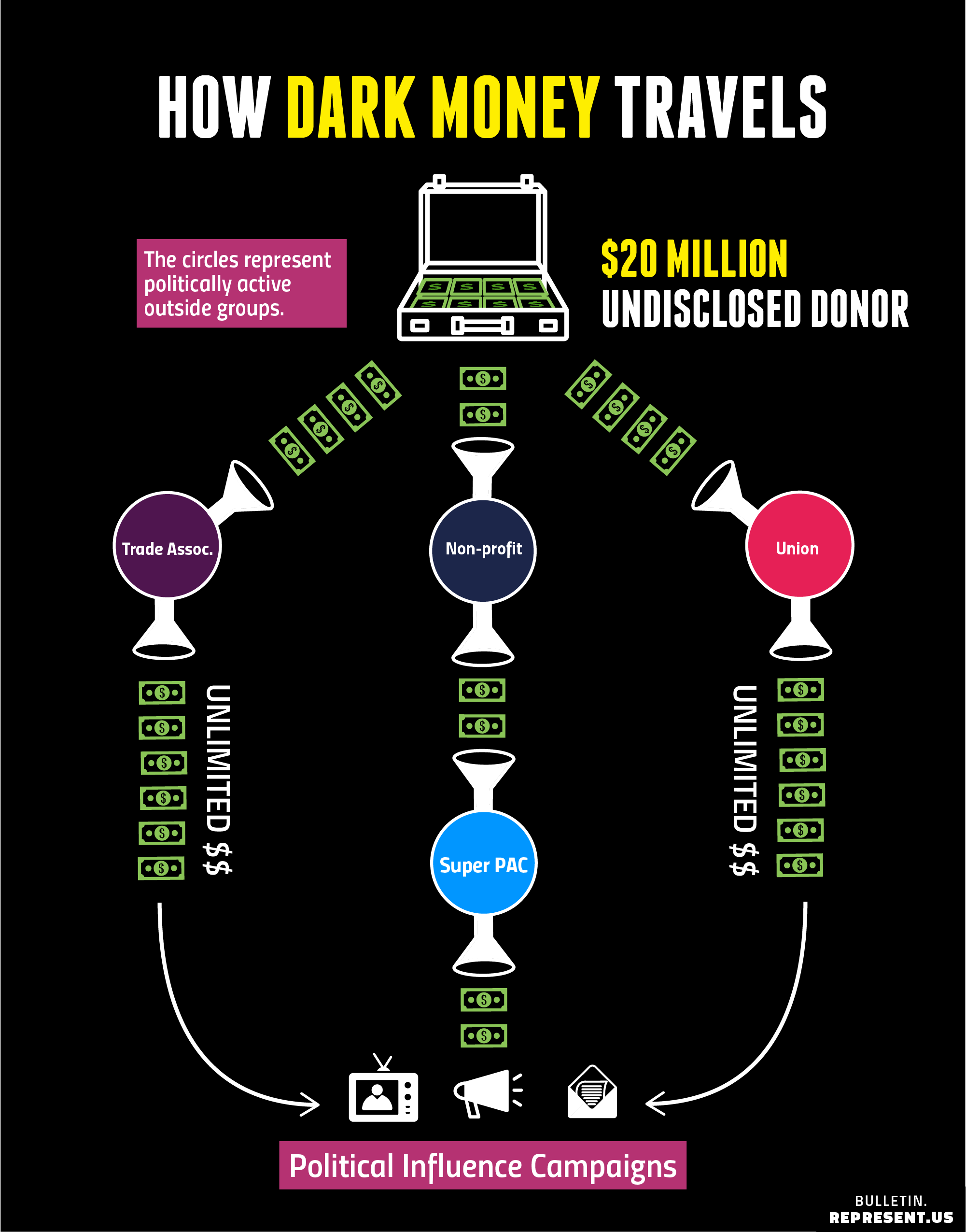 For years, candidates running in New Jersey have been able to accept huge sums of money without the public knowing where the money came from.

And we’re not just talking about pocket change here. In 2017, these dark money groups spent almost $50 million in New Jersey’s gubernatorial and legislative races. That’s nearly three times the amount spent by the political parties and committees that must disclose their donors.

What does this mean for everyday Americans? It means that campaigns and special interests are pulling the wool over our eyes. Voters can’t see the true intention behind any political ad we see.

New Jersey’s “End Dark Money” bill puts a stop to this practice by requiring these politically active outside groups to disclose their donors, so Jersey voters know exactly who’s trying to influence their votes. 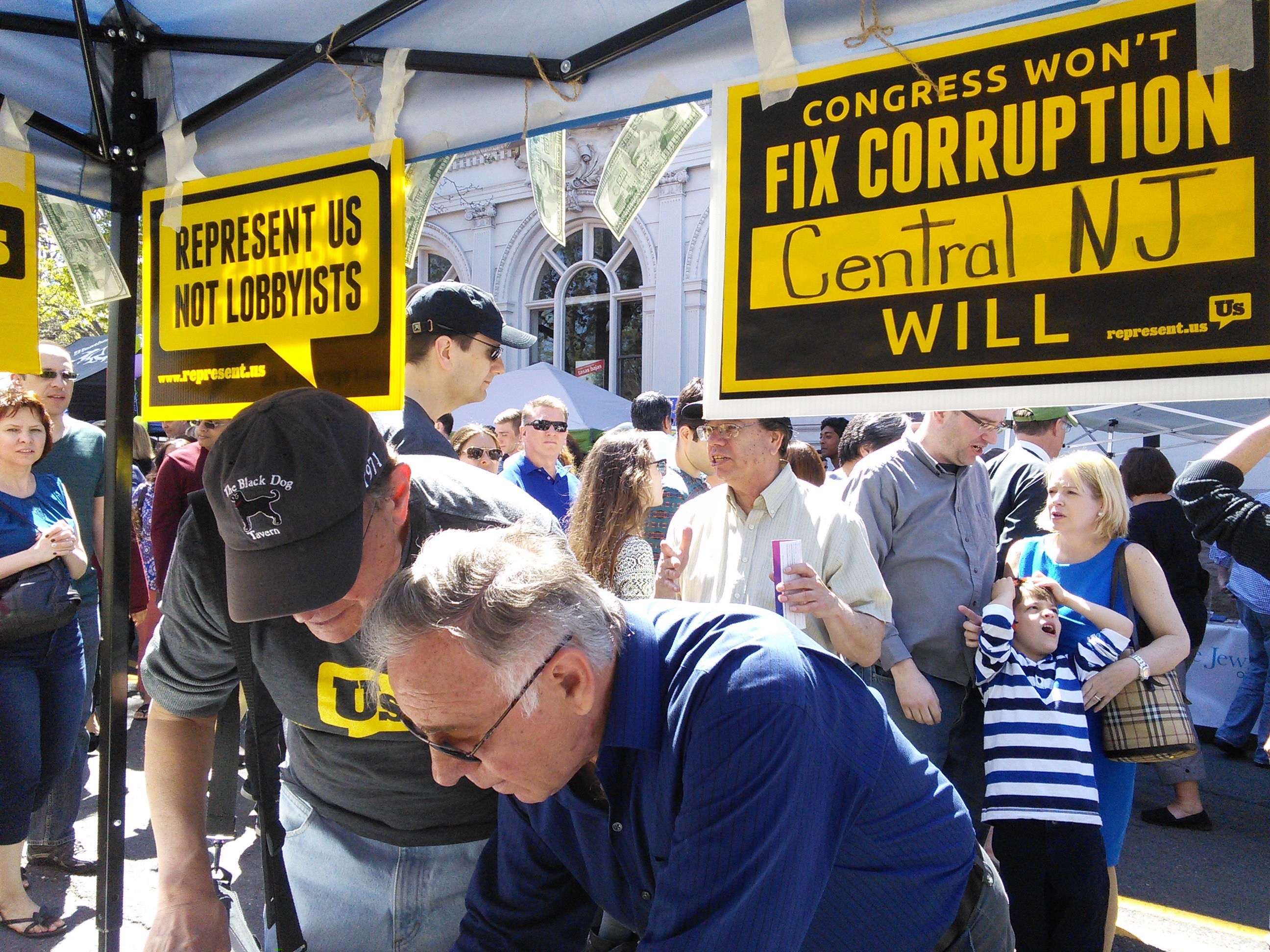 They founded a RepresentUs chapter in 2014 and later that year became the first group ever to pass a local American Anti-Corruption Resolution. Since then, Represent New Jersey has passed local resolutions in seven other towns and cities, and amassed a membership of more than 18,000 people.

The chapter worked with other reform organizations, built important relationships with lawmakers, and cultivated the idea among fellow New Jersians that corruption is not an intractable issue without recourse, but an issue that can be solved when dedicated advocates put their passion into change.

David and Susan were planting the seeds, tending to the growing anti-corruption movement in New Jersey, and building an impactful resistance to the status quo.

Bringing Dark Money into the Light

As momentum grew from passing resolutions across the state, Represent New Jersey turned its sights on a binding statewide bill to end dark money. David testified in front of the New Jersey Senate, and the chapter drummed up grassroots momentum throughout the legislative session.

In the weeks before Gov. Murphy was expected to sign the End Dark Money bill into law, RepresentUs members joined the fight. Volunteers in New Jersey and across America called New Jersey voters and patched them through to the governor's office, swamping his voicemail with calls to sign the bill.

In a last minute twist, Murphy conditionally vetoed the bill, prompting outrage from the legislature and motivating Represent New Jersey into action. David penned an op-ed and the chapter worked tirelessly behind the scenes to fight establishment attacks.

Finally, under pressure from the legislature and the people of New Jersey, Gov. Murphy agreed to sign the original bill into law in June. Assemblyman Andrew Zwicker, who sponsored the bill, gave special thanks to Represent New Jersey when news broke that Murphy would pass S-150.

“I especially want to thank everyone in RepresentUs of New Jersey who have been working tirelessly not just for weeks and months but for years, because they understand that transparency is critical if we are going to ever regain the trust of the public. This bill goes a long way to achieving that goal.”

In a state with a history of rampant corruption and an abysmal D grade in integrity from the Center for Public Integrity, these organizers have a solid strategy, a unifying message, and are leading the way on anti-corruption reform.

This campaign shows us that even when establishment politicians attempt to thwart good-government legislation, RepresentUs members are ready to step up, fight back, and secure a win. 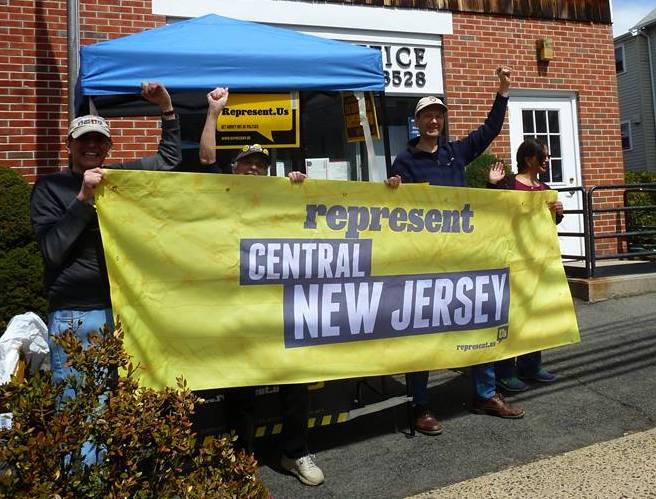 From the first steps of building a local anti-corruption community to their first statewide victory with S150, David and Susan have worked tirelessly to end corruption in New Jersey, one battle at a time. Passing local reforms built the momentum needed for this state-wide victory. This is the strategy in practice: grassroots members building their power from local, to state, and eventually federal reform.

Our plan to fix our broken political system isn’t just working—it’s winning. In 2018, RepresentUs members helped pass 23 anti-corruption reforms across the country—that’s more than any other time in American history. The passage of New Jersey’s “End Dark Money” bill marks the movement’s 104th win, and we’re gearing up for even more in 2019 and 2020.

None of these wins will be possible without a strong network of volunteers. So whether you’re hoping to bring meaningful change to your local community, reform statewide policies, or help build national momentum for anti-corruption reform, you are the key to this movement's success.

To learn more about the plan to win, check out our strategy video. To join our volunteer network, head to the RepresentUs virtual volunteer network and say hi to introduce yourself and meet other volunteers across the country fighting for reform.

Together, we’re putting power back in the hands of everyday Americans, and working across the political spectrum to unrig our broken system.