Every four years American citizens 18 years and older are eligible to cast their vote for the president of the United States. Seems simple - but many voters don't realize they aren't directly voting for the president. Why? Because we use a system called the Electoral College to elect the president and vice president.

What is the Electoral College?

The Founders set up the Electoral College for a few reasons:1

The Electoral College is a system where citizens indirectly elect the president and vice president through a body of 538 electors.

Electors almost always cast their vote for the candidate who wins the popular vote in their state, which explains why we have election results available on Election Day. However, the Constitution does not require them to do so. There have been a few instances where electors defected from their pledged vote, but it has not changed the outcome of an election.

How many electoral votes are there and how many are needed to win?

The number of electors for each state is equal to the number of U.S. Senators and Representatives in the state’s delegation. To win the presidency, a candidate must receive a minimum of 270 electoral votes. 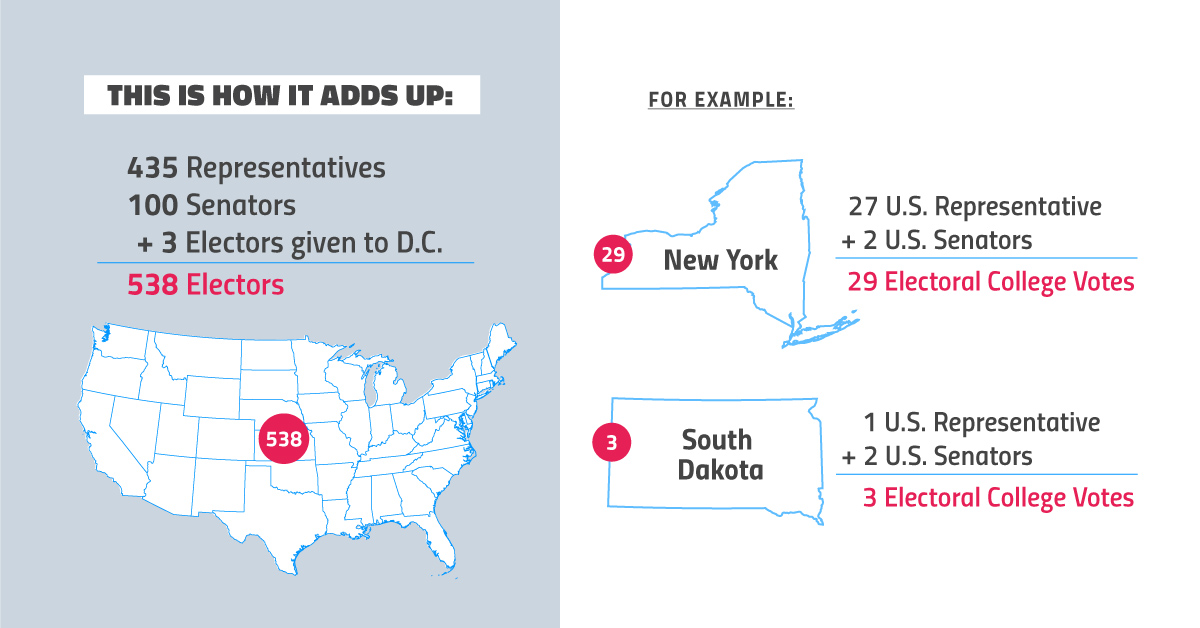 What does “winner takes all” mean with electoral votes?

In Nebraska and Maine, Electoral College votes are assigned in part by the presidential results in each of their congressional districts.

What happens if a candidate doesn't receive 270 votes?

If no candidate receives 270 Electoral College votes, the president is then selected by the House of Representatives. Each state gets a single vote.

What is the Popular Vote?

When we receive the results from any presidential election, we are give two different results: the Electoral College and the popular vote. The popular vote is simply which candidate has received the most total votes.

Are we getting rid of the Electoral College?

The short answer is: no, not right now. However, many states are taking measures towards electing the president by a popular vote.

The National Popular Vote is a nonprofit working to implement a national popular vote for president, by creating an agreement among the states to elect by national popular vote. The compact will go into effect when enacted by states possessing a majority of the electoral votes (270).

An updated list of all the states that have passed a state-wide bill to enact the national popular vote can be found here.

When in effect, states that are in the compact will guarantee their electoral votes go to the winner of the national popular vote, guaranteeing the president of the United States will be elected by popular vote.

Why do some people want to abolish the Electoral College?

Candidates focus too much on Swing States

In the current system, there are states both Republicans and Democrats are guaranteed to win and so presidential candidates can ignore those states and focus instead on just a few  “battleground” or “swing” states. Battleground states are those that are a toss-up to either candidate. Often with many electoral votes at stake, these are where candidates spend most of their time and resources competing for votes. These states have a lot of power and can decide the outcome of a presidential election.

Small states get too much power

Critics of the Electoral College claim it gives outsized power to small states because they are guaranteed three electoral votes despite lower population size.

Two of our last three presidents won the presidency without winning the national popular vote.

What states have an advantage with the Electoral College? And which states are at a disadvantage?

Meanwhile, people in states that have a large population but are not battleground states lose the value of their own vote because electoral votes are already decided and there is less incentive for candidates to spend time campaigning in that state. This perception of a loss of the value of their vote can decrease voter turnout.