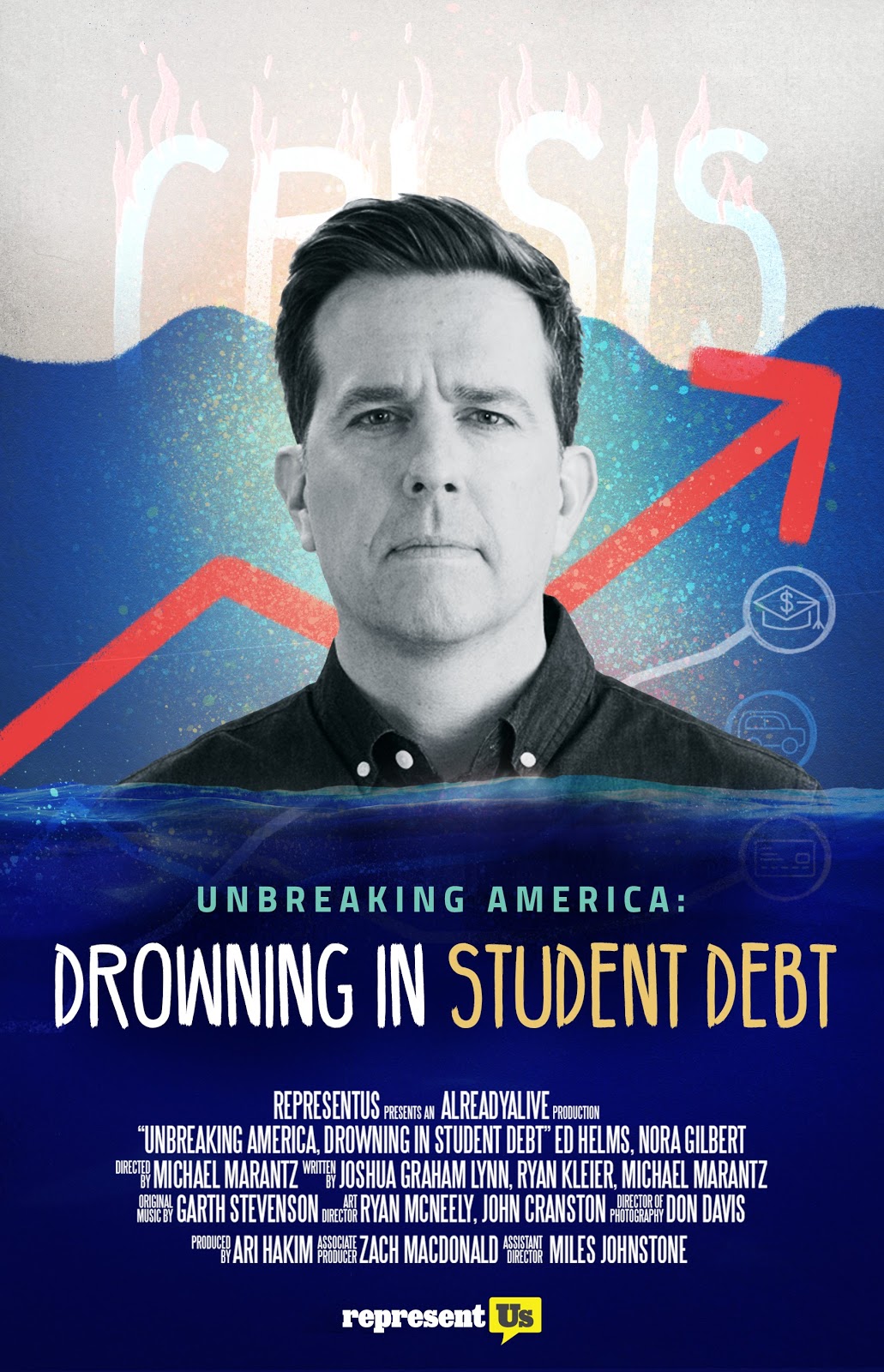 The Actor Stars in Unbreaking America: Drowning in Student Debt, a new Short Film from RepresentUs; Urges Americans to Support the “For the People Act”

New York, NY (February 2, 2021): More than 44 million people in the United States are buried under $1.6 trillion dollars in federal student loan debt. And every year the crisis continues to get worse, preventing people from buying houses, saving for retirement, and realizing their dreams.

In a new short film from leading right-left anti-corruption organization RepresentUs, Unbreaking America: Drowning in Student Debt, actor Ed Helms explains how we can help fix our student debt crisis by taking political power away from the big banks, lobbying firms and financial institutions that profit from student loans, and putting power in the hands of the people. He then tells us how a groundbreaking anti-corruption bill moving through Congress right now, the For the People Act, would crack down on corruption.

“We finally have a real opportunity to fix the government corruption that is causing the student debt crisis as well as blocking progress on every other issue that you care about. And remarkably, it doesn’t involve pitchforks and torches. It’s called the ‘For the People Act’ and we all need to get behind it right now.” said Helms, a member of the Board of Directors of RepresentUs.

You can watch Unbreaking America: Drowning in Student Debt here.

In the latest film in a series produced by RepresentUs, Unbreaking America, Helms details how crippling student debt is a symptom of our broken political system. Massive financial institutions use lobbyists, campaign donations and their insider political connections to skew federal policy to protect their interests and pad their profits.

Fortunately, there is hope. The most powerful, sweeping federal anti-corruption law since Watergate is moving through Congress right now. The For the People Act would fundamentally reshape American politics. It would break partisan gridlock by taking political power away from lobbyists, political insiders and profiteering financial institutions. The bill ends gerrymandering, protects and secures our elections, and restores and protects voting rights.

RepresentUs is building on the success of more than 120 statewide anti-corruption victories to mobilize millions of its members behind passage of the For the People Act.

Unbreaking America: Drowning in Student Debt comes at a time when President Biden has deferred student loan payments until October and is considering an executive order to forgive some student loan debt. But these actions won’t fix the underlying cause of this crisis.

Through the continued passage of state and local laws that fix our broken elections, fight against gerrymandering, stop political bribery, and end secret money, RepresentUs advocates for the federal passage of the bi-partisan American Anti-Corruption Act (aka The For The People Act in Congress) to restore a government that is once again by and for the people. To date, the movement has passed 114 transformative anti-corruption acts and resolutions in cities and states across the country—and in 2018 passed more anti-corruption reform than in any other year in America's history.