Presented by RepresentUs, “Tonight We Laugh, Tomorrow We Vote.”

Los Angeles, CA (10/29/20): On Election Eve, Nov. 2nd, many of America's biggest stars will join together for the second-ever Telethon for America to create the biggest voter turnout in history and combat voter suppression and disinformation. In addition to being a night of comedy, live performances and a live celebrity video bank, the event will offer critical voter protection information.

The event is presented by fiercely non-partisan anti-corruption organization RepresentUs and will air live at 9 pm ET/6 pm PT on Free SpeechTV and simulcast on TelethonForAmerica.com, and the social media platforms of RepresentUs and celebrity talent.

Hosted by award-winning actress Rosario Dawson and comedian, actor, and television host Ben Gleib, the event is free and open to the public to watch live. Flipping the traditional telethon on its head, instead of donations, viewers are asked to make a pledge to cast their vote on Nov. 3rd, and to bring their friends to the polls. A few lucky viewers will get a chance to join the show live on air, and speak with some of their favorite stars in one-on-one video chats. The telethon was created by Ben Gleib in 2018 and helped achieve the historic voter turnout we had in the midterm elections.

“I know we hear this a lot, but this is the most important election of our lives. And no matter what side you’re on, voting is how we take care of each other. It’s how we protect the things that make us American. A huge turnout is how we can protect the election and make cheating or complaints of fraud moot. It’s why this telethon matters so much-it helps us take care of each other,” said actress, political activist, and executive producer of Telethon for America Alyssa Milano.

This election season, widespread voter suppression, and misinformation are being used in an attempt to delegitimize the 2020 Presidential election, putting our democracy in peril. Telethon for America relays the importance and power of voting to a nation at a crossroads by countering voting myths and offering crucial tips and resources to empower voters--such as knowing your rights at the polls, states with same-day voter registration, how to get discount rides to vote and a voter protection hotline--in an eleventh-hour action to create the biggest voter turnout in American history.

“Differences of opinion are part of what makes our nation great. But that’s not a license to weaponize them to turn us against each other, deprive us of our sacred right to vote, or use disinformation to throw our democracy under the bus,” said Ben Gleib, creator and host of Telethon for America. “I created this event as a way to fight that, and start a tradition of us gathering on Election Eve, across party lines, to remind ourselves of our core values, and to laugh together. Because nothing bridges the divide better than making each other laugh.”

“The United States is currently near the bottom of the list, number 26 out of the 32 leading democracies of the world, for voter turnout. My generation is the first to witness America become less democratic -- forced to contend with the outsized influence of big money in politics and the most voter suppression since the Jim Crow era,” said Renaldo Pearson, Chief Diversity Officer and Director of External Affairs at RepresentUs. “With this telethon, RepresentUs hopes to do our part as leaders of the pro-democracy movement and connect the dots between the long-game (electoral reforms) and the short-game (the next election) to unrig the system.”

About the Telethon for America

Telethon For America is a live digital telethon and entertainment show created by comedian, actor, and television host Ben Gleib and hosted by award-winning actress Rosario Dawson and Ben Gleib to encourage voters to head to the polls ahead of the 2020 Presidential Election. It is the first telethon ever that aims to raise zero dollars and instead asks viewers to pledge to vote. The telethon features A-list celebrities and includes live performances, comedy, music, and interaction with a celebrity video bank getting fans and potential voters ready to vote on November 3rd.  This event follows the 2018 Telethon for America hosted by actress Olivia Munn and Ben Gleib to increase voter turnout in the 2018 midterm elections. You can read more about Telethon for America here. 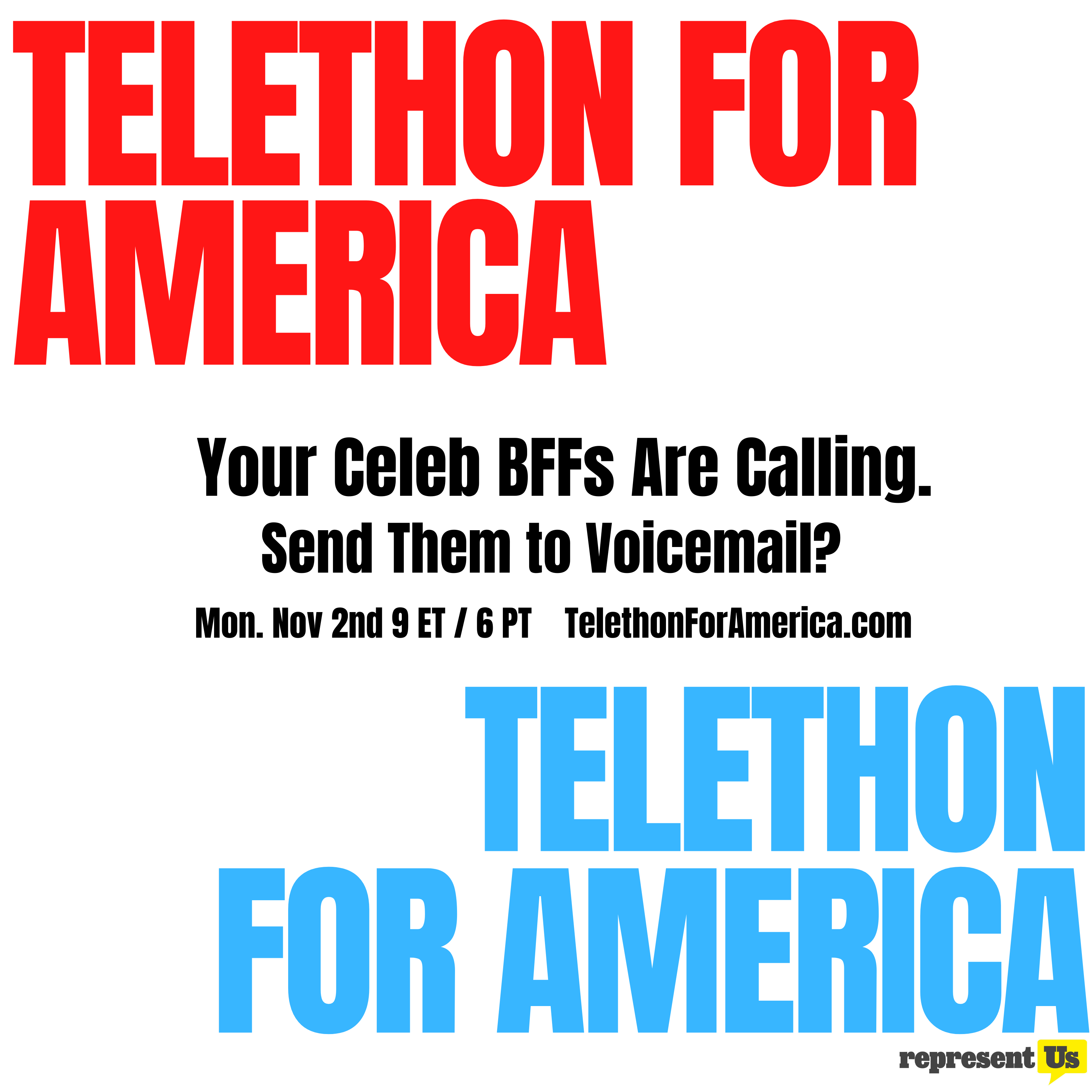