In September 2020, RepresentUs launched a cross-partisan coalition with more than 70 former generals, admirals, and veterans to Count Every Hero – ensuring every service member’s ballot is counted before a winner is declared.

Military members have been voting by mail since the Civil War and mail-in ballots have always been counted. But this year, there's been a widespread effort to undermine mail-in ballots. We count on our troops to fight for our freedom, so we owe it to them to count their ballots. This cross-partisan campaign advocated for counting the ballots of our military heroes.

Count Every Hero shared objective, nonpartisan information regarding voting and processing ballots. This wasn’t about partisanship — it was about ensuring that our service members had their voices heard and their votes counted.

Here’s a snapshot of the impact we made with the Count Every Hero campaign: 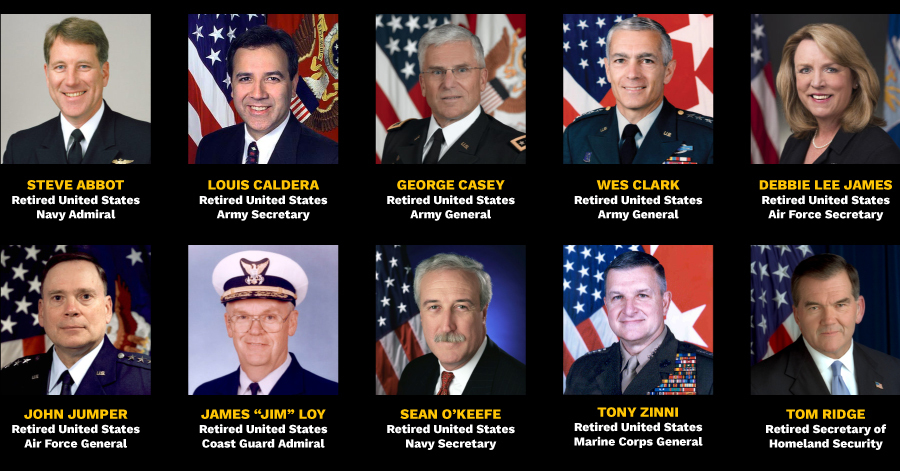 The campaign to Count Ever Hero brought on over 70 endorsers, ranging from top brass generals and admirals to current service personnel. They lent their voices and expertise to the campaign, serving as media spokespersons to help Americans everywhere understand that military ballots must be counted.

The campaign was covered in top media outlets

Count Every Hero earned significant media coverage from outlets like CNN, ABC, The Hill, Military Times, Task and Purpose, McClatchy, and Military.com, uplifting the voices of service members and veterans to reach Americans across the country and across the aisle with one simple message—it’s imperative that we Count Every Hero this election season, no matter how long it takes.

Our spokespersons participated in press calls, podcast interviews with outlets like Veterans Voices, and were represented in state outlets across the country such as the Miami Herald, Houston Chronicle, and San Diego Times. An interview on NPR’s The World that featured our spokespersons was featured in more than 200 local stations across the U.S., Canada, and Germany.

We Released a Report on Military Voting

With so much uncertainty surrounding ballot counting this year, it was imperative that we share nonpartisan, objective research to show how many service members and their families might be affected if a winner were declared before every vote was counted. Our research team created a report to paint an accurate picture.

The report, Military Voting in All 50 States, relayed important insights about how service members’ votes factor into this historic election and highlighted trends of absentee voting in years past. The report also provides state-by-state rules for counting military ballots—including an easy-to-read chart and map. 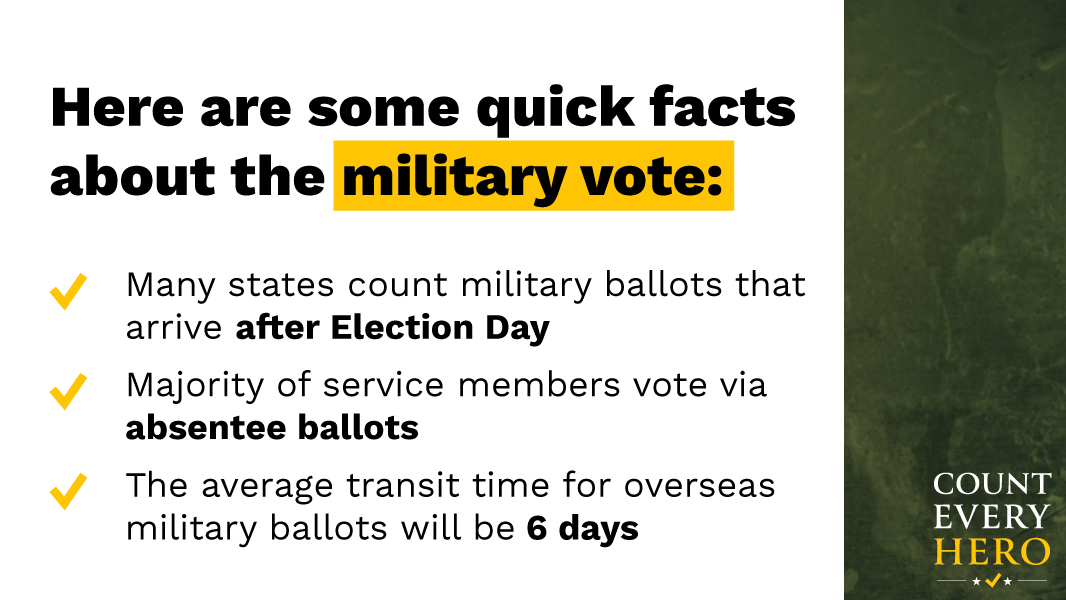 We Demanded Media Outlets Wait to Call the Results

News outlets report on election results and play a large role in validating the outcome of the election. TV news hosts must agree to wait on mail-in ballots to declare a winner if all military votes are to be counted. Count Every Hero launched an ad campaign seven days before the election to hold the media accountable.

We Built a Strong Coalition

We were proud to join the Military Vote Coalition, a group of military family and veteran support organizations whose mission is to increase voter participation. The coalition promotes policies that increase awareness and voting accessibility for veterans and military families. By joining together with other veteran organizations, we were able to spread our message and support GOTV efforts across the political spectrum.

This year, due to the pandemic, increased civilian mail-in voting, and additional strain on the U.S. Postal Service, we should expect significant delays in the arrival of overseas military absentee ballots to county election boards here at home. The Military Postal Service Agency estimated the average transit time this year will be six days.

The Count Every Hero campaign reached millions of Americans who needed to hear the urgent message that counting mail-in ballots from our military heroes is essential to our functioning democracy. It is not a partisan position to want the votes of all eligible citizens counted – and our campaign demonstrated that through the voices of service members who deserve to have their voices heard.

This election season, it is our patriotic duty to be patient. There exists a real probability that tens of thousands of military absentee ballots won’t make it home until after the polls close.

With your help, we can reinforce public trust in the electoral process by allowing trusted local election officials the time and space to accurately certify the results of the election. Sign up below to join the fight today.