On November 3rd, more than 60 voting rights advocates, including Martin Luther King III and RepresentUs Executive Director Josh Silver, were arrested while demonstrating at the White House in support of the Freedom to Vote Act.

We have no time to waste on passing historic voting rights legislation to save our democracy – but despite most Americans supporting the Freedom to Vote Act, obstructionists in the Senate have used the filibuster to stop the Senate from even debating the bill. That doesn’t mean we bow down, give up, and stop fighting for our democracy. It means we go to the streets. And that’s what we did. 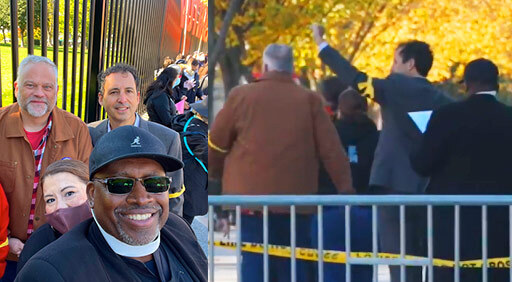 Right before his arrest, Silver spoke to the crowd, saying:

Nearly two weeks ago, partisan obstructionists blocked the Freedom to Vote Act with the filibuster. On Wednesday, November 3rd, while the “No More Excuses: Voting Rights Now” activists were being arrested for fighting for our democracy, those exact Senators blocked the John Lewis Voting Rights Advancement Act (VRAA) using the same tool.

Why? Because politicians are more interested in playing partisan games than serving the American people who elected them.

We desperately need these bills to be passed into law to stop rampant gerrymandering from rigging upcoming elections and block voting rights attacks passing in states across the country. It’s more important now than ever that we stand up for our most precious right to vote.

As Martin Luther King III said at the event today, “I never thought I would be living in a country that supposedly has a democracy – we go all over the world spreading democracy – yet we suppress it at home.” 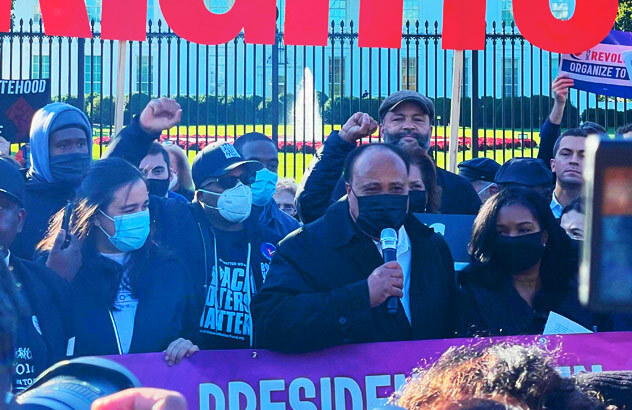 He couldn’t be more right. We must live up to our morals.

The Freedom to Vote Act wouldn’t just ban partisan gerrymandering and dark money, it would also make it easier to vote by setting baseline standards for early and absentee voting nationwide, while protecting our elections from foreign interference. Meanwhile, the John Lewis Voting Rights Advancement Act would restore critical provisions in the 1965 Voting Rights Act that have been gutted by recent Supreme Court decisions, most recently Brnovich v. DNC.

Here’s the thing: Most Americans support these common-sense voting rights bills, and a majority of Senators do too.

In fact, support for the Voting Rights Act has historically been overwhelmingly bipartisan, including a unanimous 98-0 vote in 2006 that included ten Republicans who are still in their seats. Despite this, the archaic senatorial procedure of the filibuster has brought the Senate to a grinding halt, preventing it from passing popular laws like the Freedom to Vote Act. And get this: The filibuster has been used more and more frequently over the past decade, but it’s not even in our Constitution. This is, frankly, outrageous.

Yolanda King, Martin Luther King Jr.’s granddaughter proclaimed, "My generation can't vote. But we can demand that our leaders do their jobs." Yes, you can, Miss King. Yes, you can.

It’s time to restore the Senate to a functioning body by fixing the filibuster and passing voting rights legislation. Period.

That’s why hundreds of voting rights champions gathered in front of the White House to demand that President Biden use the bully pulpit to lead on voting rights – before it’s too late. In Josh Silver’s words:

“President Biden promised to restore the soul of America, and made restoring our democracy and passing voting rights a top priority. But so far, he hasn’t done enough to ensure the Freedom to Vote Act – our best chance to save democracy – passes. It’s time to turn up the heat. The filibuster in its current form is poisoning our democracy. It’s way too easy for one person to block legislation that the majority of the country supports. There are many ways we could fix the filibuster to restore the Senate, and it’s time for the president and senators to choose saving democracy over an arcane rule.”

We are proud to have been a part of this necessary civil action and all of the supporters who showed up to demand President Biden prioritize fixing the filibuster to pass the historic Freedom to Vote Act this year.

The fight isn’t over, and we cannot do this work without you. Call the White House to demand that President Biden reform the filibuster to pass voting rights legislation that will protect our democracy.

Together, we can make sure that every American has equal access to the ballot box. In the United States, our greatest superpower and north star has always been our right to vote in fair, free elections.

Let’s make sure that American dream stays a reality – together.

“When we’re walking in the footsteps of our ancestors we gotta walk strong and walk in song.” - Activists at “No More Excuses: Voting Rights Now” Protest

The Senate recently filibustered the Freedom to Vote Act despite American voters overwhelming support for the bill.

Free and fair elections are a cornerstone of our democracy, and the Senate must break the gridlock and pass this historic Act. The Freedom to Vote Act makes Election Day a holiday, ends gerrymandering, stops dark money in elections, and much more.

Please use the bully pulpit to force the Senate to do whatever it takes to pass the Act this year.