After nearly two months of deliberation, the Wisconsin Supreme Court chose the state’s final congressional, state assembly, and state senate voting maps on March 3rd. The Wisconsin Legislature appealed those maps to the U.S. Supreme court, and in a surprising decision earlier this week, the nation’s high court threw out the state’s legislative maps but kept the congressional map in place.

For the purposes of this blog, I’ll be discussing the maps the state court originally chose. It’s possible that the new maps, which the Wisconsin Supreme Court will be choosing once again, could be different.

While the maps the Wisconsin Supreme Court originally chose were overall fairer and less gerrymandered than what the state legislature originally drew, advocates for fair redistricting maps still have work to do.

In a 4-3 decision, the justices ruled that the maps Gov. Tony Evers submitted best fit the “least change” approach the court laid out earlier in the process. As the name suggests, under the “least change” model, the new maps had to align closely to the previous maps drawn in 2011.

During the last redistricting cycle in 2011, Wisconsin’s voting maps were extremely gerrymandered. Drawn by a Republican-controlled legislature and signed into law by a Republican governor, they unsurprisingly favored  the Republican Party.

In this 2021 cycle, however, Wisconsin has a divided government: Republicans still control the state legislature, but we have a Democratic governor. Therefore, instead of being signed into law, the legislature’s maps were vetoed by Gov. Tony Evers, leaving the courts to decide the future of Wisconsin voting maps.

The Wisconsin Supreme Court ultimately took the case, and in November of 2021, it issued the ruling that said the maps submitted to the court must follow the “least change” principle in order to avoid moving many constituents to other districts.

In an attempt to influence the decision in favor of fairer maps, the RepresentUs Wisconsin team organized, engaging volunteers and coordinating with partners. Because of the inspiring energy and hard work of volunteers across the state, we accomplished quite a bit.

Overall, we engaged over 60 volunteers and had over 200 others pledge to take action for fair maps. Highlights included submitting dozens of letters to the editor by volunteers; serving over 300 free slices of “gerrymandered” pizza to educate the public about the issue in Madison and Appleton; distributing 500 yard signs in support of putting voters over politicians; organizing teachers, small business owners, faith leaders and veterans to sign on to letters asking for fair maps; and coordinating and participating in over 16 anti-gerrymandering rallies across Wisconsin on a bitterly cold day in January. 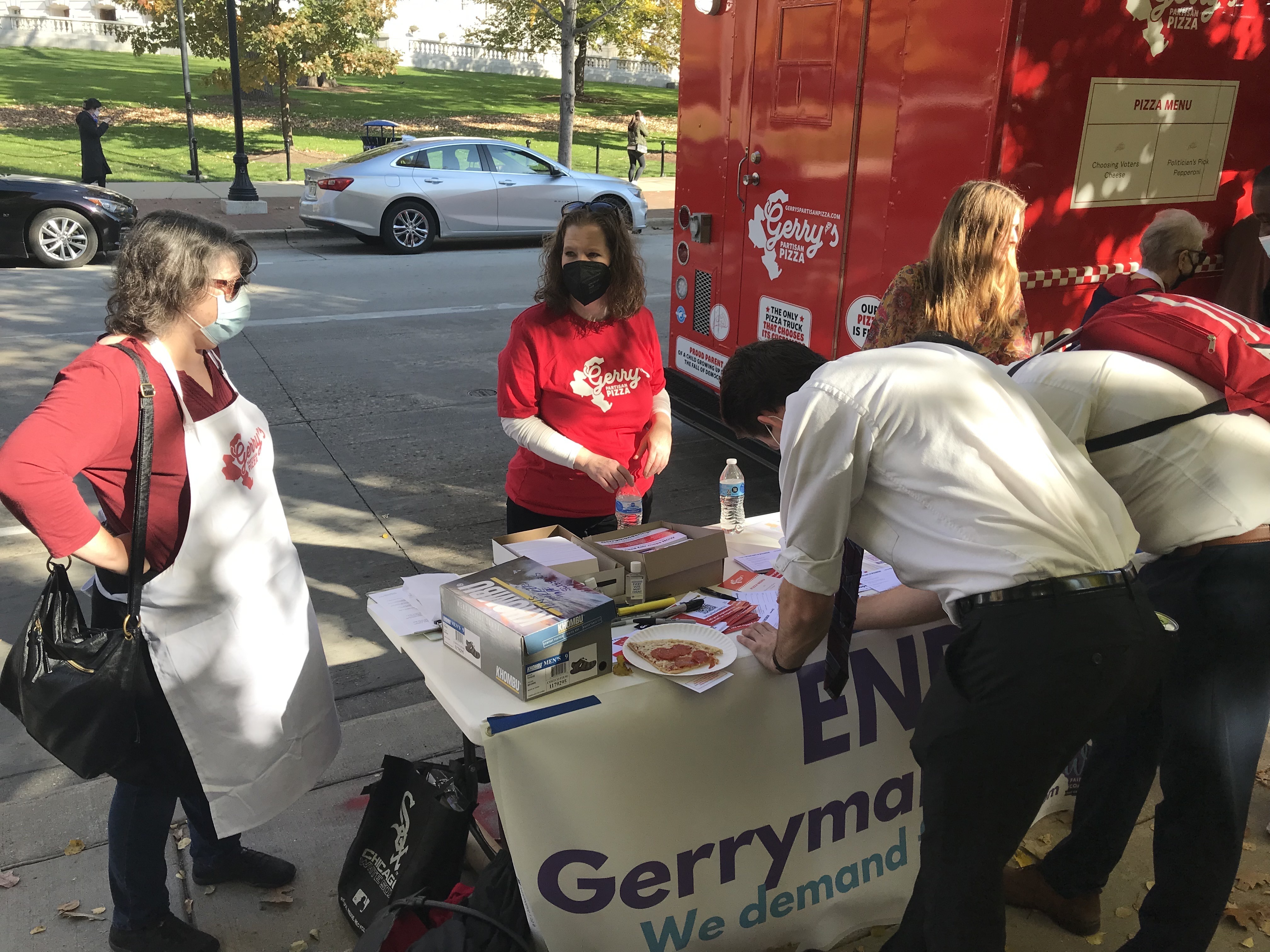 So, how fair were the 2021 Wisconsin maps chosen by the state supreme court?

RepresentUs partnered with the Princeton Gerrymandering Project (PGP) to grade voting maps this cycle. And according to the Redistricting Report Card, the final results were mixed.

According to PGP, the maps for both the state assembly and the state senate earned an overall “A” grade. Even though both maps could have been more competitive and the districts more compact, they scored highly for partisan fairness. Unfortunately, as mentioned earlier, the U.S. Supreme Court threw those maps out, arguing that the state justices needed more analysis surrounding the creation of additional majority Black districts in the Milwaukee area.

The congressional map, which the U.S. Supreme Court kept, on the other hand, flunked with an “F” grade because it maintains that significant Republican advantage. (You might be wondering why a Democratic governor would draw maps that advantaged the other party, but remember the court requested “least change” maps.) 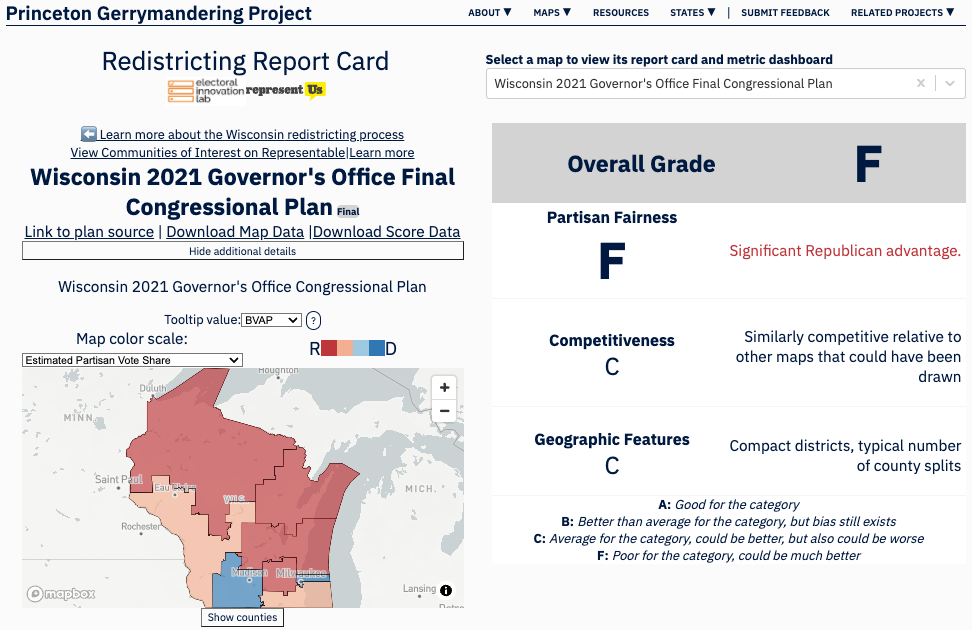 Even though the maps originally chosen by the Wisconsin Supreme Court are not as fair as they could be, and still advantage one party, they represented a step forward. For example, there could be more competitive races for seats in the Wisconsin State Legislature starting this fall and through the rest of the decade.

The implications of that are potentially significant. If it is more challenging for a state legislator to keep their seat, they might be more responsive to the needs and wants of their constituents; work across the aisle to come up with solutions that meet the needs of everyday Wisconsinites instead of catering to special interests or their big donors; and more people may choose to participate in democracy by running for elected office themselves.

Time will ultimately tell, but the step toward fairer maps makes all of these changes much more likely.

While the final decision surrounding the final Wisconsin maps rests in the hands of the courts, urgent work to protect our democracy remains. Right now, we are seeing attacks on Wisconsin elections and election administrators who are committed to the nonpartisan work of running fair and free elections, including directing personal attacks against them. Radical politicians and special interests are also trying everything they can to destroy the bipartisan Wisconsin Elections Commission.

Volunteers across the state are responding to these anti-democratic attacks by forming election protection teams in order to support election administrators at every level across the state. All of us – conservative, liberal, and independent – must take action to protect Wisconsin’s elections in 2022 and beyond.