January 6, 2021 was one of the darkest days for the American Republic. It was a day that threatened to destroy the democracy and institutions we hold dear.

But while we managed to narrowly avert that crisis in 2020, the plans for the next January 6 are already in progress. A growing threat to the 2022 and 2024 elections is underway, and it could be successful if democracy-minded patriots don’t step up. The funders and operatives behind January 6 and the election denial movement are carrying out a coordinated attack on independent election administration, and with it, our entire election system.

Here’s what you need to know.

The story starts with the “Election Integrity Network (EIN),” a well-funded and well-organized project of the Conservative Partnership Institute (CPI). CPI is run by former Sen. Jim Demint and former President Trump’s final Chief of Staff Mark Meadows. CPI senior legal fellow Cleta Mitchell is the main actor behind the EIN. Mitchell is most well-known for helping Trump’s campaign spread the lie that there was widespread election fraud in 2020. She was even on the infamous phone call when President Trump asked Georgia Secretary of State Brad Raffensperger to “find” votes for him to win.

EIN has a multi-million dollar budget and is using provocative messaging and disinformation to recruit people into attacking our elections. They have 18 state organizers, 19 lawyers on retainer, and have already held summits in six states. They also released a distributed guide for individuals who want to build their own chapters.

The guide is full of carefully-crafted strategies – in addition to conspiratorial language – to encourage statewide and local groups to surveil and undermine nonpartisan election processes. It's an attack on free and secure elections that is much more organized and resourced than we previously thought. 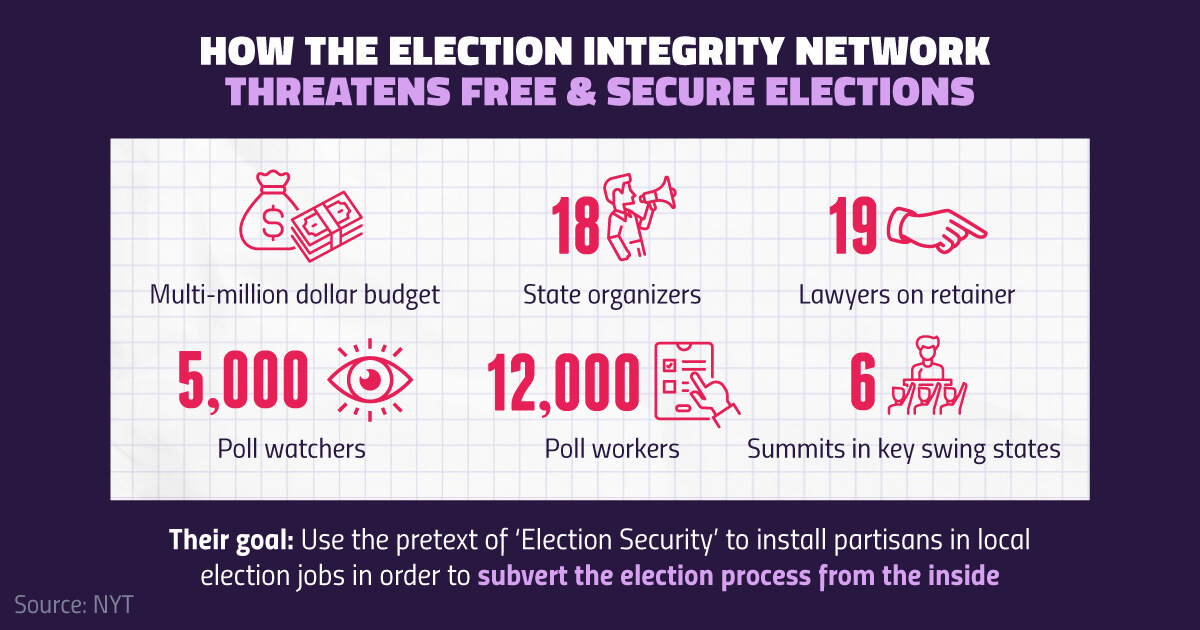 Using the “precinct strategy” to attack our elections

EIN’s main focus is encouraging election deniers to become a member of statewide “Election Integrity Chapters,” which directly challenge actual election workers. As we have written about before, this “precinct strategy” of focusing on community-level election administration posts and processes is a key way that bad actors are seeking to undermine our elections.

EIN is deliberately tricking people to believe the myth that the 2020 election was stolen. By joining EIN's effort, they are told they can “protect” the 2022 and 2024 elections. On its own, giving disinformation to an energized base of supporters who believe in conspiracies about the elections is a dangerous tactic. But giving those same supporters the tools and resources to fulfill an extreme level of surveillance and tracking threatens to imminently obstruct the basic administration of elections.

Driven by individuals who already believe fraud is occurring, it is not hard to imagine EIN’s suggested tactics becoming extremely disruptive, chaotic, and potentially even violent. If EIN volunteers find themselves unable to get the answers they are told to get, or election administrators are unable to answer satisfactorily, volunteers could quickly become wrongly suspicious of fraud or election tampering.

This creates a vicious cycle of chaos around elections and gives authoritarians the pretense to step in to “fix and de-escalate” the situation. Election workers are already facing unprecedented threats and harassment. Encouraging people to gum up the works, spread disinformation, and undermine trust in the election system will only increase these threats and make it more likely that workers quit.

Ultimately, this is the goal of organizations like the EIN: Sow enough chaos surrounding an election – despite it being free from widespread fraud – that instead of elections being called by a nonpartisan body, a partisan political body such as a county board of elections or state legislature steps in to intervene and decide the winner.

It is one part of a larger network of election-denying officials setting up the path to undermine future elections. EIN-associated poll workers and observers do not have to succeed in finding fraud or manipulating vote tallies to potentially change the outcome of an election. Creating chaos becomes the opportunity for another January 6th.

How we stop election subversion

Nonpartisan election administration is necessary for democracy: we need elections that are decided by an impartial system, not politicians who have party loyalties. RepresentUs is proud to be one of the nonpartisan groups fighting back against authoritarian forces in the states, but we can't do it alone – we need to raise awareness about this attempt to subvert elections..

It can seem daunting to have to go up against a well-organized, dark money-funded extremist network. But by uniting behind the fight for our democracy, our movement can be just as organized with the resources to make elections secure across the country. We saw – and continue to see in Congressional hearings – how January 6th marked a turning point for our nation. We cannot let that fear and hate win. We must turn these feelings into action to protect our democracy.

Here's how you can help: Sign up below to join the democracy movement, send this blog to three friends and ask them to do the same, and if you're able, donate to the Common Wealth so that the movement has the resources to invest in a government that represents us.