In the lead-up to the 2020 election, RepresentUs launched a national campaign to Save the Vote – reaching 23 million Americans and pressuring decision makers across America to protect our right to vote safely and securely.

America's broken elections already make it near-impossible to elect majority winners, get special interests out of elections, and hold politicians accountable. But 2020 was a year unlike any other: When COVID-19 spread across America, it threatened our access to safe voting options. Then, our president spread misinformation about the security of mail-in voting and refused to commit to a peaceful transfer of power.

We couldn't stand by and let American democracy fail. We launched a nationwide campaign to Save the Vote, designed to expand access to safe voting options, increase public awareness about voting options, and outline steps every American could take to defend our democracy. Protecting American elections isn't about partisanship — it's about ensuring that every voter's voice is heard and their vote counted.

Thousands of progressives, conservatives, and independents came together to protect the integrity of the 2020 election and ensure every voter has their voice heard. Here’s a snapshot of just some of the many actions you all took to help Save the Vote:

Save the Vote Highlights

We fought for expanded access to absentee voting in 11 states. 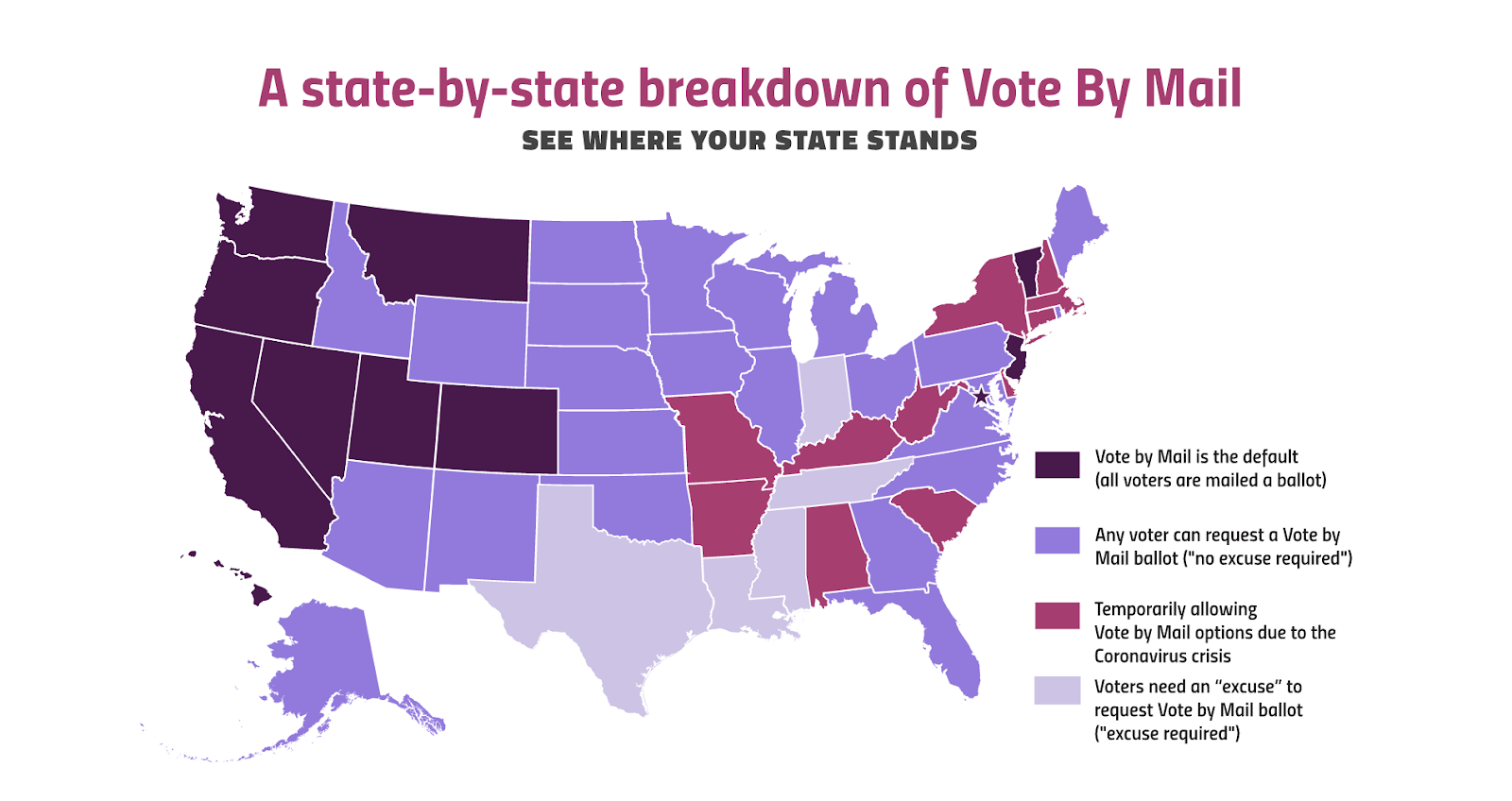 When COVID-19 hit in the middle of the presidential primary, we knew that the ability to vote had become a life-or-death issue to some Americans. Expanding absentee voting would allow Americans to vote safely from home, but it wasn't available in some states.

RepresentUs published a comprehensive absentee voting resource to help voters in all 50 states know what their voting options were, and put pressure on state election officials to expand vote by mail options before the primaries. Our campaign was picked up by Axios, CNN, and Rolling Stone, ramping up the pressure on states that were trailing behind on voter access.

At the start of our campaign, most states didn't offer absentee voting options – by the end we helped convince 11 states to offer coronavirus as a qualifying excuse for absentee voting.

When the President Went Too Far, We Took a Stand

President Trump began spreading lies about mail-in ballots, falsely claiming that vote by mail is not secure. Then, months into this misinformation campaign, President Trump crossed an alarming line: He refused to respect the vote count and commit to a peaceful transfer of power.

RepresentUs is a fiercely nonpartisan organization – and we must act no matter who attacks our elections. We published a full page ad in the New York Times calling on the president to resign if he wouldn’t commit to a peaceful transfer of power. 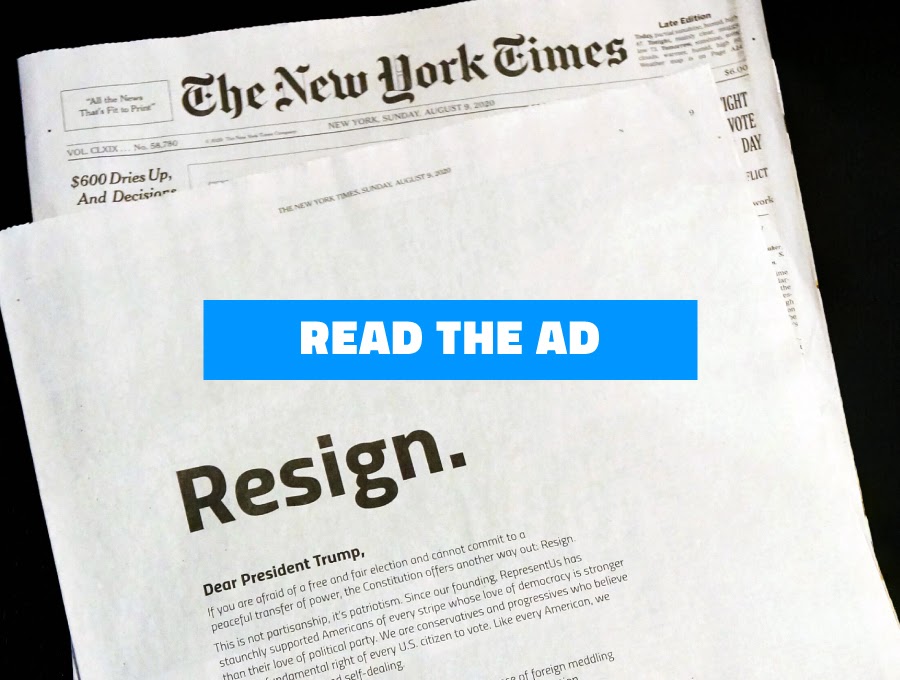 We built a toolkit to fight misinformation, giving Americans everywhere the opportunity to combat misinformation themselves with imagery and facts they could share with friends and family, along with resources on how to request a mail-in ballot.

We responded to the president directly online and continued to direct and help folks turn in their mail-in ballots.

We Released an Attention-Grabbing Ad for the First Presidential Debate

With the first presidential debate about to begin, millions of Americans still weren't aware of the threats to our democracy. We made a deep-fake video ‘starring’ Kim Jung-Un to deliver a stark message to the American people: Do nothing, and democracy will die.

More than 750,000 people watched, and thousands joined the Save the Vote campaign after seeing this alarming video.

With millions of Americans using mail-in ballots for the first time, we realized there was a huge problem: It's pretty easy to fill out your ballot wrong.

Take Pennsylvania, a swing state that could determine the entire outcome of the election: Voters in this state have to put their ballot inside an envelope inside another envelope… or it's a "Naked Ballot" and gets thrown out.

Voters needed a reminder: Read the instructions. RepresentUs worked with Sarah Silverman, Chris Rock, Amy Schumer, and many more celebrities to get naked to spread the word about naked ballots and remind voters to follow the directions. The video, released unbranded and shared by dozens of partners, reached over 16 million Americans.

The race for president has always been determined by the vote count – with state lawmakers sending electors based on the will of the voters.

When President Trump's campaign went on the record saying they were in talks with state lawmakers to reject the vote count and appoint false electors to the electoral college, we sounded the alarm. Americans from across the political spectrum sent tens of thousands of messages to state lawmakers demanding that they honor the will of the people.

We Prepared America for Delayed Results with #ElectionWeek 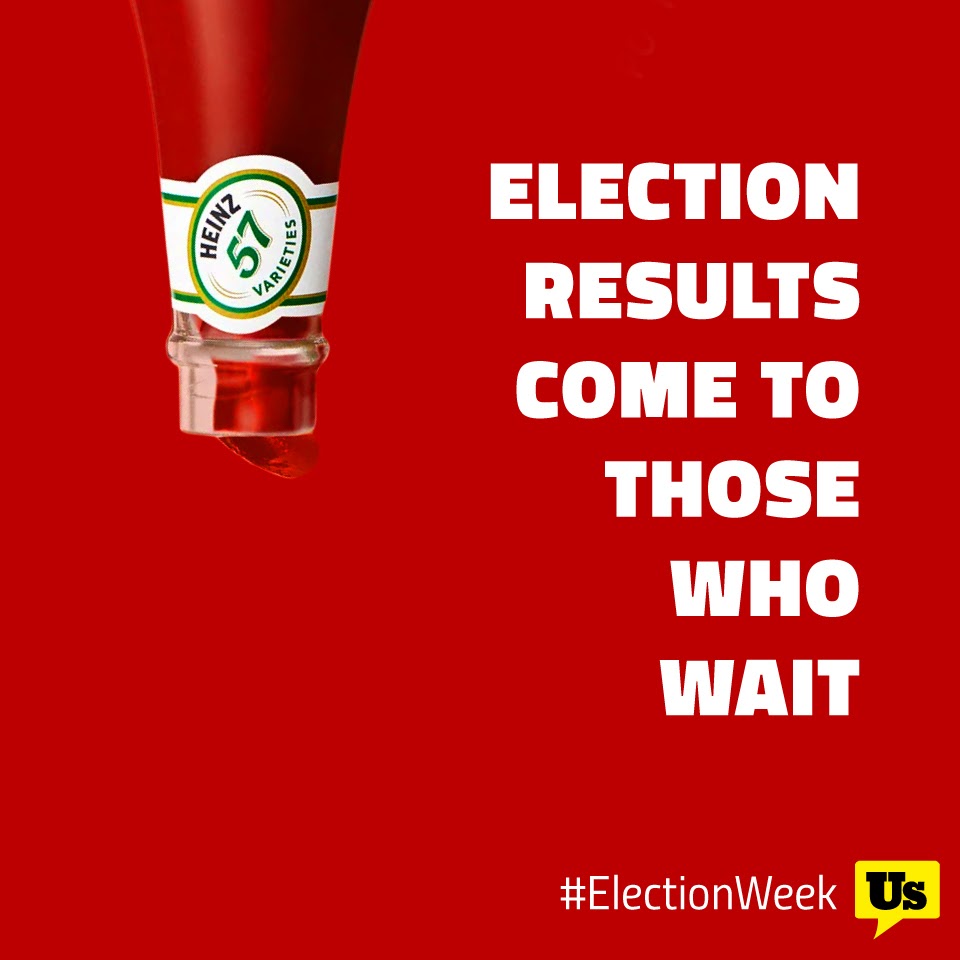 With more Americans voting by mail than ever before, election officials were warning that results would likely not be known on November 3rd – but about half of Americans still expected results on election night. This mismatched expectation could have lead to Americans pressuring their states to call the election before the votes were counted, and feed anti-voter attempts to steal the election.

We started a public awareness campaign to get Americans on board with waiting for the results: #ElectionWeek. Through eye-catching imagery created by RepresentUs volunteers, a social media toolkit, and sharing resources on how results would be counted, we spread the word that Election Day could extend to a week or more to allow for all votes to be counted.

Saving the 2020 election is only the beginning. The anti-corruption movement is growing stronger every year because conservatives, progressives, and everyone in between are coming together to demand we fix our broken political system. We are already fighting for the next opportunities to fix America's broken political system, and with your help we can win.  Sign up below to join the fight today.