The midterms are less than 50 days away. On November 8, voters across the country will weigh in on ballot measures that will shape American society for years to come, including voting rights, abortion and taxes. But according to new research released Tuesday, politicians in 11 states are trying to stop voters from passing ballot measures in future elections.

A first-of-its-kind report and interactive map from the nonpartisan group RepresentUs demonstrates the multi-faceted threat to direct democracy. Politicians are carrying out an unprecedented legislative and legal strategy to take away voters’ ability to pass laws through ballot initiative. This process is the only way voters can pass popular laws when their elected officials fail to act. 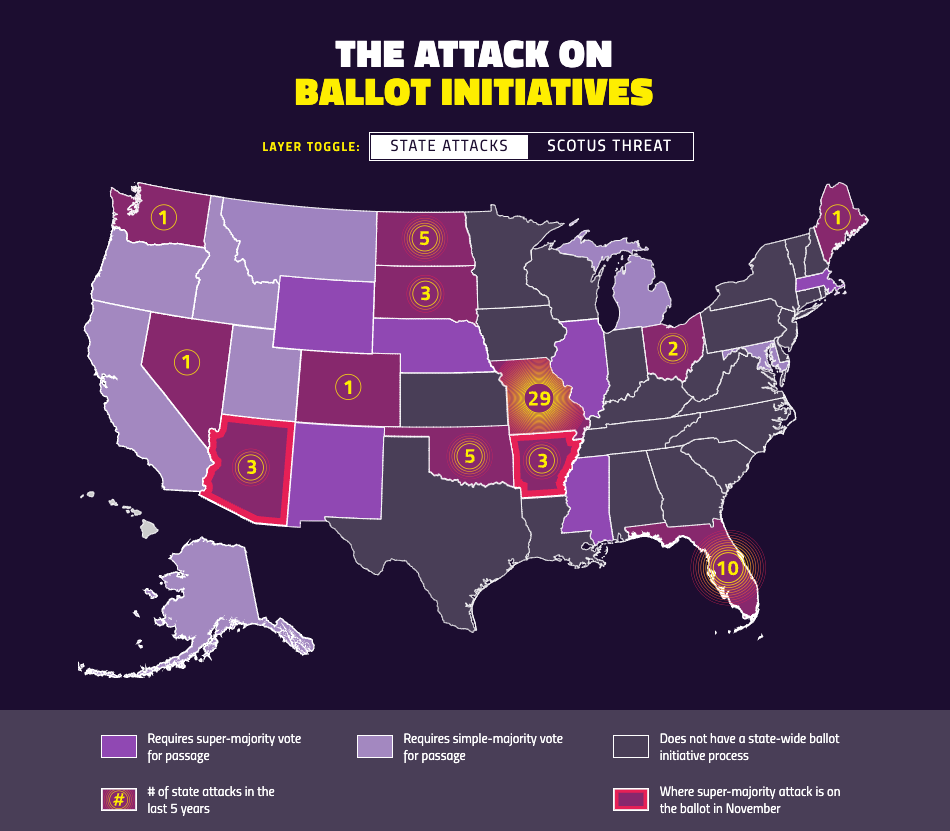 In the last five years, the research report found that politicians in 11 states have proposed at least 64 bills that would make it much harder for voters to pass ballot initiatives. Specifically, these bills attempt to impose a supermajority requirement – which means increasing the threshold for passing an initiative from a simple majority vote (50% plus one) to a 55%, 60% or ⅔ vote. If supermajority requirements were the standard for passing ballot initiatives, countless important laws would never have passed, including women’s suffrage, gay marriage and ethics reforms.

“When our government isn’t responsive to the people, ballot initiatives are one of the tools that can rein in the power of self-interested politicians and give it back to the voters – where it belongs,” said RepresentUs CEO Joshua Graham Lynn. “Instead of spending their time strangling the voice of the people, elected officials need to uphold it. What are they so afraid of?”

The 2022 midterms will set a record for the number of attacks on the ballot initiative process in the past 30 years. In Arkansas and Arizona, voters will have the opportunity to reject supermajority measures on November 8. And in South Dakota, voters already defeated an attack on their direct democracy process in June.

In addition to the legislative threats to ballot initiatives, the map also calls attention to another looming threat. The Supreme Court’s Moore v. Harper case could open the door for certain voter-passed laws to be overturned. The justices could rule next year that only state legislatures have authority to make rules about federal elections. That means, for example, that Alaska’s top-four nonpartisan primary and Ranked Choice Voting general election could be at risk since it was a ballot initiative passed by the voters in 2020. 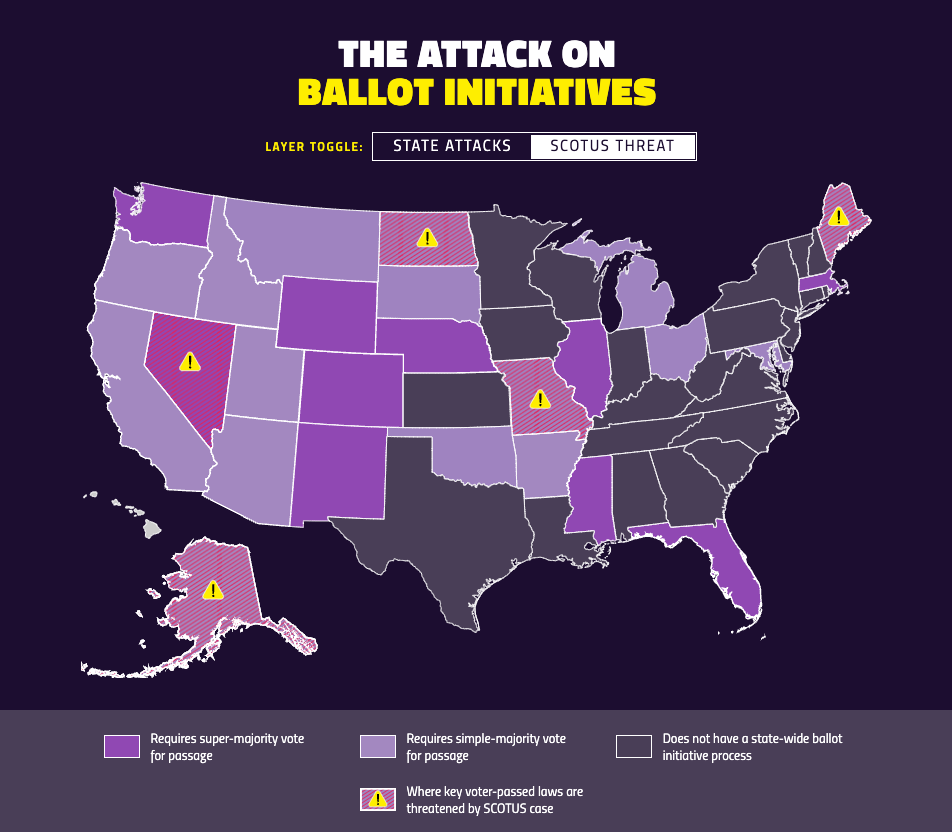 “This will be the most important democracy case heard by the Supreme Court in years. The Court's decision could drastically propel our democracy forward, or cripple it,” said Lynn. “At the end of the day, this is about our rights as voters and as Americans. Politicians don’t need more power than they already have. We want to make it clear to the Court that the people should always be able to hold politicians accountable and have the most powerful voice in our government.”

Using the map, the public can learn more about threats to the ballot initiative process in their state. RepresentUs will continue publishing new research on this issue – both highlighting the ongoing threat to direct democracy, as well as opportunities for progress.

RepresentUs is America’s leading nonpartisan organization fighting to protect and strengthen democracy. We unite unlikely allies from across the political spectrum who put country over party to pass pro-democracy laws, fight corruption, and defeat authoritarian threats. We have won more than 160 victories in cities and states across America since our founding 10 years ago. Each win is one step closer to our vision of making America the world’s strongest democracy.