RepresentUs releases comprehensive report rating all 50 states on gerrymandering risk; Urgent to pass redistricting reforms in the “For the People Act” 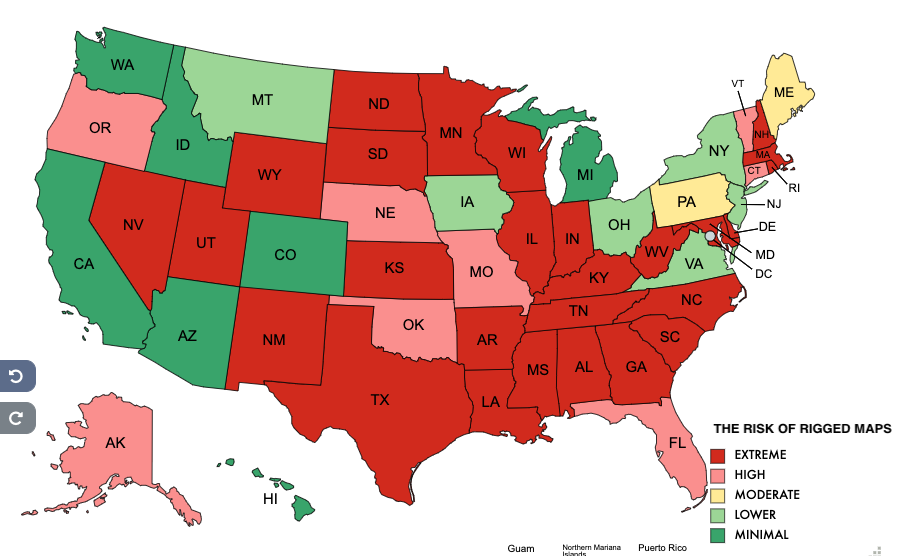 April 5, 2021 (Washington, D.C.): Thirty-five states are at extreme or high risk of partisan gerrymandering, according to an in-depth, one-of-a-kind report released by the nonpartisan, anti-corruption organization RepresentUs. The Gerrymandering Threat Index rates all 50 states - and the results show the urgent need to pass the redistricting reforms within the For the People Act, that would end partisan gerrymandering at the congressional level.

“This report makes it clear that gerrymandering is a national crisis that needs an urgent and bold solution. Politicians are already preparing to pick their voters during this year’s redistricting. But with the For the People Act, Congress has a chance to stop them before they get started,” said Josh Silver, CEO, and Cofounder of RepresentUs. “If this critical bill doesn’t pass, 188 million Americans will be stuck with corrupt and unaccountable representatives for the next ten years.”

Highlights from the Gerrymandering Threat Index:

RepresentUs gave a risk rating to each state by addressing these 5 key questions:

“We studied the laws on the books to determine where there are clear safeguards—and where there aren’t—and then assigned an understandable rating to make the threats clear,” said RepresentUs Research Manager Jack Noland.

“The For the People Act takes power away from politicians who rig maps to benefit themselves and puts it in the hands of people,” said Silver. “This is the biggest opportunity in 50 years to pass extensive anti-corruption and elections reforms.”

RepresentUs is mobilizing its members to contact their representatives through its For the People Act online resource hub. The For the People Act would implement a large portion of the policies RepresentUs has been pushing for in the American Anti-Corruption Act, our model legislation designed in 2012. RepresentUs took a leading role in defending our elections in 2020. To date, our movement to put voters first has passed more than 120 transformative laws and resolutions in cities and states across the country.