“The President of the United States is staging a coup….He is pressuring swing state lawmakers to throw away the election results, ignore the will of the people and declare him the winner. If this illegal seizure of power were happening in any other country, we would call it what it is: an attempted coup d’etat.” 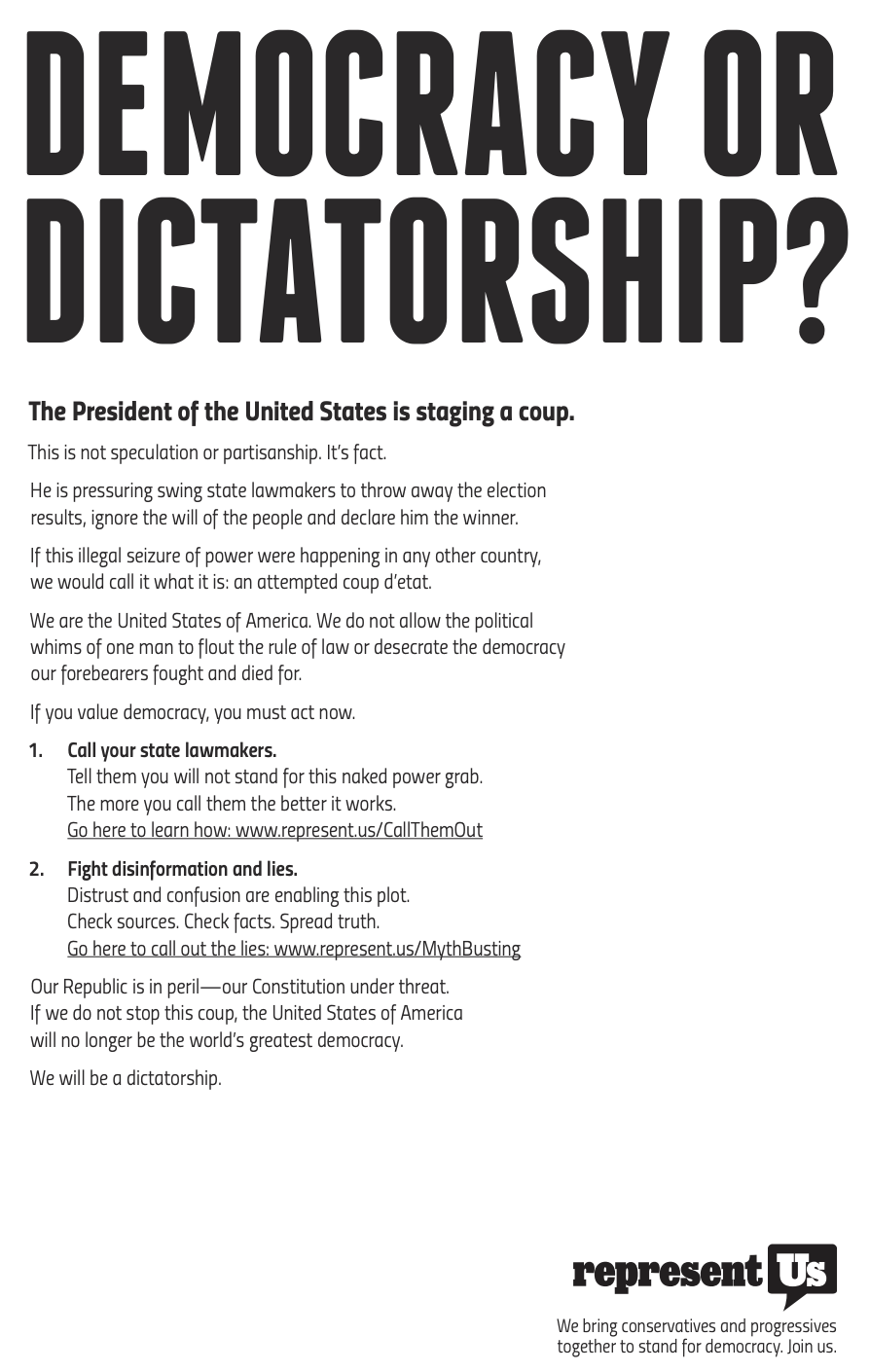 November 22, 2020 (Florence, Massachusetts) - A full-page ad appearing in the Detroit Free Press from the nation’s leading nonpartisan democracy organization RepresentUs warns that the American President is attempting a political coup d’etat in plain sight, and that Michigan state legislators face a dire choice between democracy and dictatorship.

The ad is in response to President Trump’s latest attempt to overturn election results based on false allegations of election fraud. After failing in his legal efforts, he is now attempting to compel election officials in the key swing states of Michigan, Pennsylvania, and Wisconsin to block certification of ballots, even inviting Michigan officials to the White House. This effort to run out the clock, enabling the state legislature to send alternate electors, threatens to overturn the will of the people.

“America needs to wake up, right now. The President is causing serious damage that will take years to undo. If the leader of another country was trying to steal an election, we’d call it a coup. That’s exactly what we should be calling it here in the US. It’s imperative that Michigan and other states certify the results which have been upheld by audits and the courts,” said RepresenttUs CEO and Co-Founder Josh Silver.

All 83 counties in Michigan have certified the election. The President’s tactics threaten to disrupt the November 23 statewide certification of the election by the Board of Canvassers. “We thought American democracy was made of brick and mortar, and resistant to attacks from would-be authoritarians like President Trump. He is showing us that it is not. It is fragile. It needs to be defended, and after this tsunami of an administration passes, it needs to be rebuilt and reinforced, in case another storm hits our nation,” concluded Silver.

RepresentUs is mobilizing members across the country to contact their state officials and demand they certify the election results. Check out the schedule of certification in key states here.