While the national spotlight has been focused on Democratic politicians furiously debating over the spending package in the Build Back Better bill, Congress has continued to function and vote on other measures in the meantime. One of the more crucial operations of Congress is to determine funding levels for numerous government agencies. Right now, Congress is determining funding for the 2022 fiscal year, even as the debate over the Democrats’ massive infrastructure bill rages on.

While Democrats have been forced to cut massively popular programs from their bill, such as paid family leave, free community college, and measures to combat climate change, the Pentagon has had no such issues acquiring funding. In fact, on October 18th, the Senate Appropriations Committee, the committee tasked with setting spending levels for government agencies, put forward a proposal for $725.8 billion in funding for the Department of Defense, a full $10 billion more than President Biden requested in his 2022 budget proposal.

As the Senate Appropriations Committee itself noted, “This amount is $29.3 billion more than the fiscal year 2021 enacted level.”

While the previously mentioned proposals such as paid family leave, free community college, and fighting climate change have hit the chopping block, Congress has managed to consistently find seemingly endless amounts of money for the Pentagon and American defense contractors. As the New York Times reported this week, the United States is one of just six countries in the world “without any form of national paid leave.” Meanwhile, the United States spends more on defense than the next eleven countries combined. 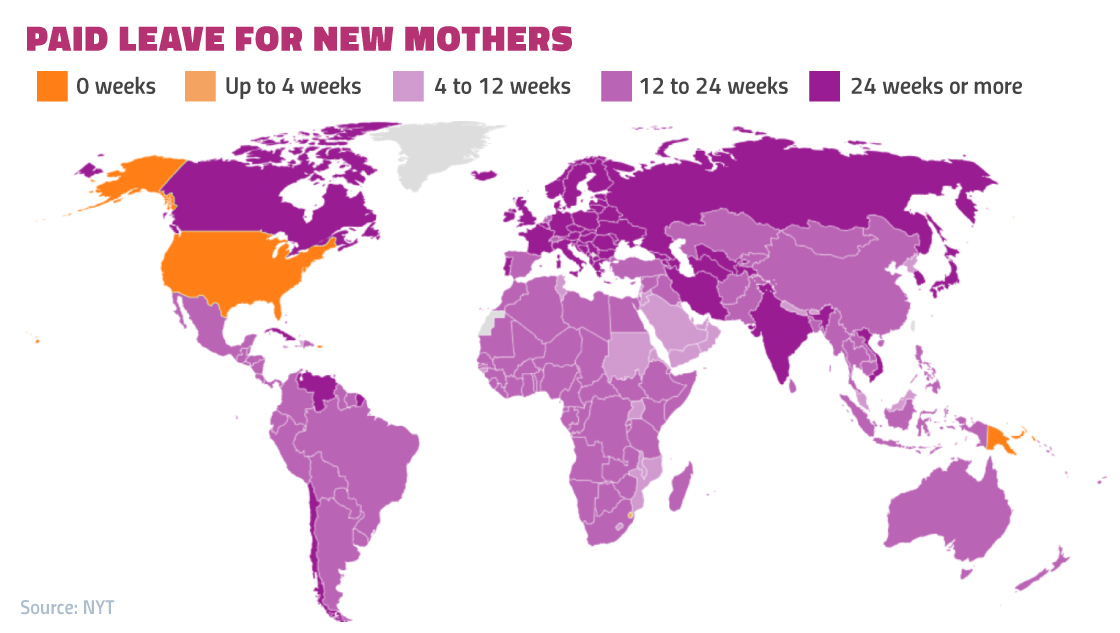 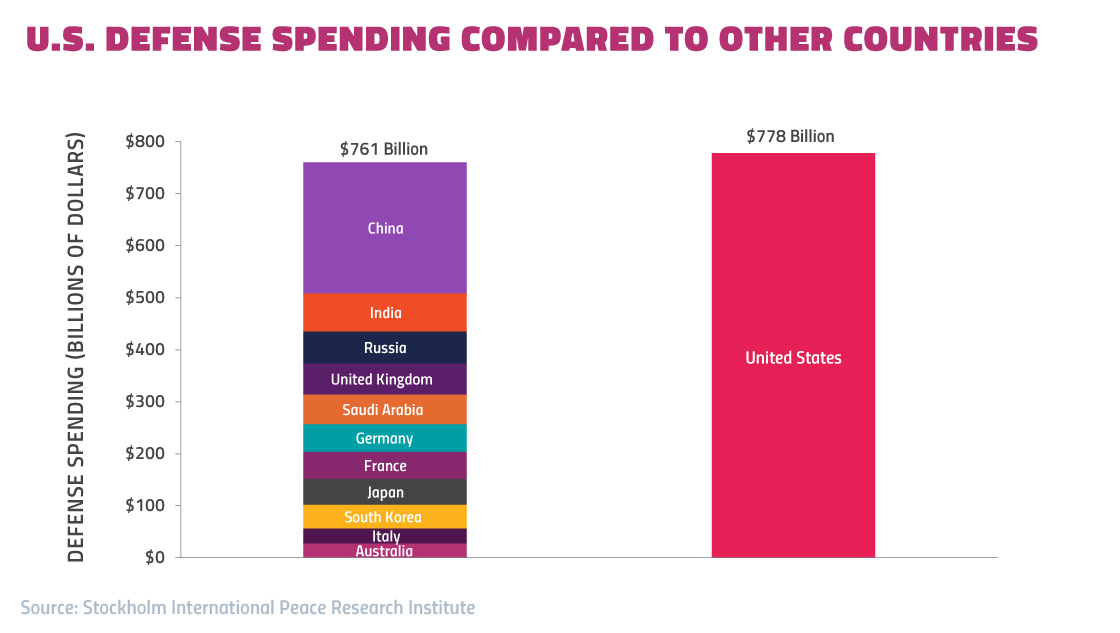 Further complicating matters is that these actions by the government are not necessarily popular. According to a May 2021 poll of 1,070 likely 2020 voters conducted by the Global Strategy Group, 84% of likely voters supported paid leave. This survey also found broad bipartisan support for this policy, with 96% of Democrats, 81% of Independents, and 74% of Republicans expressing support for paid leave.

As for defense spending, there have been numerous polls conducted over various years, with differing results. A July 2020 poll from Data for Progress of 1,235 American voters found that 56% of all voters supported “cutting the defense budget by 10 percent to pay for priorities like fighting the coronavirus, education, healthcare & housing.” Meanwhile, a more recent poll from Gallup in February of 2021 found that 30% of voters thought the United States spends too much on defense, with 42% supporting the current level of spending. In other words, 72% of voters saw no need for an increase in defense spending, yet the Senate plans to provide the Pentagon with nearly $30 billion more than last year.

As Roll Call reported in October, Congress actually refused the Pentagon’s requests to move funds to programs Pentagon leaders deemed more important. More than $1 billion of funds that the Pentagon leaders requested to shift to other higher priorities were blocked by Congress. The Pentagon wanted to shift this money away from defense contractor spending towards other priorities, including to “compensate the National Guard for border security work or to keep buying semiconductors for weapons from a company that is going out of business.” Instead, Congress denied the Pentagon’s request and ensured the funds kept flowing toward these highly profitable and powerful defense contractors.

These requests, also known as “reprogramming requests”, and Congressional blocking of them, are common. However, all four Congressional Appropriations and Armed Forces committees (in both the House and Senate) did not provide Roll Call with any reasoning for their decisions, highlighting how opaque and inaccessible these processes of American foreign policy are to the general public.

As Roll Call notes, almost half of the funds that Congress prevented the Pentagon from shifting around were earmarked for defense contractors. Although known for creating jobs, American defense contractors are also notorious for their tendency to “spend on campaign contributions and lobbyists,” in an effort to secure lucrative federal contracts. The F-35 fighter jet is a prime example of how Congress often puts politics over defense priorities. The F-35 is manufactured with “parts made in nearly every state,” and correspondingly, over the last seven years Congress has spent an average of $2 billion additional funds annually on F-35s that the Pentagon did not request.

As Mark Thompson, an analyst with the government watchdog group Project on Government Oversight told Roll Call, “Military spending is always political, whether it’s put together inside the Pentagon or pureed on Capitol Hill.”

Meanwhile, Raytheon CEO Gregory Hayes, who raked in almost $21 million in pay last year, bemoaned the lost revenue that the withdrawal from Afghanistan would have on his company. As reported by Responsible Statecraft, Hayes had this to say during a call with shareholders:

“So the lost sales on the defense side, I would category — three categories of issues there. One, I think the pullout in Afghanistan, there’s about a $75 million impact to full year revenue, not huge but meaningful.” 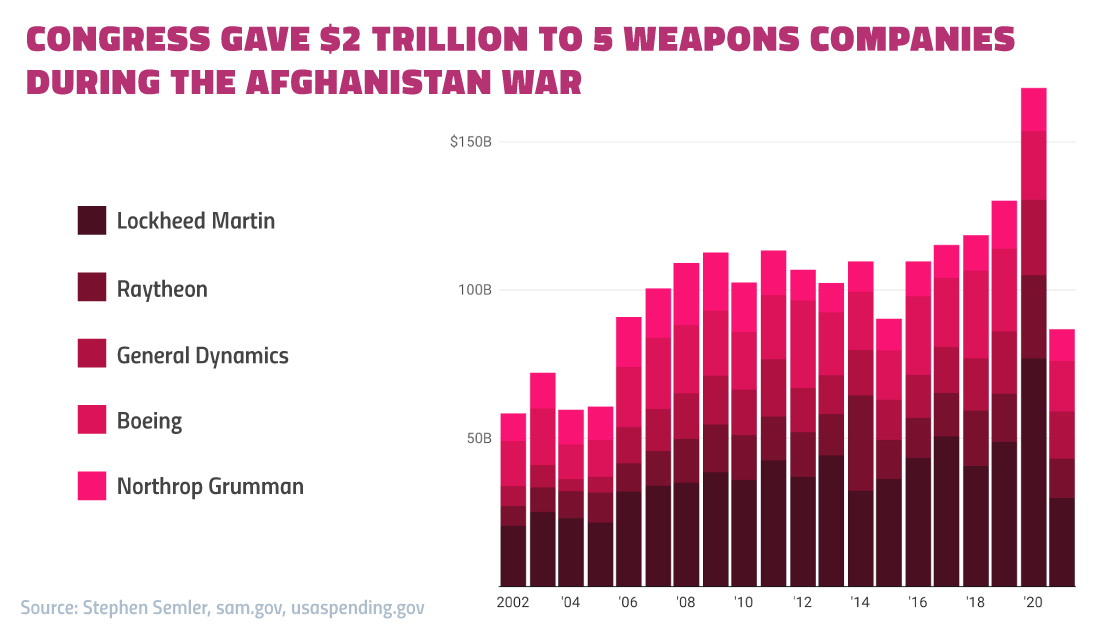 Raytheon is one of the largest American defense contractors and made a grand total of $57.1 billion in sales in 2020, according to their own annual report. Raytheon, along with the other top five defense contractors Lockheed Martin, General Dynamics, Boeing, and Northrop Grumman, spent a total of $1.1 billion on lobbying in Congress from 2001 to 2021. Over those 20 years, these companies in turn received $2.2 trillion in funding from Congress.

RepresentUs has documented the threats deep-pocketed special interest groups and unregulated lobbying pose to our democracy, and the military industrial complex is just another aspect of this dilemma. While Congress debates crucial and popular measures such as paid family leave and improving American infrastructure, defense contractors and the military receive massive amounts of government funding.