Since the Supreme Court decided the infamous Citizens United court case in 2010, political spending by special interests and the mega-rich has boomed. A new report from Issue One underscores just how bad it’s gotten. Thankfully, there’s a bill in the Senate right now that would stop billionaires from buying our elections — if you help it pass.

A dozen mega-rich — 6 Democrats and 6 Republicans, 8 of them billionaires — have donated $3.4 billion to federal campaigns since 2009. That means that, for every $13 dollars spent on federal campaign donations in the past decade, almost $1 came from one of just 12 individuals or couples.

And yes, you read that right: This doesn’t even include giving to state-level campaigns, which have raked in another $27 billion since 2009.

So who are these people? Well, they’re just like you and me. They co-founded Facebook, made it big on Wall Street, or — in a totally normal and relatable way — are an heir to a family fortune from the Gilded Age. 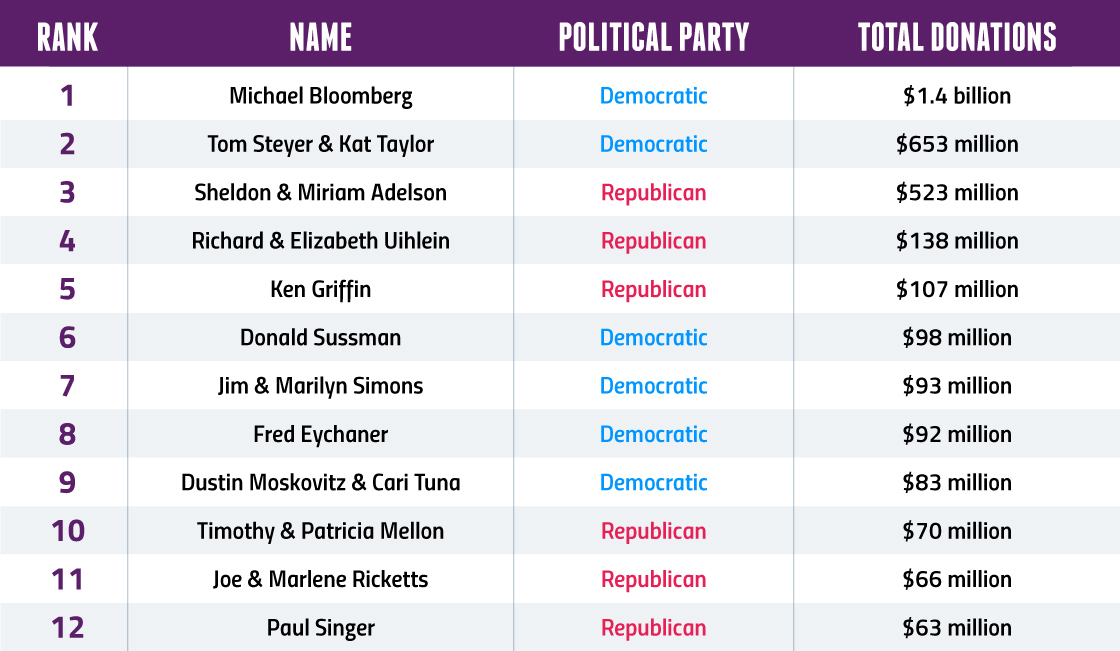 Over a third of the total donations came from Michael Bloomberg alone, who famously poured $1 billion into his own failed presidential campaign.

Remember: money buys access. Money means you can hire lobbyists, influence politicians, and literally write legislation that will benefit yourself. It’s a major reason that the average American has no impact on public policy.

The surge in small dollar donors? Yeah, the super wealthy also control that

If we’re going to have a political system dictated by dollars, at least regular people are gaining a little bit of ground. (That “optimistic” take helps to hold back the nausea when you realize that means almost 80% of fundraising comes from elite donors.)

Does that mean the people donating to political campaigns are beginning to represent the people? Not so fast.

The top 100 zip codes responsible for all political donations hold less than 1% of the total population, and they accounted for 20% of spending since 2009. These zip codes are also whiter and richer than the nation as a whole.

And in some of those 100 zip codes, there aren’t even any people — just skyscrapers and PO boxes for wealthy business people.

If it feels like billionaires control our elections, it’s because they do. If this makes you feel hopeless, keep reading to find out how we can stop this toxic cycle.

The Freedom to Vote Act is our best chance to stop billionaires from controlling our politics. It won’t pass without your help.

In addition to piloting innovative ways to get money out of our politics, the For the People Act would shine a light on dark money,.

The For the People Act passed the House earlier this year and now the Freedom to Vote Act will be voted on in the Senate in the coming months. Majorities of Americans — Democrats, Republicans, and Independents alike — support this powerful bill. So much so, billionaires are scrambling to figure out how to poison such a popular bill.

Those same billionaires who control our elections — and the politicians who rake in their cash — are terrified of this bill passing, because it would give American voters real political power. They’ve already sunk over $20 million into a smear campaign in a desperate attempt to poison the bill.

The best way to fight back against the elite political establishment is with a groundswell of grassroots people power. How do we do that? Take 60 seconds to send a message to your Senator demanding they vote YES on the Act when it comes to the floor.

I’m writing to demand you vote in favor of the Freedom to Vote Act when it comes to the floor.

70% of Americans, including a majority of Democrats and Republicans, support this bill. The Freedom to Vote Act isn't a matter of left vs right — it's about common-sense reforms to unrig our political system and make sure the voices of the American people are heard.